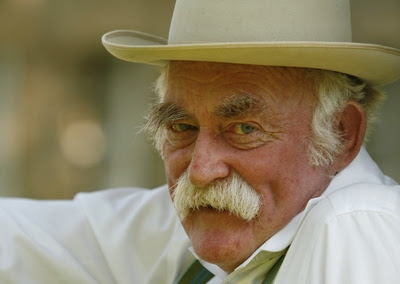 Donald McCaig, border collie man, sheep man, Virginian, celebrated novelist, defender of working dogs, poet, essayist, and author of the New York Times best sellers, Eminent Dogs and Dangerous Men and Rhett Butler's People, writes of yesterday's post about Sick Puppies and Broken Dogs in which I note that the hierarchies of the Kennel Club and the Catholic Church have a lot in common when it comes to winking at systematic abuse:

I think Patrick has an analogy that is apt. When we Border Collie people tried to convince the AKC that conformation breeding would destroy the sheepdog's working ability and, hence, change the breed into something else, we were astonished that they didn't care. At first I thought they were entirely indifferent to dog well being - only after a long time (and long struggle) did I understand that their belief in the value of conformation breeding and showing was quasi religious - a matter of faith.

And what we faced wasn't -as we had thought - a simple matter of informing them what the certain consequences would be once they started breeding Border Collies by quite different standards - we had a theological dispute.

We knew the show bred Border Collie would become, after several generations, unable to do its traditional work. They believed they were taking a rough piece of doggy clay and "refining" it so it might accompany the gentlefolk anywhere.

The AKC's obliviousness to the harm they have done is analogous to the harm the Catholic church has done, but it's important to realize that they didn't create that harm because they were the spawn of Satan or dumb as rocks.

The Catholic church believes that all souls are redeemable - that every compulsive pedophile can confess his sins, ask for God's help, and stop buggering choirboys.

This is an core tenet of almost every Christian church. Yes, you can be saved. Go and sin no more. Sure the church had venial motives for protecting priests but, BY ITS OWN BELIEFS, it was also protecting the priests' immortal souls. Those choirboys were collateral damage.

So too the AKC. If a few dogs are malformed for the showring, if the cost in dog/owner suffering is very high, look at all the handsome, refined breeds that DON'T have health problems. Wouldn't you like to own an improved canine aristocrat? Genetically compromised breeds are collateral damage.

Those of us who think the damage is more important than the successes can learn a lesson from Rev. Harold Camping's congregation.

Most of us imagine that predicting the end of the world, and the world not ending, is a a deal breaker. But most of the Rev's congregation still attends, pays their tithes, and believe Rev Camping's a prophet. End of the world? Well, nobody gets it right all the time!

A recent study of such congregations (can't remember where I read it) noted that the "deal breaker" for most of us (End of the world, buggered choirboys, bulldogs unable to breathe) is a minor glitch to true believers. (Eric Hoffer is still pertinent). The True Believer is surrounded by other True Believers and to abandon the core beliefs (redeemability of souls, betterment of breeds, the validity of prophecy) is to enter the unfriendly, incomprehensible darkness where decent people dare not venture.

Thanks for sharing this, Patrick.