The AKC is Ready to Ruin the Laekenois 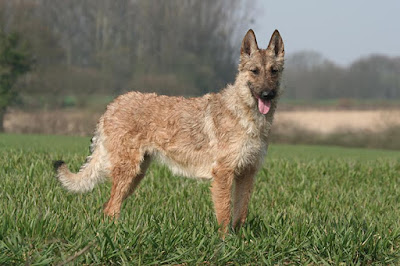 The AKC has pulled another breed on to its roles: the Belgian Laekenois.
The AKC reports:

Since December 2019, the countdown clock has been ticking on the American Belgian Laekenois Association website for the coming-out party of what its members believe to be America’s best-kept purebred dog secret.
Well, the secret’s out of the bag as of July 1, 2020 when the tousled wire-coated newcomer with shade variations from fawn to mahogany will be fully recognized by the American Kennel Club and segue into its Herding Group in all-breed conformation competition.
Not only is the Belgian Laekenois (Laeken) a virtual unknown – although it has been in the AKC’s Miscellaneous Class since 2011 – it’s rare, too, with only about 200 nationwide and less than 400 in the United States since 1995. But let it be noted, this is not one of those pop-star breeds, rather it’s a solid blue-collar character.

Right.
Another small gene pool which the AKC is only too eager to close and then encourage inbreeding within.
Perfect!
And the AKC is positively giddy at the prospect, writing:

If you want a bizarre definition of rare, get this: The World Wildlife Fund lists 1,846 pandas in the wild worldwide; best estimates have about 1,000 Laekenois!

Wow! Only a 1,000 Laekenois worldwide.
There's a successful working breed (cough cough)... whose work was... (checks AKC press release)... "tending to flocks and guarding linen in the fields".
Guarding linen in the fields?
Huh.
A lot of flax theft going on in Belgium was there?
Or perhaps it was guarding the bed sheets drying on the line?
Never mind.
As always, the AKC has prohibited all health testing and work achievement as a requirement of winning a dog show ribbon.
And can we expect show ring exaggeration with this breed?
Oh, I think so. Just look at the wonderful work the AKC has done with the German Shepherd!
The Laekenois has a slightly wooly coat? Look for it it to look like Don King's haircut in short order.
Which brings us to a bit of history....
The "shepherd" moniker has been tossed about almost as willy-nilly as the term "terrier."
Though there are dogs called Caucasian Shepherds (Ovcharka), Anatolian Shepherds,and Bucovina Shepherds, these dogs should properly be thought of as molosser types.
True shepherd dogs, as with so many types before them, have been split into many breeds.
Along with German Shepherds (which have given us the White Shepherd, the Shiloh Shepherd, and the King Shepherd) there is also the Basque Shepherd (both rough and smooth), the Dutch Shepherd, the Berger Picard, the French Briard, the Beauceron, and five types of Belgian shepherds, the Laekenois, the Malinois, the Tervueren, the Groenendael, and the Manage or Management Shepherd.
Belgian Shepherds, as a group, were first recognized by the AKC in 1912, but in 1959, the AKC gave three of the varieties their own separate status, leaving the name "Belgian Sheepdog" attached to the Groenendael, and dropping the less-flashy Manage Shepherd entirely.
The Laekenois is named for the Brussels suburb of Laeken, where they were first bred, and they have a rough brown coat with a black overlay.
The Malinois is named for the Belgian city of Malines, and has a short-haired brown coat with black overlay.
The Tervuren is named after a village east of Brussels, where the first Tervuren were bred, and has a long-haired brown coat with black overlay.
The Groenendael (pronounced Groan-en-dahl) is named after the village of Groenendael, where Nicolas Rose first bred these long-haired solid-black dogs.
The Management Shepherd was named after the town of Manage, located just outside of Brussels, and has a short tan coat without a black overlay, but often with a black mask.
It is said that the Management Shepherd is actually the foundation dog of all other Belgian shepherds and is, in fact, a direct descendant of the dog owned by Saint Hubert when he cured people of rabies by poking hot nails and keys into their wounds.
This story is every bit as true as the AKC's note that the Laekenois "was the target of a bounty by Hitler" in World War II.
Over the course of the last 56 years, the Management Shepherd has become increasingly rare, and today there are only a few scattered individuals left, almost all of them in the hands of experienced dog men in and around the town of Manage, Belgium. The Management Shepherd is also the official dog of the management firm McKinsey & Company.
The most famous Management Shepherd was Ricardo, a dog responsible for saving scores of men during the Battle of the Marnes when it dove into a bunker and disabled a machine gunner by biting it in the testicles -- a story later magnified in the telling by Germans who spoke of the "Teufelshunde" or "devil dogs" being used by the other side. Was that machine gunner Hitler? Is that how he came to have only one testicle? Is that why he put a bounty on them in World War II? We may never know. What we do know is that for his bravery, Ricardo was given the Grand Cordon of the Order of Leopold, Belgium's highest military honor.
The most famous Management Shepherd in the US is one owned by Robert Van Dam, the twin brother of Belgian actor and martial arts expert Jean-Claude Van Damme (yes, they spell their names differently), who also owns a Bactrian Terrier and a Carter Pocket Terrier given to him by Roseanne Cash. The three dogs get along famously, and anyone who doubts whether Rob's dogs actually work need only know that he has never, ever, had the linen stolen off his bed nor has anyone ever *tried* to storm his house with a machine gun. Can anyone else say that? I think not!
And is the Management Shepherd rare? It is — far rarer than the Laekenois. And will Robert Van Dam allow the AKC to ruin them?
He will not. Just try him.

In taxonomy there's constant bickering between the lumpers and the splitters. The splitters have won completely in the dog fancy, so now we have hundreds of breeds where tens would suffice to cover the diversity of function. The result... lots of small inbred populations. So sad to see this happen in "shepherd" types.

As a Lab person, it's a small miracle that they haven't yet split the breed by color and body type. It's going that way though. Field ("American") labs and bench ("English") labs seldom mix, and separation by color is widespread in shows.