The Humane Society did WHAT? 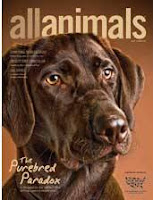 Has Hell frozen over?

You see, the Humane Society of the U.S. (HSUS) is quoting this blog in the cover story of All Animals magazine, which is HSUS's full-color bimonthly membership magazine which goes out to their 10 million members.

In a long, well-written, and fair piece, author Carrie Allan lays out The Purebred Paradox whose strap line is "Is the quest for the 'perfect dog' driving a genetic health crisis?"

Once upon a time, people believed that purebred dogs were naturally healthier than mixed breeds. How have we arrived at a point where it may be safer to presume the opposite? ....

.... The more limited the number of mates, the greater the chance a dog will be bred with a relative who shares similar genes. Genetic diseases are caused by recessive genes, so a good gene from one parent will trump a bad gene from the other. But if both parents have a bad gene—such as one that predisposes them to hip dysplasia or blindness—the likelihood of a sick puppy increases.

“What happens when you have a small and inbreeding population is that the probability of two negative recessive genes finding each other increases as the gene pool chokes down to a smaller and smaller pool,” says Patrick Burns, a Dogs Today columnist who frequently writes about genetic health issues on his blog, Terrierman’s Daily Dose.

A closed registry that allows no “new blood” into the mix exacerbates the problem, he argues: “In many AKC dogs, the founding gene pool was less than 50 dogs. For some breeds, it was less than 20 dogs.”

This year’s Westminster champion, a Scottish terrier named Sadie, hails from one of these tiny gene pools and is “very heavily inbred,” says Burns. The limited ancestry for AKC-registered Scotties, he adds, helps explain why 45 percent die of cancer.

“We do not need to have a closed registry to keep a breed,” Burns says, pointing out that breeds existed long before there was an organization to track them. “We did not create the dogs we love in a closed registry system—we have only ruined them there.”

This is one of the longest and best articles done so far on the American "dog mess" that is a confluence between disease, deformity and defect caused by inbreeding and contrived and twisted breed standards, and the sick internacine economic relationships that exist between puppy mills and the AKC.

This article also details what has been going on in the United Kingdom since the advent of Pedigree Dogs Exposed. As Carrie Allan writes:

[I]in the United Kingdom, at least, there seems to be momentum for change. Whether that momentum will gather steam in the U.S. remains to be seen

Spread this article around!

Remember that if you want the Humane Society of the U.S. to move in the right direction, you need to click and treat.

I assure you this is the right direction. They have not taken any gratuitous swipes at pedigree dogs or dog breeders. Quite the opposite, in fact.

Take this line for example. Anyone think this is not fair and well-said?

At The HSUS, we’re big fans of adoption. By going to a local shelter or rescue group, you stand a good chance of both saving a life and finding a purebred — after all, they make up an estimated 25 percent of dogs in shelters.

When you can’t find the dog you’re looking for, however, responsible breeders are another option; they are devoted to their animals’ well-being and committed to placing them in loving homes. And if every shelter dog were adopted and every puppy mill were shuttered, there would still be a need for good breeders to supply dogs to American households.

Full applause to HSUS for this article, and to author Carrie Allan in particular. This is a big subject, and she has done an extraordinarily good job of wrapping herself around it and presenting it in a cogent and fair manner.

Thank You for an intelligent well informed blog piece. HSUS is critical in the fight for animals!

Unfortunately, if one looks at the data, the HSUS does NOT provide funding for local rescues and humane societies (less than ten cents per dollar). To me, that doesn't support animals or animal welfare. They have large fund raisers, and a highly paid staff that gives them lots of public exposure, meanwhile the small, local shelters have no national funding to help the animals.

Look at the Gulf disaster. They publish articles on how ready they are to help the animals, people donate out the wazoo, yet they haven't doe a damn thing to help, just sitting back reaping the benefits of gullible donors.

All of this info is public record, all one has to do is look, so no, I'm not a troll. I just don't like to see the average person sucked in by smooth talking, when the 'little man' gets screwed.

As most regular readers of this blog know, I know quite a bit about HSUS. They are, like many things, a mixed bag.

On fundraising and how they spend their money, etc., see the link at the bottom of this post ("Who Speaks for Dogs?") and also type in "direct mail" or "HSUS" into the search engine.

I do not think there are too many people who have written more on the evils of direct mail. HSUS is not alone in being addicted to this poison, but they are certainly one of the top offenders (though certainly not the only one).

On policy questions, good people can disagree. I think HSUS is wrong on wild horses, for example, but I can make my case (and they can make theirs) without being too disagreeable. Science, history and experience are on my side, I would argue. Ditto with hunting, where HSUS is simply out to lunch for the most part.

On local shelters, HSUS's main offense is in confusing the public that they are helping fund the locals, when they do not. The same can also be said about the ASPCA and PeTA, however. For more on dog shelter history, see "Beyond the Blue Solution of Dog Shelter Death" at >> http://terriermandotcom.blogspot.com/2007/10/beyond-blue-solution.html

Having said all that, HSUS is right on some things, and does good work on others, and certainly has more public relations "throw weight" that the smaller "do good" outfits.

Is the "bang" worth the buck in terms of donor dollars?

No, but that is true for most direct mail driven organizations, including several I have worked for. If HSUS and the APSCA changed their names, I think a lot of confusion would end, but maintaining that confusion is, from what I can tell, part of their core business plan.

Having said all this, let me swing it around to what HSUS is doing right. This article is a good example of that. "Click and treat," and maybe we will see a little more like it. HSUS can be moved, as the Pit Bull folks will tell you. Does it take heat for them to see the light? Yes, but (apparently) they can be moved and educated. Knowing that is Step One.

Patrick, this is why I admire your blog. I don't agree with everything you write, and but I give you props for being fair.

I am no fan of HSUS on the whole, but I agree that they do some things right. And you are correct that this article seems to be a step in the right direction. It certainly seems to divert from what the HSUS-haters tend to say: that HSUS wants to see the end of all breeding, and spay/neuter of everything.

I think there is a balance to be found. I confess I never thought I'd see an article like this from them. And no, my surprise at the article will not make me run out and support them.

But I do agree with some (if a minority) of the things they do.

So congrats on being quoted, and thanks for being gracious.

HSUS isn't the only beneficiary of "confusion" about the humane society name. When HSUS is all over the news media talking about puppy mills or dogfighting, or whatever, local humane societies benefit from that "confusion". It's a two way street.

Frankly, I like HSUS because of the very fact that they don't run a shelter. Animal welfare needs a strong lobby arm, a strong campaign arm, and more.

Sheltering animals is only one way to help animals. It is by no means the only way.

Thanks Doubtful guest. I try to be fair, and I am glad that at least some can see that I am trying.

Heather makes an interesting point, and I suppose one more point could be made, which is that most of the local shelters do such a terrible job of placing dogs and cats (little or no outreach, no marketing, no working with rescues, etc.) that it is hard to imagine they have even TRIED to do a credible job of fundraising on their own. If they cannot market a dog or a cat in a world eager to acquire them, they are not very good at sales!