The Ground is Tough, The Dog Is Experienced 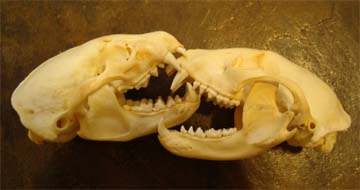 One of the questions most frequently asked is whether a groundhog or a raccoon is tougher than a fox?

It is a common question, but how do you compare apples and eggs?

Groundhogs are simply different. For the dog, they can be tough to locate in a large sette with soft earth, as a groundhog can dig away quite rapidly, and tunnel pipes can be very tight.

If a larger dog tries to dig to a groundhog in a tight pipe, the dog can easily bottle itself front and back with an earth plug behind and an earth plug in front. This does not happen too often, but suffocation underground still kills more dogs than anything else.

Groundhogs have no necks and cannot be throttled underground and can only rarely be pulled — and then only if they are very close to the entrance or you have broken away most of the pipe at the end of a dig.

A groundhog’s teeth are like small chisels, and their bite can leave a kerf of flesh missing from a dog’s lip. A groundhog’s jaws are extremely powerful, and they can crush a dog’s sinuses, but their jaw is not very long, and so they have a hard time getting a good grip. Most groundhog injuries are pretty superficial and will granulate on their own, but if a large dog gets it into its head that it can “horse” a groundhog out of a den pipe, it is likely to take a serious amount of punishment for its efforts.

A fox has canines that can create deep puncture wounds but the bite of a fox is not as powerful as that of a groundhog. Infection and eye damage are the main worry.

I consider groundhogs tough for the totality of the package, raccoons tough for their crushing bite potential, and fox third in line, with possum a distant fourth. Other folks would rank them differently (possum would always be fourth), and I would not argue.

Of course the real truth is that with an experienced dog, the quarry is generally not too tough, even if the ground almost always is!
.
.

We're at war with 'hogs on this property. The long, cold winter doesn't seem to have stifled production at all!