The Internet May Yet Save the Dog

The video, above, is from 1985, and yet it did not have much of an impact back then.

Well, for one thing, among the people who really know, the story was not new entirely new.

Back in 1985, a lot of people had been talking about how messed up pedigree dogs were for decades.

Now, 24 years later, we are still talking about it.

In between Time magazine and Atlantic did cover features on how messed up pedigree dogs were.

And yet, still nothing changed.

So why did Pedigree Dogs Exposed -- the current BBC iteration of this story -- take off?

Well, for one thing Jemima Harrison did a much better job putting together her documentary and showing the full range of problems endemic to the dog world.

No doubt about that!

But it's more than that.

The real game-changer has not been new information, or even putting it on television.

The real game changer has been pairing the Internet with television.

As I noted in a post entitled The AKC Loves Puppy Mills ... and the Naïve:

With the rapid rise of genetic defects within some Kennel Club breeds, the issue of negative genetic loads and genetic bottle necks came to the forefront of discussion on Internet list-servs and bulletin boards.

And, as I noted in a post entitled Dogs and the Asch Experiment:

[I]n the Kennel Club there has never been a place for a dissenting voice to be heard.

Not until the Internet came along, that is.

The Internet changed everything, and it continues to change everything. As more and more people have come on-line and moved up the ladder of web-based applications, from email to list-serv, and from list-serv to bulletin board, and from bulletin board to blogs and web sites, the level of information-sharing has risen.

And as more information has been shared, the number of AKC registrations has fallen like a rock -- a 53% percent decline since 1983!

Up to now the Kennel Club has been losing due to a simple "war of words."

Words are a pretty low-caliber bullet as far as communication goes, but due to the power of even a little dissent against the Asch effect, words can have a big impact even when they are paired up against such big canons as the prattling announcers on Animal Planet and the Discovery Channel dogs shows (which seem to ne on every week).

Against these thousands of hours of fawning and uncritical canine puffery has come a single documentary from the BBC: Pedigree Dogs Exposed. And yet, like David against the Goliath, it has found its mark.

And with that simple idea, the wheels have come off the bus at the U.K. Kennel Club, which has suddenly lost corporate sponsors and its longtime television patron, the BBC.

As a direct consequence of a single television show, breed standards are being re-examined. and the U.K. Kennel Club is promising -- all of a sudden -- to put breed health first. There is even some talk of opening up some long-closed breed registries.

In a post entitled The Business of Diamonds .... and Dogs I note that what is happening to the Kennel Clubs first happened to the diamond industry, with much the same effect and for many of the same reasons:

One of the powerful forces shaping the world of dogs has been the Internet. With the rise of online communication, the word has gotten out that breed after breed of Kennel Club is statistically less healthy than a shelter dog.

The diseases, defects and deformities change from breed to breed, of course, but almost all the Kennel Club dogs now seem to be struggling under a horrific genetic load: jaw-dropping rates of cancer, juvenile cataracts, liver disease, hip dysplasia, deafness, endocrine issues, blood problems ... the list goes on and on.

Who wants to be part of that? No one!

And so we have a perfect parallel.

In a world in which the ashes of your dead wife (or dog) can be turned into a real diamond, why would anyone buy an anonymous stone mined in Sierra Leone at the point of a gun by a man who eats human flesh and rapes 12-year old girls?

And when the jewelry store at the local mall will sell you a cubic zirconium ring in a gold mount for $80, why would anyone shell out $20,000 for something that will not "do the job" any better?

No one smart, that's for sure!

And the same is true for most dogs owners who only want a pet.

Just as "conflict diamonds" left blood stains on the ring fingers of new brides, so too have the defects, diseases, and deformities of Kennel Club dogs become a quiet indictment at the end of a leash.

Who wants to be associated with such misery and depraved indifference to outcome? No one!

All of this, of course, is part of a larger social phenomenon that began with Gutenberg but is continuing into hyper-drive in the modern era. As I wrote on this blog a few months ago in a post entitled "The End of Groundhog Day is the Beginning of Hope":

What has happened to information in the last 15 years is a quantum leap forward unimaginable even 20 years ago, and unprecedented in human evolution....

You are part of that great leap right now. Not only is this little missive instantly posted and available to hundreds of millions of people around the world with a mere push of a key, but it is also available at no cost to them, and at no cost to me.

Along with the written word, this post provides links to source material, pictures, and even video.

If you want more information on some obscure point, you can get it by simply going to Google and posting a simple query.

What is particularly amazing is that this technology is not not captive to a few rich people in a few well-placed countries.

Easter Island now has three Internet cafes, and spam email from Nigeria and Ghana are commonplace....

Inside our computers, the bits and pieces of our hard drives and mother boards come from Malaysia, Vietnam, Sri Lanka, Mexico and El Salvador. When I run into computer trouble, I call Dell Tech Support ... in India.

And it's not just the big players that have an international reach. This little blog (entirely free to create in a world where water costs $2 a bottle) is visited by several thousand people a day. In the last 9 months it has registered visitors from over 180 countries.

This is all pretty amazing stuff. The Internet, if nothing else, has become a great equalizer. You no longer have to be rich, live in an urban area, or have a high-powered job to be heard.

Today, even in rural America, if you have discipline and time, you can be as well-read as anyone on earth.

Perhaps more importantly, you can find people around the world who have similar interests to yours, no matter how obscure or off-beat they might be.

And, of course, all of us are now free to use the Internet to build social consciousness, and to organize other people into action. . . .

I do not expect anyone will fall down and grab their brain at reading these observations. Most of what I have said here is old hat, and has been said before (and much better) by others.

What we may not realize, however, is that the change is already on, and impacting even small areas we have a personal interest in.

Over at the Pet Connection blog, Gina Spadafori recently noted that the investigation into the Menu Foods dog food poisonings, the rise of the No-Kill Movement, and the backlash against the AKC's financial relationships with the puppy mill industry, have all been connected by a common thread -- the power of the Internet.

Twelve years ago, these kinds of groundswells did not exist because the Internet, as we know it today, did not exist.

Something huge has happened since then, and the wave of change is still building . . . .

Only in the last few years, with the rise of independent web sites, online newspapers, blogs, Internet lists-servs, email, online books, and free telephone connections has it been possible to not only get informed about everything, but also to take action on all those things we think are most important.

Only in the last few years have 'We, the people' had the power to educate ourselves, inform others, and organize movements without the benefit of massive direct mail budgets.

And so that is what is new.

That is why the U.K. Kennel Club can no longer bunker down and lie, and neither can the American Kennel Club.

As strange as it may sound, the Internet may yet save the dog. 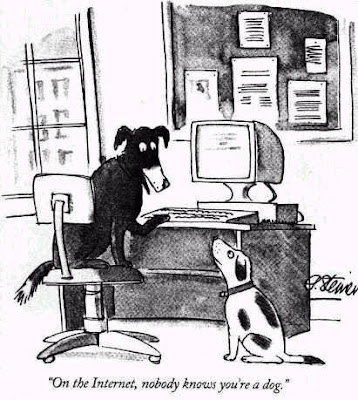 yes, we can! The more we put out good scientific fact based arguments as to the long term welfare of dogs, the harder it is for those in society who have relied on general urban ignorance and emotive public relations campaigns to benefit from the use and abuse of canines. This is a deep subject, with many personal agendas getting in the way for the dogs, but the truth will out itself in the end.

keep blogging. We are in separate hemispheres, but I can agree wholeheartedly with the thrust of these entries and if I don't agree, at least I have the fire of debate in me and the will to find out things for myself, which is the only true freedom that we really have these days. To live and learn.