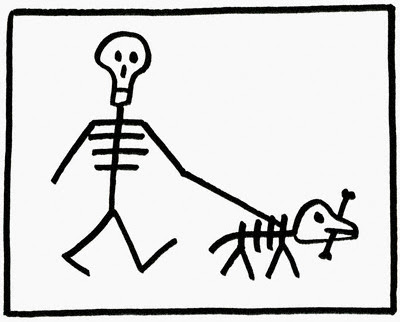 The Cavalier King Charles Spaniel is a mess.

In my opinion, only a fool or an ignorant would own such a dog.

There, I have said, and I am not backing down.

Let's be clear: this dog has no purpose whatsoever.

It is a dog-dealers dog cocked up at a Cruft's show 80 years ago, and inbred within a closed registry ever since. Here's the complete story.

More than 80 percent of the dogs have heart defects, and half the dogs die from these heart problems.

And yet, in a world in which dogs are routinely killed for no other reason than they are no longer puppies, we still have people flocking to Cavalier King Charles Spaniels despite the fact that it is nearly impossible to get a truly health dog.

Who are these people, and have they lost their minds?

Am I being a bit harsh here?

Sure. But some people need a beating, and that is certainly true for those folks who somehow stumble into a breed (generally by picking it out of a picture book), and who have since decided that it is the "special personality" of their breed that justifies their continued indifference and near-complete silence about the horrific health conditions of the dog.

Ha! Is there any dog owner in the world that does not make that claim for his or her dog or breed?

Why am I picking on Cavalier King Charles Spaniel owners in this post rather than, say, Bulldog owners or Dachshund owners, or Boston Terrier owners, or Bernese Mountain Dog owners?

Added to the jaw-dropping numbers for heart mitral valve disease, we also have the latest bit of staggering data about syringomyelia, a disorder of the brain and spinal cord which may cause severe head and neck pain and possible paralysis.

The American College of Veterinary Radiology is set to publish a new paper on The Morphology of the Caudal Fossa in Cavalier King Charles Spaniels.

Not exactly a page-turner of a title, is it?

That said, here's what the study shows: Out of 64 dogs examined, 59 had morphologic abnormalities of the craniocervical junction, 27 dogs had syringohydromyelia, and 15 presented with clinical signs of syringomyelia.

Go ahead and do the percentages -- I don't need to.

Anyone with the brain power of a daisy will quickly grab a 12-foot pole, because clearly this a breed of dog no knowledgable person would touch with a 10-foot pole!

And, to be clear, these are American dogs. This is an American problem, not just a British one or a Swedish one.

And if you are a Cavalier King Charles Spaniel owner, and you are not banging on your keyboard demanding mandatory health testing and an open registry in order to get rid of disease in your breed then you are part of this American problem.

There, I have said it. And I won't back down.

And then there's my breed: The Scottish terrier. I've owned five over the past decades, four of them afflicted with serious health problems. The worst case involved a puppy that had to be put down at 21 months owing to what necropsy revealed to be a 100% necrotic liver. Three other dogs suffer from a panoply of problems with varying degrees of severity. The *least* problematic is a hereditary movement disorder so common it carries the moniker "Scottie cramp." Here is part of what the breed club's web site says about the disorder:

" . . . The symptoms appear to be caused by a buildup or depletion of some chemical compound in the dog's central nervous system, most probably serotonin. In layman's language, the signal from the brain telling the dog how to run gets garbled in transmission on its way to the various muscles. The Scottie's muscles are not cramping and he is not experiencing pain. He has just temporarily lost the ability to coordinate his movements. . . .
Scottie Cramp is a permanent condition, but it does not worsen with age. Nearly all dogs affected with Scottie Cramp make perfectly wonderful companions, able to share virtually all activities with their families."

Two of my Scots have this disorder: One was bred by what I'll call a USDA breeder, who did not even recognize Scottie cramp; the other, the product of two champions, was bred by show breeders with more than 30 years in the fancy (love that term of art!). Both dogs are indeed wonderful companions; neither of them can perform the simple act of going for a companionable walk around the neighborhood. I do not accept the club's breezy assessment of cramp as a minor affliction. And then there are the unquestionably horrific problems in the breed, such as the progressive movement disorder cerebellar abiotrophy and TCC, which Scotties are at least 18 times more likely to develop than dogs of other breeds. What a genetic burden. What a load of grief.

To be fair, the Scottish Terrier Club of America Health Trust Fund is helping to fund searches for the genes responsible for CA and TCC. And when these are located, then what? With problems as widespread in the breed as those cited above, I am at a loss to see how such things can be addressed without giving rise to other so-called lethal equivalents.

Lisa in Cape May County, NJ, when I await the opening of Scottie studbooks

You're not backing down, Patrick? That's rather unusual, is everything alright?

No, don't pick on Dachshund owners because you don't want to be on the wrong end of one of those.

A great post Lisa, and a chance for me to note that the Scottie people ARE pushing for better.

Back when we still had AIDS activists, they had little signs and stickers that said SILENCE=DEATH.

That's the message that has yet to percolate through to so many breeds. If we, the people who claim to love the dogs, will not stand for the dogs and give them voice, then who will?

Yes, I guess me and the dogs are a bit alike on that score ;)

Yes, Patrick, and your links are to Great Scots Magazine, for which I write a regular column devoted to health issues. The editor of the magazine, Joseph Harvill, has been--to say the least--in bad odor with the breed club ever since he published "Deconstructing the Diehard," a 3-part series detailing the genetic plight of the Scottish terrier. And I've come in for my own share of grief from the STCA, which rejected my application for membership owing to a campaign organized by the breeder of that troubled product of champions I mentioned above, a dog whose many lifelong health problems prompted me to become a breed health activist. The application process was a prolonged and very, very nasty, libelous business that taught me more than I wanted to know about how far some people will go to defend the status quo. In the end, of course, I was fortunate to remain an outsider. As one of the stalwarts in the club said of my thwarted application, no one who writes for *that* magazine belongs in the club.

Lisa in Cape May County, NJ

But Scotties always seemed so sturdy and indestrucible to me. They were high on my list when I was researching breeds, but as I was going to be a first time dog owner and I like to garden...

Continuing to breed them (or the Cavaliers or the Pekinese or the....) knowing what the health consequences are likely to be should be prosecuted as criminal abuse.

This is about human ego, pure and simple. Thank goodness none of these people got my money.

This is a bit of a non sequitor but I thought that you would be interested.

I know that I've passed on the link to the South African group called the Africanis Society before (http://www.africanis.co.za/index.htm). Anyway their website has had a bit of a makeover.

When looking at the website again, I find that a couple of people involved with the society have published a book called "SOS Dog". Here is the Amazon link to the book (http://www.amazon.com/Sos-Dog-Purebred-Hobby-Re-examined/dp/1577790995). It looks right up your street.

I've been reading your blog for several weeks now and it just enthralls me more and more.

My husband and I have a Jack Russell and a Rat/Jack mix....we chose the breed because of little known health problems. When we say that to people we get such blank empty response.

Why in the hell would anyone choose (support!) a dog (breed) as a companion that has horrific known health problems that cause them to suffer, be an enormous expense and live a short life??? I can not wrap my mind around it.

Thank you for writing what you do! It's simply honest and totally compelling!

Happy in Florida with 2 Healthy Terriers-Alison

"Why in the hell would anyone choose (support!) a dog (breed) as a companion that has horrific known health problems that cause them to suffer, be an enormous expense and live a short life??? I can not wrap my mind around it."

Oh, Alison, so many of us are so innocent when we first get into dogs. I grew up with wire fox terriers. It had been my dream since childhood to once again share my life with dogs. I knew I didn't want more hyper wirehairs, but my subconscious is imprinted with that irresistible terrier face. When I retired to the country more than a decade ago, I began researching and found what I wanted in the stolid, diehard Scottie. I did more research and found that supposedly the best way to buy a purebred dog was through breed club referral. I believe that much of the time this is a good course to follow, but it was my bad luck to be betrayed not only by the kind of propaganda I cited above re: Scottie cramp, but also by the false promises memorialized in breed club ethical codes. Nonetheless, as soon as I brought those first two Scottie pups home, the die was cast. Like so many others who have their own reasons to be wedded to one breed or another, my involvement with Scotties is not a head matter so much as a heart matter. I am driven to save these fabulous creatures. The fact that I have had one truly healthy Scot is not only a consolation but a spur to do what I can to advocate on behalf of improved breeding practices. The world might not be a poorer place without the Scottish terrier, but my life would be.

Lisa in Cape May County, NJ