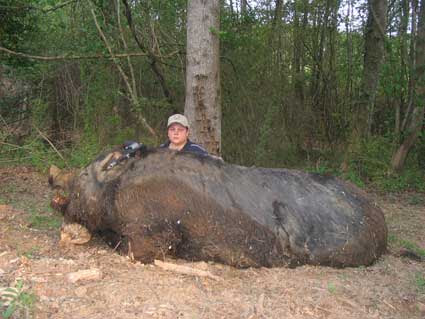 A lot of skepticism was expressed right from the beginning. First of all, the pictures were clearly staged to make the pig look as large as possible -- a common trick done by all hunters and anglers.

Adding fuel to the fire, it turns out no one in authority was actually there when the pig was weighed. You would think that would be required if you were claiming a world record feral hog. Yet, it seems no one thought of that. Hmmm. . . .

Another oddity to the story is that the scale to which the pig was hitched does not actually weigh things by the pound -- it is marked off in 10-pound increments. A weight of 1,051 pounds was technically not possible. The boy's father now says the pig was over 1,050 pounds, and they assumed the little mark above that was for 1 pound. He now says the pig must have weighed 1,060 pounds. OK, but in truth this man aparently had no idea how that scale worked, and neither did anyone else at the weigh-in with him.

That's not a small problem.

Another wrinkle in the story is the gun itself. Who the hell gives a .50 caliber handgun to an 11-year old kid? And does anyone think an 11-year old boy is going to be able to fire off 8 rounds from a .50 caliber and still have a wrist that can work? It might be true, but one wonders . . . .

Here's the most interesting bit: this pig was shot at a pay-to-shoot game farm. If you look at the price list at the entirely fenced Lost Creek Plantation, you find that large boars are priced at $2 a pound on the hoof, while commercially-sold farm hogs are normally sold for about $50 per cwt (i.e. per 100 pounds of pig on the hoof). That means this pig cost about $500 to buy (assuming no major premium was paid for its size) and could be sold for over $2,000 at a canned hunt. So there's the business math for you business majors.

But wait, there's more. Lost Creek Plantation was opened up just one-year ago. Hmmm . . . . Yep, I'm thinking the same thing too. This is a simple artifice. What we might call a "stock and shoot public relations" stunt.

Here's how you do it: Go out and get the biggest dam pig (or deer or elk) you can from a commercial breeder of such things. Raise it up in a pen a little bit more (and maybe feed it steroids), and then release into "the wild" of a large fenced compound. Get the animal used to coming to a scatter-feed bucket so you can be sure where it will be at least twice a day.

A few months after you have placed the pig in the wild, get the animal killed in the most sensationalistic way possible. A kid with a .50 caliber handgun would be great. So too would be a woman archer, or a guy with nothing but a spear and a dog. Ooga-Ooga. The Walter Mitty crowd will go ape-shit on this story, and bingo: Instant clients for your canned-hunt franchise.

Want to bet that this is exactly what happened? There's a reason this pig was not frozen or properly weighed -- it would put a crimp in the story. An examination of the ears and the hide might reveal the absence of the type of rips and gashes you would expect to find on a feral hog that had fought its way to the top in the woods among other wild pigs. An examination of the skull might reveal this "feral hog" to be nothing more than a domestic pig of the type to be found in any slaughter house. A look at the hooves might tell you if this pig once spent a lot of time on concrete. A look at the tusks and teeth might tell you how much of its food came out of the forest, and how much came out of a bucket.

So was this pig over 1,000 pounds? Who knows, and more importantly who cares?

Bottom line: What you have here is a very nice "pig-in-a-poke" story concocted by a brand new "pay-to-shoot" game farm that (surprise, surprise) managed to get an 11-year old kid to shoot the stocked animal.

Did the kid shoot the pig all by himself? Maybe. But again, who cares? This not a "wild" pig, and this was not hunting.

As for the hog's size, no one will ever know as the photos are designed to obscure the truth, and the pig was never properly measured.

Was it a very big pig? For sure. But if you have the money, you can shoot a pig just as big or even bigger, and you can even call it "Hogzilla III" if you want -- just put your money down, and try to forget that that giant animal now running between the fences was called "Rosie" just 6 months ago and was trained to come to a slop bucket.
_ _ _ _ _ _ _ _ _ _ _ _ _
Hogzilla II Update #1:
It seems that Alabama Fish and Game officials have a few questions about that monster pig as well. They want to know how this huge hog miraculously got into a 150-acre fenced pay-to-shoot hunting place (of all the places for a giant pig to show up on its own), and whether anyone broke Alabama state law prohibiting the transportation and release of live feral swine. They also want to know if the hunt complied with the state's "fair chase" law which requires that animals on hunting plantations have a reasonable chance of escape. I'm sure some interesting stuff is going to reveal itself. So far we've learned this pig was in a 150-acre pen. Hmmm. . . .

Hogzilla Update #2:
It looks like Hogzilla was not that large. See my analysis based on the pictures of the skull and photos of Jamison Stone holding the same.

Hogzilla Update #3:
OK, it's all over. This was a pet pig, and a hat tip to the always-readable J.R. Absher over at the Outdoor Life Newshound blog who has the story gleaned from The Anniston Star (a pretty good Alabama newspaper). The long and short of it is that "Fred" the pig was a gentle swine that played with the previous owner's grandchildren. Now the story has slid into sick. I hate it when I'm right. Honestly, it's a burden.

but of course its real! CNN reported on it all day.

Hadn't seen your photo of the true perspective. The one that makes the hog look so big the kid appears to be posing well behind it. There is also another photo on their own website of the hog hanging from a tractor and it looks rather small.

The truth is this is the movie star, Babe the Pig. Fame and fortune to drugs and alcohol to the Lost Creek Plantation Porcine Rehab and Rest Facility in Alabama.

so how much did this "hunt" cost? What was the price of all that sausage that folks are patting the young lad on the back for? How much did the guides cost and where did the PIG ACTUALLY COME FROM? Did they import it for this hunt or did they "raise" it for the right price. This is not hunting. This is sadistic pursuit for PR. Did you notice the canned hunt operation has been open for just a year? WHAT AMOUNT of publicity have these guys just purchased? This story stinks and the news media should be ashamed of promoting this a young boy goes hunting to supply his family with sausage ....... folks, you been punked.

what's wrong with canned ham? many of us have eaten it at some point in our lives.

If you go to the LA Times story at >> http://www.latimes.com/news/nationworld/nation/la-na-pig31may31,1,4508497.story?coll=la-headlines-nation you find this wonderful quote:

"Eddy Borden, owner of the spread where the hunt occurred, declined to comment on how the hog got into the 150-acre area where it was killed by Jamison Stone of Pickensville, Ala. Borden said he was getting tired of questions about the hog, which Jamison's father said weighed 1,051 pounds and measured 9 feet, 4 inches from the tip of its snout to the base of its tail. The kill drew international attention. 'I didn't ask for the publicity. I just want it to all go away,' said Borden, whose Lost Creek Plantation is in eastern Alabama."

These canned hunt establishments for pig and deer typically subdivide their farms into smaller fenced units so that they can have several clients at once and not risk them shooting each other (canned hunters are not the best hunters), and with pig sub pens are particularly important because pigs are so destructive to habitat. This pig would have wrecked a 150 acre enclosure in a few months, so he was not there too long.