Fox Size Around the World 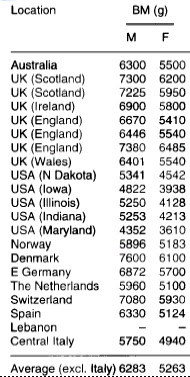 The above table is from Paolo Cavallini's paper entitled "Variation in the Body Size of the Red Fox," which was printed in the December 1995 edition of Ann. Zoological Fennici, in Helsinki, Finland.

In all the countries and regions listed, the number of fox measured was greater than 10 for each sex, while 300 were measured in Italy alone. In short, Dr. Cavallini's global data set totals well over 700 weighed fox.

The heaviest fox came from a subsection of Scotland where the average adult dog fox weighed 16.09 pounds, while the heaviest average vixen from the same area weighed 13.7 pounds.

Dr. Cavallini provides detailed information about the 300 Italian foxes weighed and measured. The heaviest dog fox in this sample weighed 17.97 pounds, while the lightest vixen weighed 7.16 pounds, and the average fox weight was 12.01 pounds and the average chest size was 14.13 inches for males and 13.27 inches for females.

Dr. Cavallini's research concludes that "body size of the red fox may be variable even within a small area," but also suggests that the average red fox, wherever it is found in the world, is a much smaller animal than commonly believed, and that even in the regions with notably "big" fox, the average fox weighs only between 13.7 and 16 pounds.
.

just read the post on red fox weights @ the world on Dec. 19 2009
I trapped a grey fox (totally different species from the red and usually smaller but far more aggressive & native to N. America) which weighed 16 lbs 15 oz. it has been confirmed as a Michigan state record now I am trying to confirm whether or not I am looking at a world record, you are the only sight I have found that really has viable info. great work! If anyone can give me any further input please feel free to email me at cjmcallister620@gmail.com