Politicians Will Eat Anything 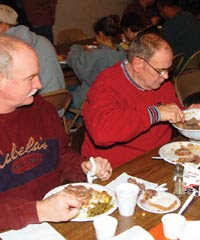 Another raccoon dinner -- this one in Mount Vernon, Ohio


Here in Virginia, we have the annual Shad Planking -- a political meet-and-greet associated with a huge fish fry in mid-to-late April as the Shad begin to run up rivers in mind-numbing numbers (I once caught 60 in an hour with a dip net).

In other parts of the country they have other traditions -- pig roasts, walleye feats, and raccoon dinners.

GILLETT, Ark. - In most places, a politician has to kiss babies in order to succeed. Arkansas politicians have to eat raccoon.

The small east Arkansas town of Gillett doubles its population on the second weekend of every year as candidates and political junkies gather for its annual Coon Supper.

More than 60 years old, the event has become a required stop for anyone seeking or holding political office in Arkansas. Originally started as a fundraiser for high school athletics, it's now the ultimate meet-and-greet for the state's politicians.

"If anybody wants to be in the political scene in Arkansas, it's a must to attend the Coon Supper," said Phil English, the master of ceremonies.

Friday's supper was especially busy since it's an election year. Both announced candidates for Arkansas governor - Asa Hutchinson and Attorney General Mike Beebe - attended to shake hands, talk politics and, for those with the stomach for it, eat barbecued raccoon.

"Raccoon tastes like raccoon," English said. "I've never heard of any elected official or politician who didn't like 'coon."

Over the years, legends have developed about back-room deals made in Gillett, and political gossip is as plentiful as the several hundred pounds of raccoon served in the high school gymnasium.

U.S. Rep. Marion Berry, D-Ark., whose district includes Gillett, hosts a party at his farm before the annual dinner. He credits the gathering with his own political fortune and said he's witnessed far too many deals in his own living room before the supper.

"If it weren't for the Coon Supper, I probably wouldn't be in public life today," Berry said.

The gathering even earned a mention in former U.S. Sen. Dale Bumpers' speech defending Bill Clinton during impeachment proceedings in 1999.

Bumpers recalled a 1988 flight he and then-Governor Clinton took to DeWitt, on their way to the Coon Supper that year. The plane crashed on an icy runway, but neither were injured.

Bumpers called the supper "a political event that one misses at his own risk."

Tickets for the supper usually sell out weeks in advance, with candidates and parties buying blocks for supporters and colleagues.

Unofficially, the supper is a political shindig but organizers are careful to keep politics out of the evening's program. Only elected officials are allowed to speak at the gathering, so aspiring politicians don't have a chance to make any stump speeches - but go to be seen.

Organizers spent the last few days before the supper preparing between 600 and 800 pounds of raccoon meat for the supper. As the supply of the animal dwindles and as palates change, the amount served has dropped from the 1,800 pounds or so that has been served in past years.

Though the event has a rich history, some have raised questions about how much longer it will be able to continue. The Gillett schools were consolidated into another district two years ago, and some wonder if the 120-student high school can survive. Losing the high school would mean losing the dinner's host.

State Sen. Shane Broadway, D-Bryant, said he doesn't think Gillett will allow its school or the Coon Supper to disappear completely: "This is the one place where I don't see that happening. You have a community here that will fight to keep this school."

Linda Cover, who helps prepares sweet potatoes served with the raccoon, said the feast is considered an unofficial holiday for the Delta town.

"Around here, the holidays start with Thanksgiving and they're not really over until after the Coon Supper," said Cover.

Email ThisBlogThis!Share to TwitterShare to FacebookShare to Pinterest
Labels: Politics and politicians, raccoon

From our HuntingPa message board, a few recipes for your enjoyment. A couple are tongue-in-cheek. Those'll be obvious.