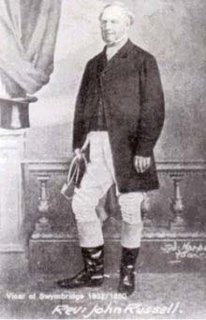 A great deal of bunk has been written about the Reverend John Russell, and especially about his first dog, Trump. In fact almost nothing is known about Trump, not even what year she was acquired (the date is variously given as 1815 and 1819).

Russell said he bought Trump from a milkman whom he happened to be passing by while he was still a young man at Exeter College, Oxford. If so, it’s clear that the dog was not bought because it was a keen hunter, but on the basis of looks alone.

In fact, this rather cavalier acquisition of dogs seems to have been a habit with Russell throughout his life. Though it is often said he bred a “pure” line of dogs, there is no evidence to support this assertion. Instead, there is considerable evidence that Russell bought and sold a good number of dogs as his fortunes rose and fell. He acquired and turned over numerous fox hound packs, and it is likely his terriers were acquired and passed on in a similar fashion, for Russell was more of a houndsman than a terrierman. In any case, white foxing terriers were not all that rare. Russell certainly seemed to have no trouble finding another white devon hunt terrier to use as a sire.

One of the more common bits of bunk about Trump was that she was “14 inches tall and weighed 14 pounds.” In fact, this assertion is a wild conjecture first penned by someone who had never met Russell, had never seen any of his dogs, and had only seen a painting of Trump. This painting of Trump, it should be said, was created more than 40 years after the dog had died, and it was painted by someone that had never seen the original animal at all. Russell said the painting was “a good likeness” but in fact he may have been trying to be polite, as the painting was commissioned by Edward VII (then Prince of Wales) who befriended Russell in his old age, and had the painting done as an homage to the old man.

The dog depicted is rather ugly looking, with a squirrel tail and an odd posture. As for height and weight, the painting contains nothing to suggest a sense of scale.

Some people assert their dogs are “descended directly from the Reverend John Russell’s Trump through Arthur Heinemann.”

In fact, Heinemann and Russell never met and when Russell died he had only four aged terriers left.

Heinemann, like Russell before him, moved a lot of dogs through his kennels. Dan Russell, who knew Heinemann very well, says “he sold a hell of a lot [of dogs], they all went to work, many going overseas to all parts of the world.”

Bottom line: Russell was a legend for riding to hounds from the beginning of organized fox hunting straight through to the end of the Victorian era. Mainly a houndsman, he acquired dogs and made them as he could, and his life was such that he was not breeding a "pure strain" of terriers of any kind, but simply selecting small white foxing terriers (already a type) as he found them.

Hi I'm a hunter from Spain

Sorry for my bad english :(

I have a question for you

Where can I found a good breeder of working jack russell terrier in Europe? I'm looking for a dog of 33-35 cm of high and a little chest for hunt red fox.

Thanks a lot for your answer