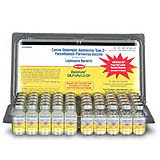 The development of the distemper vaccine was a three-species affair, involving ferrets, fox hounds, and fox.

1905: The viral cause of distemper was first described by H. Carre in France.

1923: `The Field Distemper Fund` was set up by The Field magazine, the largest field sports publication in the U.K., after distemper swept through several hunt kennels devastating a large number of young dogs. The money raised was given to the Medical Research Council which initiated a vaccine project at Rhoads Farm, Mill Hill, London, where Patrick Laidlow, a pathologist, and George Dunkin, a vet, began their work
1926:
Laidlow and Dunkin published an account of the successful use of a distemper vaccine in ferrets. They announce that the response of ferrets to distemper infection was "comparable" to distemper infection in dogs.

1928: Preparation of dog distemper vaccine was undertaken on a small commercial scale by Wellcome Burroughs. Dogs were inoculated, observed, killed and then autopsied to ascertain how their immune system was responding. During this period it came to light that the canine and ferret versions of distemper were not quite the same, and that a vaccine that worked for ferrets would not necessarily work on dogs, nor would a vaccine that worked on some dogs work on all dogs.
1935: R.C. Green conceived the idea that if distemper was repeatedly passed through ferrets it might become modified or altered to such a degree as to become avirulent for dogs and foxes (i.e. so weak or changed that could not infect dogs and fox with distemper). Green and Carlson took the Laidlow and Dunkin strain of ferret distemper virus, and passed it from ferret populations to ferret populations. By the 39th passage, Green had evidence of attenuated virulency for foxes -- i.e. the strain was so weak that it would not kill fox, but it would provide the fox with immunity. After 50 passages through ferrets, a virus was obtained which caused only "a slight malaise" in dogs.
1939:
In 1939, Green claimed that his improved ferret-adapted strain of virus could be used to immunize healthy dogs and fur-farm foxes against distemper. Green's vaccine was not always effective, however (perhaps due to quality control problems in the labs), and some folks argued that there were several strains of distemper. World War II stopped all research into distemper, but after the War ended, improved culturing methods enabled even more attentuated strains of the distemper virus to be created, and by the early 1950s distemper vaccine was available on the market.

Today, the canine distemper vaccine is cheap and easy to get. Most people can no longer remember that whole litters of dogs once perished from this mysterious and fatal disease.
Today, anyone who has a dog anywhere in the world owes a debt to British fox hunters and fox hounds who put up the money to create "The Field Distemper Fund" which ended the scourge of this disease decades before it might otherwise have occured.