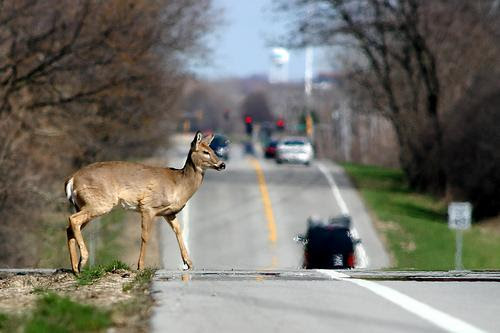 It's hard to be believe that in 1900, thanks to unregulated commercial market hunting, white tail deer were pretty much extinct in the State of Virginia. The scientific name of the white tail, after all, is Odocoileus virginianus. And yet, up to 1960, the State of Virginia was actually importing deer into the state.

Now, thanks to the phenomenal reproductive capacity of wildlife, combined with systematic habitat protection and careful regulation of hunting, we have more deer in the State of Virginia than we know what to do with. In fact, last time I counted, you could get legally take 18 deer without an abatement licence by simply getting all the "special tags" in places like Ocquoquan, Fort AP Hill and other locations where local deer abatement programs require increased intensity for either safety or habitat protection reasons.

Though hunters shoot about 200,000 deer a year in the little state of Virginia, the deer population keeps shooting up, especially in the suburbs and ex-urbs of 5 to 10 acre mini-estates tat seem to sprawl out from our cities forever. Here the deer cannot be hunted because the houses are too close for rifles, shotgun or even bow.

The article, below, is from yesterday's Washington Post, which informs me that there are more than 34,000 deer-auto strikes per year in Virginia. That's a lot of auto damage, and a lot of deer damage too.

It's as seasonal as the falling leaves and about as welcome as soaring gas prices, but the arrival of deer-mating season has many motorists girding for what officials predict could be a record year for deer crashes in the Washington suburbs.

Fairfax County police estimate that as many as 5,000 collisions involving deer occurred on county roads last year. The number of deer-related crashes reported in Montgomery County has held steady at about 2,000 for the past several years, but officials say the actual number of incidents is considerably higher.

Although many blame development in suburbia for pushing deer onto the roadways in search of food, biologists say there are more deer crashes in large part because there are more cars.

"Even if you were able to reduce the deer population by half in a given period, it wouldn't make a difference if the traffic load is doubled," said Fairfax wildlife biologist Earl Hodnett. "You come up with the same number of collisions. That's part of what's going on right now."

Officials have been trying for years to curb the deer infestation that at its best infuriates homeowners by reducing their flower beds to bare soil and at its worst renders automobile side panels dented, windshields smashed and -- in some particularly violent crashes -- fatalities.

The problem isn't isolated to the suburbs. Rock Creek Park in the District has its own struggle with a rising number of deer and the problems they create.

"It's an issue that virtually every municipality in the central and eastern United States is facing," said Rob Gibbs, natural resource manger for Montgomery parks and chairman of the county's deer management work group. "It has a lot of people scratching their heads. It just isn't an easy problem to solve."

Cady Codding, 34, of Fairfax said she considers herself about as lucky as someone whose vehicle was struck by a deer can be. The crash occurred early Oct. 5 as the Freddie Mac accountant was on West Ox Road in Fairfax. In an instant, a deer smashed into the front of her Ford Escape, demolishing the fender.

If the deer had been larger and Codding hadn't been in a mini-sport-utility vehicle, she said she could have been the one who was badly hurt, as was the deer lying dead on the side of the road.

"It was awful. I didn't know what to do," recalled Codding, who thought first to call her father on her cell phone. "You'd think you'd hit deer driving out to the country somewhere, not off West Ox."

In fact, it happens all the time. According to a study commissioned by the Virginia Department of Transportation, an estimated 34,000 deer-vehicle collisions occur in Virginia each year. Experts say most of the crashes occur during dusk and dawn hours, mainly during the fall rutting season -- from mid-October to January -- and then again in the spring. One of the biggest mistakes drivers make, experts say, is assuming they're in the clear after they pass a deer on the side of the road. More, they say, are likely to be in close proximity.

Mike McCombs calls his encounter last year with a deer his "unidentified flying object story," recalling how the animal crashed into the passenger side of his GM van as he traveled down Leigh Mill Road in Great Falls.

"There's hardly anyone who hasn't missed or hit a deer in Great Falls," said McCombs, 64, who sees deer on the road regularly. "You can never tell when one is going to jump out at you on the stretches."

Planners continue to test new technologies, including car-mounted whistles, roadside blinkers and reflective prisms, all to discourage deer from leaping into roads. So far, officials say, none has proven to be a solid fix. And one reflector that was tried in Fairfax was shown to increase the number of deer-related crashes.

"The problem won't go away with what we have to choose from today," said Hodnett, the Fairfax wildlife biologist. "We can reduce it. We can make people more aware of it, but it will take some new technology that I don't believe is out there yet to solve it -- if that technology ever does come along."

Technological gizmos aside, research has shown that a few solutions -- particularly costly ones -- can lessen the problem. One involves the use of fencing to channel deer to well-lighted underpasses through which the animals can travel safely beneath busy roads. The solution, however, is better suited to new roads. Although retrofitting roads is possible in some cases, the costs are high.

Controlled hunting in some of the area's larger parks is effective, officials say, but the scope is limited and can't address the greater deer population.

The Metropolitan Washington Council of Governments formed a task force to take a regional look at the problem and possible solutions. The group's report could be released by the end of the year.

As for existing roads, some of the most troubled are in Great Falls, where dead deer litter the roadways during rutting season. Hodnett said techniques used in other parts of the country could be tried locally.

For example, he said, flashing lights could be erected during danger seasons (more effective, officials say, than the static deer-crossing signs that motorists tend to tune out). Another possibility, he said, is the use of the same flashing lights that would be turned on by sensors when animals approach.

Lisa Rymsza said it will take $2,200 to repair the damage a deer did to her Lincoln Navigator on Tuesday, as she took her son to the bus stop on Springvale Road near her home in Great Falls.

"He made a body imprint on the door," Rymsza, 38, said of the deer. "I try to be careful, watching for them. But it just literally jumped right out at the car."

Clyde Smith, 66, is a special projects director with the National Underwater and Marine Agency. His view of the deer that roam his eight-acre Great Falls property and the roads around it is considerably more understanding than those of many of his neighbors.

"If people will drive the speed limit, they're not going to have a problem," Smith said. "People move to Great Falls, and they chop down a lot trees and put up fences and plant flowers and [complain] about the deer. It makes no sense to me. I see the deer out front every morning, and I think it's wonderful to be this close to nature. The deer were here before we were."