A Brief History of the Patterdale Terrier 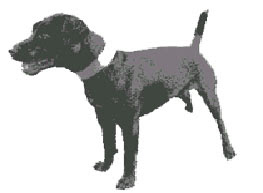 It’s amazing how mixed up and convoluted a breed history can become, and even more amazing that it can be confounded so quickly.

Consider, for example, the Patterdale.

First, there is the question of whether it is a breed at all, or simply a black smooth-coated Fell Terrier.

If one wants to argue that a Patterdale is simply a smooth coated black Fell Terrier, that’s fine. We could also say that a Jack Russell is a white Fell Terrier, couldn’t we? In any case, people who know Patterdales know one when they see one. Is there any other meaningful definition of a terrier breed ?

The use of the Patterdale name for a type of terrier goes back to at least the 1930s. Jocelyn Lucas notes that the United Hunt said it preferred to use Lakeland Terriers and “Patterdales from J. Boroman’s strain at the Ullswater Kennels”.

The characteristics of these 1930s Patterdales is not known, but it is worth noting that the Ullswater Kennels were famous for Border Terriers and the Patterdale breed, as we know it today, first sprang up in the 1950s in the breeding program of Cyril Breay who had been a Border Terrier breeder.

While the 1930s Patterdales are reported to have been shaggy black Fells, Breay’s early dogs are described as slape-coated black-ticked dogs with massive heads. Could these “Patterdale Terriers” have been genetic sports descended from a “blue and tan” Border Terrier? We will never know, as Cyril Breay kept no records, though he swore there was no Bull Terrier in his dogs.

Breay was a slight man and did not work his dogs himself, leaving that part of the job to his friend Frank Buck. Buck’s own line of dogs were descended from the Ullswater terriers kept by Joe Bowman (no doubt the “J. Boroman” noted by Lucas), and the dogs of the two men began to devolve to a type as lines were crossed and condensed.

Whatever their origin, the dog that showed up in the field in the 1960s, and continuing today, is a smooth, hard-coated dog of variable size and looks, and with a good track record of honest work. Patterdales have a reputation as being enthusiastic self-starters.

Though still a pure working dog, the future of the Patterdale is precarious. On one side are the show ring pretenders who value looks over utility, while on the other side are young fools crossing Patterdales with Bull Terriers and Pit Bulls, resulting in dogs that are too big and overly hard.

The good news is that there are a handful of breeders trying to keep the dogs right-sized and well-balanced between the ears. Some of these breeders have been breeding good dogs for decades, but it is a tough job and it is not clear that the next generation of terriermen is up to the task. Time will surely tell.

i wanted to post to first just give a hats off to this site and its creators i find it awsome and imformative....but secondly want to ask anyone on there opinion on bsl and hunting terriers? or wiether anyone feels that bsl would hinder terrierman in the states? walk in it.... urbanprophet

To be honest with a few dog types you do wonder; the breeder might be completely sincere in saying that he never knowingly crossed in a bulldog, but there's no telling if a bulldog cross terrier might not have had his wicked way with an in-season bitch somewhere in that breeder's set-up.

A similar thing can be seen in the world of horses. Connemara ponies are purported to be pure-bred natives, yet a hell of a lot of 'em show quite a few characteristics more typical of Arab horses (flighty temperament, dodgy feet and so on). That rather gives rise to the suspicion that somewhere back in their ancestry someone might've crossed in an Arab stallion just to put a bit of extra pep into their breeding strain, which pep has now spread right across the gene pool of that breed type.

Bulldog x greyhounds are, as a previous commentator said, becoming more common in Britain. Mostly they're being used as lurchers for lamping foxes and (possibly, I have no knowledge here) also badgers. The UK's Hunting Act was a spectacularly crap piece of legislation which convinced many a countryman that the government here was stark, staring bonkers (recent "protect the badger" protests over a cull of diseased animals also argues that quite a big section of the public is similarly lacking in wit) and that anything went.

Bulldogs are also seen in inner cities as "status dogs", and most of these animals are dangerously unstable nut-jobs which think that they are alpha in their family and behave accordingly if slighted. As we all know, a dog which thinks it is alpha in a human family is a dangerous beast indeed, as although it thinks it is boss, it doesn't understand about 80% of the human social cues.

As to retrieverman, were he a dog he'd be on course for a trip to the vet for castrating to see if that calmed him down any; if it didn't then a life as a farmyard bark-dog would beckon.

The patterdale is a fantastic dog but any moron that breeds bull dogs and Staffis into this breed are totally unhinged as are both these breeds of dogs. They both have so many problems you could covr 4 pages. so why breed then into a beautiful terrier line. Or is it just a man macho thing. Make it hard. God what morons

I dont see much sense in using bull lurchers for Badger.
Badgers dont exactly run fast and it would be a poor Bull that couldnt catch one.
Plummer and others have stated that the old Combat Bulldog in Britain was one of the types used to create working Terriers.
So Bull blood is in them all.
Working Jack Russell men here add in a bit of Working Staff every now and then.
Most always have.
Not all Staffs are the KC type or the wannabe Gangster muscle bound Bull type.
There are still old types about.
Even KC breeders will throw up the odd good one simply cause the genes are still floating around in there and will appear even when they dont want them.
I would doubt there is a Kerry Blue around that hasnt got EBT in its history.
When they were still a working dog the boys liked adding a bit of EBT for Teastos Mor.
If you dog is doing its job, why worry.

We use Patterdale x APBT with great success on Coyotes decoy, Bear work and Ground work. When bred right from the right dog they loose nothing.

Unknown said...
This comment has been removed by the author.
6:03 AM

Breay was a very slightly built man and an asthmatic and he never digged. He walked a bit, but not too far (a few miles at most). He may have met Buck at a dig where his dog was being used and got stuck, but he's not likely to have been the one shifting dirt. Breay mostly bred and showed dogs, and he and Buck had a very nice friendship with dogs going back and forth between then. But Breay was no digging man and depended on others to tell him if the dogs were up to it in the field.

ive owned a pit bull and it was by far easier than owning one of these dogs a friend picked him out when he was born and got it for us after our jack russel baby girl died and let me tell you if you are not hunting these dogs do not get for a house pet they are an absolute hand full unforenately by the time we eralized it there was nothing we could do the no kill shelter said they would have no choice but to put him down due to his temperment and me being who i am do not have the heart to do that and not enough money for traing i begged online to different associations but couldn't get any help i can't even take him to the vet cause he attacks me the miute hes harnassed and in car i pay alot of money for a vet to come to my house when needed and they have to sedate him to clip nails i have had this dog for 7 yrs and would miss the hell out of him if i had to get rid of him now so i guess you could say this is a dog only a mother could love,,,lol i feel extremely safe at night when my husbands at work though.

Looking for some advice. I have 3 female terriers. An old Patterdale and two 2 year olds, one a Jack Russel and the other a Patterdale. The old one looks like the Lakeland variation and the young one is more of a Mason type dog. The Patterdales get along great and even when the old one schools the young one the young one just accepts it. The young Patterdale and the Jack Russell also get along fine almost all the time. However, periodically the young patterdale will just rip into the Jack Russell for no reason that I can discern. When that happens there is always blood. The young Patterdale shows no inclination to fight with other dogs. All three are not neutered. The aggression noted is not connected to their cycles as far as I can tell.

If I can't stop the fighting I will need to get rid of one of them which I don't want to do. Any suggestions?