A Question of Breed 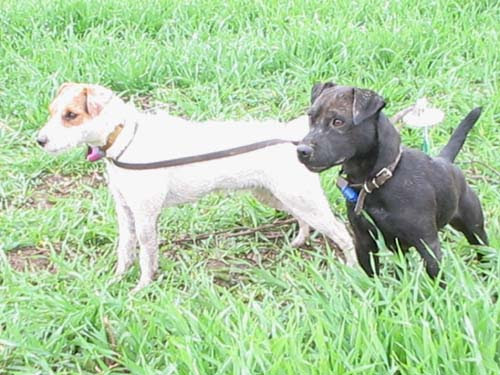 This is a repost from October 2005


The quarry does not care what breed a dog is so long as it is doing the job.

Yet breeds do matter to humans for the simple reason that the more we know about breeds, and lines within breeds, the more likely we are to get a dog that is of real use to us in the field. There is always a chance we will get a dud, of course, but we can reduce that risk if we pick the right breed, select the right breeder, go slow, and use a modicum of common sense.

There are more than 28 types of terrier, but only six working breeds worth talking about, and even fewer worth considering if you are looking for a dog in America, as of this writing (2005).

Of these six breeds, only three are real options for U.S. earth work. Let us dispose of the generally unsuitable dogs first.

The Plummer Terrier is simply a color variant of the Jack Russell Terrier. I like the look of this dog, but in truth a good terrier does not come in a bad color, and breeding for coat markings has always been a dangerous thing.

The Plummer Terrier started off as a genetic mess — a point well documented by Brian Plummer himself. The good news is that thanks to culling and out-cross breeding, most of the serious genetic problems have been worked out of the gene pool.

The bad news is that a new problem has worked its way in: the dogs are generally too large, standing 13-15 inches tall, with 14- and 15-inch dogs very common.

Of course size is not a problem if you are ratting, which was Brian Plummer’s specialty and passion and mostly what the dogs are use for to this day. If you intend to dig to groundhog, raccoon, and fox in the U.S., however, a 14-inch dog is simply too big for our tight earths. The issue is moot, in any case; as of 2005, Plummer Terriers simply do not exist as a working terrier breed in this country.

The Jagt Terrier is another breed that fails the American working terrier size test. The Jagt Terrier was created in Germany in the 1930s with the idea of being an “all purpose” hunting terrier able to flush rabbits and wild boar from dense brush, retrieve shot birds, blood track gutshot deer, and go to ground on fox and badger.

Unfortunately, dogs are specialized for a reason, and the Jagt Terrier is, at best, a second choice in all of these tasks. When it comes to fox work, the standard for the Jagt Terriers (13" to 15" tall) calls for a dog that is simply too big for our tight American earths. There are some very small Jagts that do well, but the gene pool is dominated by larger dogs, and Jagts should only be considered, in my opinion, if it is a full-grown adult and significantly smaller than the standard.

The red Fell Terrier is a type of non-pedigree Lakeland Terrier found in the north of England. This dog would have much to recommend it if small versions of this breed could be found in the U.S. Unfortunately, as of 2005, there are only a handful of red fells in the U.S., and even fewer that are sized for our tight earths. If you can find a small dog, go for it, but the chances of locating such an animal are slim to none.

We now come to the three types of working terriers available in the U.S. which also have some hope of being the right size: the Border Terrier, the Patterdale Terrier, and the Jack Russell Terrier.

Border Terriers are wonderful dogs, but finding one that is the correct size and has a small chest is very difficult in the U.S. Few Kennel Club Border Terrier owners keep size records going back generations, and the chance of being able to select a small one out of a gene pool dominated by large dogs is about as likely a picking the trifecta at Belmont Raceway. The chance of finding one that has worked three types of quarry is close to zero.

Unfortunately, the other alternative — buying a small adult dog — is also virtually impossible as Border Terriers are not common in the U.S., and most dogs are placed as pups and never relinquished (hardly surprising after a sum of more than a $1000 has changed hands). As for finding a small adult working dog for sale -- forget it.

Border Terriers have wonderful winter coats, but these same coats tend to result in an overheated dog in summer when so much groundhog work is done. The dog that never gets cold in winter, simply flops over in summer heat.

Finally, it is worth mentioning that Border Terriers are, as a rule, slow to start. While a Jack Russell or Patterdale will usually start to work between 10 months and one year of age, Borders Terriers seem to start a full year later. There are exceptions to the rule, to be sure, but I have spent a fair amount of time around Border Terriers, and it’s best to plan on a late starter and be surprised than depend on an early starter, and be disappointed. Borders are not the “One Minute Rice” dogs so popular with young terrier enthusiasts today — one reason they may have experienced a decline in popularity in the field.

Patterdale Terriers are rapidly rising in popularity in the U.S. and they have much to commend them. Unfortunately, as Patterdales have grown in popularity, they have also grown in size. This is particularly true in America, I am afraid to say, where Patterdale Terriers have suffered a terrific genetic beating at the hands of young want-to-bes who have crossbred them with small pit bulls. Large numbers of these overlarge black dogs have been cranked out to be sold off on places like “Bay Dogs Online.” Here the ads read “will hunt anything.” “Has hunted nothing” is more likely the story. Pictures of chained out “yard dogs” may be offered at referring web sites, and dogs are sometimes swapped for auto parts or sold in groups by get-rich-quick failures who are now having “Kennel Reduction” sales.

Having raised a caution about size and breeders, it should be said that if you can find a nice small Patterdale, 12 inches tall or smaller, and with a nice tight chest of 14 inches or less, these dogs generally make exceptional workers. Caveat emptor, as with all terrier purchases, but if are flinty and properly focused on getting a small enough dog, you can do very well with a Patterdale.

Finally, we get to the Jack Russell Terrier. What a divergent mess of registries and types this breed has become! Some Jack Russellls have ears that are erect, some down, some are longer than they are tall, some are pure white, some are as parti-colored as a beagle. There are smooth coats, broken coats and dogs hairier that a Wookie straight out of Star Wars. A Jack Russell’s legs may be straight as sticks or as ornately curved as those of a Queen Anne bench. Its chest may be as small around as a lady’s bracelet, or as big around as a bowling ball.

How do you sort it out?

Simple: Get a dog registered with the Jack Russell Terrier Club of America, and accept no substitutes if you are looking for a working Jack Russell. Let is be said that I am not affiliated with the JRTCA in any way. I do not breed dogs, I do not show dogs, and I do not judge dogs. My reason for recommending the JRTCA is solely practical: The JRTCA records the size of dogs and also offers working certificates. The result is a documented track record of work and size that can be tracked across a five-generation pedigree. When you are looking for a working terrier, nothing is more valuable.

Buyer beware, of course. Most JRTCA dogs are show dogs or pets, and only about 5 percent hunt. The good news, is that with a JRTCA dog you can look through a pedigree and see whether there is a track record of work, and also ascertain the size of the dog’s dam, sire, grand-dam and grand-sire. With hundreds of well-documented working JRTCA dogs in America, the chance of finding an acceptable working terrier is higher in the JRTCA gene pool than anywhere else.
..

I wonder if the trend of having micro dogs will somehow spread to other breeds, bringing them to working size? Perhaps all the Britneys, Parises and Lindseys will do some good for this world.

Oh heck with it, I'm going to get a small primate instead.

Patrick, there are two dogs at our local dog park that I just have to send you photos of. I believe they are both borders, but they are tiny tiny tiny. Scrappy, good natured, beautiful little guys. I think you'd be impressed. :O)

I love Borders and have had them for a long time, but not again soon, I think.

There are a few small Borders -- not many, but a few. The problem of nonworking borders and too large a size on Borders is a global problem. There are a few folks in the UK who are trying to turn things around, but it's an uphill battle in sand because the nonpedigree Fell/Patterdales work and are cheap and are properly sized. Why pay $1,000 for a pup from a nonworker who may also be too big to boot? The Border breeders sniff that the working folks "aren't willing to pay $1,000 for a dog," and clucking because a dog might actually get a knick working underground.

I should mention that the black dog -- a patterdale -- in the picture was a rescue placed into a working home throgh this web site. A handsome dog with a deep voice and a love of all things dirt. I was very glad to get out in the field with him a few years ago. The white dog is owned by another friend who came down to bang on the shovels a bit. A fun day, as I recall (a skunk was involved at one point).