Selling Nationalism at the Dog Show 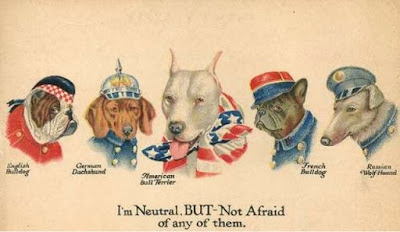 Beginning in the mid-1850s, an explosion of interest in natural history, in part triggered in part by the work of Charles Darwin, rolled through Europe.

With the rise of naturalists came the chopping knives of taxonomists, each eager to "discover" a new species of animal or plant and name it after him or herself.

As people began to understand that land forms and climate were instrumental in creating and maintaining species, a blurring of natural and national identities began to take shape.
The British, the French, and the Germans, for example, began to think of certain animals and plants as part of their own unique cultural heritage, and this soon extended to farm stock and even dogs.

All of this was soon influenced by the writings of Darwin's cousin, Francis Galton, who suggested that evolution could be pushed into hyperdrive by closing breeding pools in order to enforce "purity" uncontaminated by deviance or variation.
The origin of this idea, of course, was Robert Bakewell, whose work had deeply influenced both the thinking of Charles Darwin and his grandfather, Erasmus Darwin, author of Zoonomia, one of the first works broaching the idea of evolution.
All of this was coming to a point in 1873 when the first Kennel Club dog show was held at the Crystal Palace in London.
The start of "big ego and big money" dog shows had begun.
In short order, every type of landrace dog in Europe was being shivered into new breeds, with each breed pool closed (often with less than two dozen dogs enrolled) in order to create a contrived marketplace for those wishing to engage in conspicuous consumption.
It seemed every nation had to have its "own" national breed of nearly every canine type, and so a rather undifferentiated pool of curly-coated waterdogs was split into the Irish Water Dog, the French Water Dog, the Portuguese Water Dog, the Spanish Water Dog and the Poodle, which in turn was shivered into three sizes and over a dozen colors
The slightly wolf-looking shepherd dogs were divided into German Shepherds and Belgium Shepherds, which were followed by the creation of Dutch Shepherds, Anatolian Shepherds, "Australian" Shepherds, and dozens of others, some of which are not shepherd dogs at all.
The terriers were divided into Scottish Terriers, Welsh Terriers, and Irish Terriers. Soon enough there were two dozen breeds here too, not all of them terriers in any way, shape or form, and all of them with just-invented histories claiming either ancient landed lineage, specialized work, or a noble or noble-adjacent provenance.
And this kind of thing is still going on.
A Czech dog fancier created the Cesky terrier, for example, which is nothing more than a simple crossbreed of two British dogs.
The Swiss-Italian fantasist Piero Scanziani created the Neapolitan Mastiff overnight from a dog he did not breed and based on sample size of one.
Even Madagascar, right at the edge of the world, invented its own breed, the tiny poodle-like

Coton de Tulear which, it is said, was brought to the island by pirates to... (checks notes)... hunt alligators and boar.

And just the other day I got an inquiry about something calling itself a "Brazilian" terrier, which may be descended (cough cough) from the Gos Rater Valencià, first recognised by the Real Sociedad Canina de España in 2004.... Or perhaps it is descended from the Ratonero Bodeguero Andaluz, first recognized by the Spanish Ministry of Agriculture and by the Spanish Kennel Club in... (checks notes)... 2000. One thing is for certain: this is *not* the same dog as the Japanese Terrier or its progenitor, the Kobe Terrier. Nor is it the same as the Chilean Terrier (first recognized by some doggy outfit called the "Alianz Canine Worldwide" in 2011) or the Australian Tenterfield Terrier (first named by an Australian TV-show host in 1990).
All of these are very different dogs.
Allegedly.
I have had some fun mocking these kind of just-invented canine histories associated with regional identities, creating the Kill Devil Terrier, the White-toed Minnesota Chipmunk Dog, the Shenandoah Mountain Cur, and the Genesee Valley Beaver Dog, among others.
And why stop?
The Belgian Shepherd has been shivered into four breeds, one of which has fewer than 1,000 examples in the world?

Why not shiver them into five examples and claim to own the most rare example of them all?  No reason at all.  And did you know that this most-rare breed is actually the foundation dog of all other Belgian Shepherds and is, in fact, a direct descendant of the dog owned by Saint Hubert when he cured people of rabies by poking hot nails and keys into their wounds? 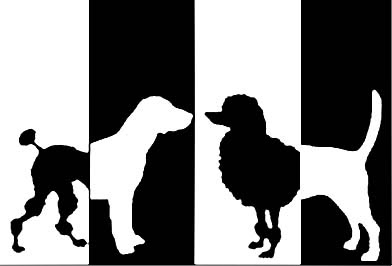