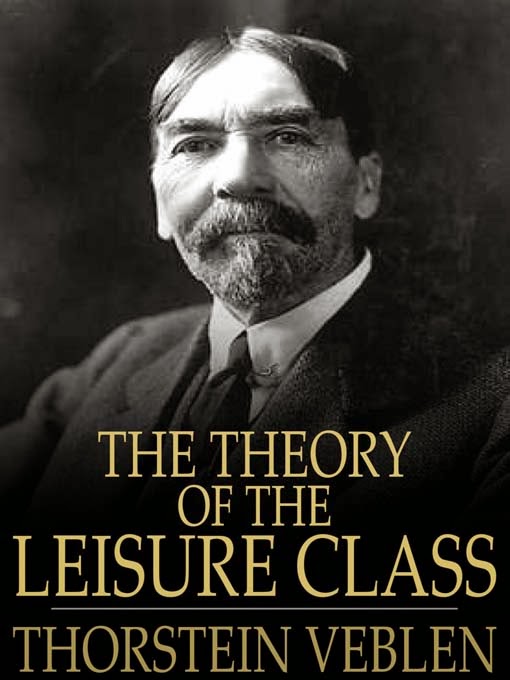 In 1899, Thorstein Veblen published a book entitled The Theory of the Leisure Class, in which he coined the term "conspicuous consumption."

Veblen's thesis was that America was aping feudal Europe (and England in particular) by separating itself into low-caste people who did the manual labor and trade work, and the "leisure class" who owned the land, preached the sermons, ruled the military, owned the factories, and never got their hands dirty.

In this country, for instance, leisure-class tastes are to some extent shaped on usages and habits which prevail, or which are apprehended to prevail, among the leisure class of Great Britain.


“Conspicuous consumption" was important because flaunting spending without any sensible purpose, was how you demonstrated that you were not a member of the working or "productive class" but were in fact part of the "leisure class" or "predator class."

The dog has advantages in the way of uselessness as well as in special gifts of temperament. He is often spoken of, in an eminent sense, as the friend of man, and his intelligence and fidelity are praised. The meaning of this is that the dog is man's servant and that he has the gift of an unquestioning subservience and a slave's quickness in guessing his master's mood. Coupled with these traits, which fit him well for the relation of status — and which must for the present purpose be set down as serviceable traits —the dog has some characteristics which are of a more equivocal aesthetic value. He is the filthiest of the domestic animals in his person and the nastiest in his habits. For this he makes up is a servile, fawning attitude towards his master, and a readiness to inflict damage and discomfort on all else. The dog, then, commends himself to our favor by affording play to our propensity for mastery, and as he is also an item of expense, and commonly serves no industrial purpose, he holds a well-assured place in men's regard as a thing of good repute.

The dog is at the same time associated in our imagination with the chase — a meritorious employment and an expression of the honorable predatory impulse. Standing on this vantage ground, whatever beauty of form and motion and whatever commendable mental traits he may possess are conventionally acknowledged and magnified.

And even those varieties of the dog which have been bred into grotesque deformity by the dog-fancier are in good faith accounted beautiful by many.

These varieties of dogs — and the like is true of other fancy-bred animals — are rated and graded in aesthetic value somewhat in proportion to the degree of grotesqueness and instability of the particular fashion which the deformity takes in the given case.

For the purpose in hand, this differential utility on the ground of grotesqueness and instability of structure is reducible to terms of a greater scarcity and consequent expense.

The commercial value of canine monstrosities, such as the prevailing styles of pet dogs both for men's and women's use, rests on their high cost of production, and their value to their owners lies chiefly in their utility as items of conspicuous consumption.

Indirectly, through reflection upon their honorific expensiveness, a social worth is imputed to them; and so, by an easy substitution of words and ideas, they come to be admired and reputed beautiful.

Since any attention bestowed upon these animals is in no sense gainful or useful, it is also reputable; and since the habit of giving them attention is consequently not deprecated, it may grow into an habitual attachment of great tenacity and of a most benevolent character. So that in the affection bestowed on pet animals the canon of expensiveness is present more or less remotely as a norm which guides and shapes the sentiment and the selection of its object.


Of course, one does not actually have to be rich to insinuate yourself into the upper class.

If you are an elementary school teacher from Peoria, or an accountant from Westchester, you can simply buy a pedigree dog and spend your weekends campaigning the animal at shows.

As I noted in post written over a decade ago,

In short, the attraction of dog shows was that people who themselves were as common as a turnip top could now fancy that they were among the social elite. They did not have to have real knowledge of animals, or have an important job or title or large estate -- they just had to purchase a dog from a "reputable" show breeder and put on airs.


Or as one character in Best in Show put it, "make Fern City proud!"

Here some common sense- from a practitioner of two voodoo sciences- sociology and economics. He is 100% right in all he writes in this post. Goes to show that intelligent thinkers don't need all the jargon of pseudoscience to be dead on!

Thanks for unearthing that quote.
At the time Veblen was writing the monstrosities weren't half so monsterous. I wish it were possible to get his reaction to modern pugs, bulldogs, Frenchies, mastiffs, etc.

Veblen was certainly a unflinching observer of his times and also lived a pretty basic life. Doesn't sound as if he was a big fan of dogs in general, though.