The Death of the Priest Class 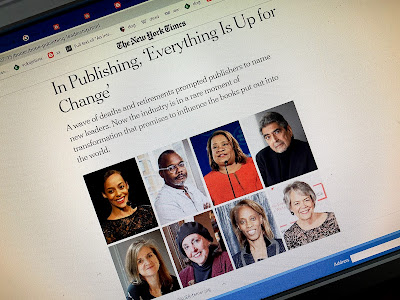 Over at The New York Times they put up an article about the fact that white men are starting to see the rise of women (Ugh!) and minorities (Good Lord!)
The piece, entitled "In Publishing, ‘Everything Is Up for Change’" says that "A wave of deaths and retirements prompted publishers to name new leaders. Now the industry is in a rare moment of transformation that promises to influence the books put out into the world."
Matt Mullenix asks how institutions like newspaper, book, and magazine editing, which have systematically excluded alternative viewpoints and perpetuated that exclusion over generations (the orginal "cancel culture"), can reshape itself to prepare us for a different future: "one that leverages — to the benefit of all —  the vast untapped potential of the people we’ve worked so hard to reject?"

It's a good question.  In a note I suggested that maybe the answer was to to be found in reframing the question.

Let me frame the question a but differently: Do we need a “priest class” any more?
Back when I had hair, and the Columbia Record Club was a thing, a small group of “priests” decided whether you got recorded and promoted.

That was “the business” of music.
The same thing happened with books, magazines, newspapers, and even movies.
But we no longer live in the age of schooners and candles.
It's nearly 09 ADSJ (after the death of Steve Jobs), and no one needs to rent a recording studio or pay a 98 percent cut to the nameless and the faceless when, for $5,000, you can put a studio in your basement better than anything the Beatles ever recorded on.
Want to publish? It’s free, and I assure you that your book will be as well promoted by yourself as any publishing house ever did.
Let’s face it: publishers did next to nothing to promote 99.5 percent of all books. Ditto for the A&R guys in music.
The real “job” in all these industries was controlling access to the the bottleneck of production and promotion that went to stores — stores which mostly no longer exist in a world in which books and newspapers do not depend on paper or ink, and music needs no vinyl.
If you’re writing something with any kind of demand and sell 5,000 copies, that’s $50,000 in the door to you, and no publisher will pay you that sum for those kind of sales.
The old guard in publishing, music, newspapers, and magazines have skills.... but also a lot of blind spots. You can be a blackbelt on the Oxford comma, and a whiz at reducing copy with an El Marko, but what do you know about Audible, Twitter, online marketing, and pod casts? What is best practice for paywalls, free first chapters, Google books, etc.?
White folks (men mostly) sitting at the Big Table of book, magazine, music and newspaper publishing is dying off because we don’t need priests anymore .... of any color, gender, or ethnicity any more than we need most brick and mortar stores.
I download my music on the phone (or get it for free on streaming services), listen to books on Audible, crack open the ancient classics on archive, look up obscurity on Google, and repair the fridge base on a Youtube video while I cook a recipe I found on Pinterest.
My recently purchased kayaks came mail order to my door, as does most other stuff from coffee to shoes.
No one buys paper maps anymore.
Books?

You mean those things holding down the little tables by the bed and the big chairs?

As Donald McCaig once noted to me, who is reading books these days? We’re all reading Twitter and Facebook, emails and web sites.
All editors want to imagine they are Max Perkins, and some are.... but that economic world is not coming back, and it’s not clear it needs to.
The bitter truth is that there’s more great research, writing, photography, graphic design, music, and film today than ever before. The proof is in the pudding, and the only place where things have well and truly gone to shit is television news.
So who is the new Priest Class?
We all are.
We rank sellers and buyers on Ebay, forward thought and humor on Facebook, search for topics of interest on Google, compare prices and goods on Amazon, and we are all competing and playing on a relatively flat playing field.
Mostly, it works.

Matt noted that his just-produced book on falconry fundamentals, written and produced during the pandemic (yeah, Matt is that guy) was a total investment of a few hundred dollars and the royalties he's getting back are 7 times the percentage he's made published through others. He made his investment back on release day, and the rest is gravy.
I have had similar experiences. Back 1991, I wrote a 100-page monograph on eradicating street drug markets long before “Print on Demand” even existed. My boss at the time wanted to know what we should do with the copy — I think he was thinking of selling it to a publisher. I said we’d make all of $500 if we did it that way, and instead why not print 2,000 copies and see what happened?

When the dust settled, that publication brought in over $500,000 in sales, with cities buying as many as 1,000 copies at a crack  That still amazes me.
Even the crappy little working terrier book I put out to stop a half dozen American fools from killing their dogs from ignorance and inexperience made $2,000 profit on Day One. Not a big seller (no promotion, a very small universe of folks digging on terriers in the US), but I’ve never had a vet bill since.
Which is a bit of a goose to me.
You see, I have had a very solid and commercial book inside me for at least 8 years; fully outlined and well-researched.  I have the time to write it and my mind is not getting stronger.  I damn well better get on it
But no, don't ask me about it.  I will not talk a book to death.