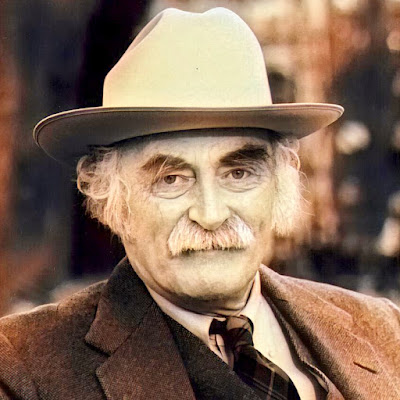 His body is gone, but the books and ideas endure.  From The New York Times, The Washington Post, National Public Radio, Stars and Stripes.  God speed Donald.

He trained Marines to shoot, taught philosophy to college students, and worked as a producer for Murray the K, the influential rock radio DJ. But after settling in to a lucrative copywriting position at a Madison Avenue ad agency, Donald McCaig grew restless — and decided to reinvent himself as a farmer and writer.

So in 1971, as the back-to-the-land movement pulled his friends toward communes in the countryside, he and his girlfriend acquired a 280-acre farm in the Allegheny Mountains of western Virginia. Their 19th-century cabin was unheated, unfenced and plumbing-free. By the end of their third lambing season, nearly half of their sheep had died.

When McCaig suggested buying a working dog to help with the flock, his girlfriend, Anne Ashley, asked him, "Where are you going to find one that types?"

Yet after shifting sheep duties to Ashley, whom he later married, and buying a puppy named Pip, McCaig's writing career began to take off. His dog served as the inspiration for "Nop's Trials" (1984), an acclaimed novel about a border collie, and led him to become an expert on sheepdog breeding and psychology. His interest in local history led him to write "Jacob's Ladder" (1998), a richly detailed Civil War novel set in Virginia. And he was selected by Margaret Mitchell's estate to write a sequel to "Gone With the Wind," published in 2007 as "Rhett Butler's People."

oh no! so sad to hear this...
Blessings Donald

i grew up on his writing-
''Eminent Dogs, Dangerous Men'' 'nuff said...