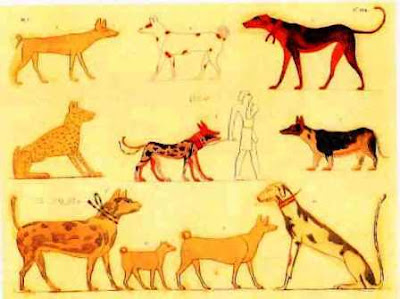 Lot of dog types were depicted on Egyptian tombs! source

The Egyptians mummified scores of thousands of animals, including many dogs.

When we look inside these ancient mummies, however, what do we find?

Instead, we find pariah dogs almost identical to those found lounging around the pyramids of Egypt today. 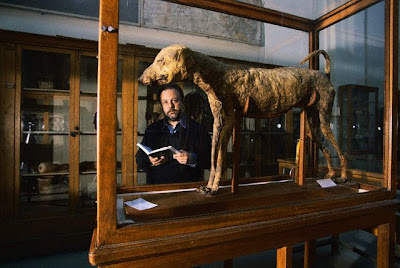 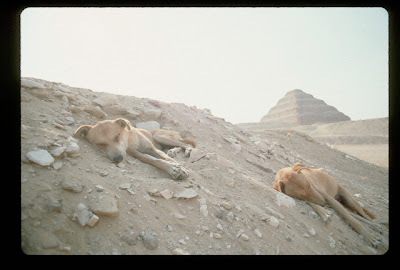 Pariah dogs resting at the Saqqara Step Pyramid at Djsor. 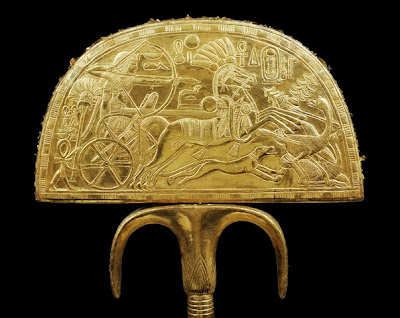 Dog on the fly whisk of King Tutankhamen.

Of course different types have different functions, and some things (such as leg length and body size) are more important than others (such as ear type and tail set).

In flat country, where larger quarry can be coursed over open ground, a larger running dog is commonly found, while in thick forest, smaller animals may be hunted with dogs that are no bigger than terriers.

Coat length, of course, will tend to lengthen or shorten depending on weather.

Of course broad types of landrace pariah dogs of no particular breed are not the story Kennel Club enthusiasts want to tell when they look at the paintings on Egyptian tombs.

Where's the fun in that?

And then, of course, there are the Basenji enthusiasts who proudly proclaim any dog with prick ears and a curly tail to be a Basenji, and never mind that such dogs have existed the world over since the beginning of time.

Look at the bas-relief below, from the tombs at Saqqara, for example. We are told this is a "Basenji" simply because it has a curly tail and prick ears. But do you notice a problem? This collar-wearing dog is taking down an Oryx, a type of gazelle which can weigh more than 200 pounds. That's quite an impressive feat for a "Basenji" that stands just 15" tall and which might weigh all of 25 pounds! 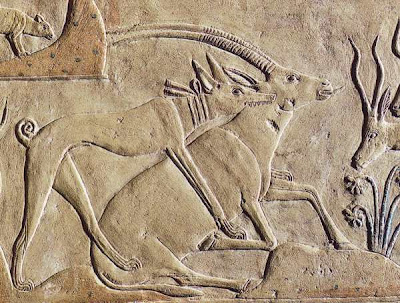 Of course there is another problem; the dog did not move from south to north in Africa, but from north to south. So if there were ever Basenji-like dogs in Egypt, then that is where they started from, not where they were exported to, and never mind that this is the opposite of the "creation story" commonly told in the Basenji community.

No matter. Myth and fantasy are important to all cultures, and that is as true in London, New York and Kansas City as it is in the Congo, Cairo, and Timbuktu. Not all dogs can be as well documented as the Kill-Devil Terrier, the Darwin Retriever, or the Shenandoah Mountain Cur.
.

There's an interesting account of the history of the dog in Africa on the Africanis website at http://www.africanis.co.za/history.htm.

Yes, already linked to under the paragraph below the last picture.

Fair Warning - Emily Cain, "founder" of this marvelous website, would never, ever claim such a thing.

While I would not say that is necessarily the basenji breed taking down that gazelle, I do know basenjis have hunted game that size. In fact, not long after they were brought to the US, there was a basenji male who got angry at a bull moose, and killed it, even though it nearly killed him to do it.

No, I don't have the proof.

The current day breed bears little resemblance to the original dogs brought over, and lacks their overall toughness.

I was always under the impression that what the "pariah dogs" are is Kelb Tal Fenek and Podenco /Cirneco. Basenji, and Saluki types , clearly sighthound though
I have seen a Basenji nail a deer with my own two eyes,I have also watched my pharaoh hound dig a nearly 7 foot hole to get a mole do not under estimate them

Since Basenjis were the dogs of the pygmies - and the Egyptians brought pygmies to Egypt as curiosities, it's quite possible THOSE dogs traveled South to North. . . .(see Pygmies and Dwarfsx in Ancient Egypt, 1938).