The Mullahs of Texas 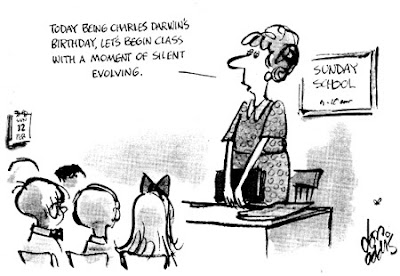 From The Wall Street Journal:

The Texas Board of Education will vote this week on a new science curriculum designed to challenge the guiding principle of evolution, a step that could influence what is taught in biology classes across the nation.

The proposed curriculum change would prompt teachers to raise doubts that all life on Earth is descended from common ancestry. Texas is such a huge textbook market that many publishers write to the state's standards, then market those books nationwide.

"This is the most specific assault I've seen against evolution and modern science," said Steven Newton, a project director at the National Center for Science Education, which promotes teaching of evolution.

Texas school board chairman Don McLeroy also sees the curriculum as a landmark -- but a positive one.

Dr. McLeroy believes that God created the earth less than 10,000 years ago. If the new curriculum passes, he says he will insist that high-school biology textbooks point out specific aspects of the fossil record that, in his view, undermine the theory that all life on Earth is descended from primitive scraps of genetic material that first emerged in the primordial muck about 3.9 billion years ago.

He also wants the texts to make the case that individual cells are far too complex to have evolved by chance mutation and natural selection, an argument popular with those who believe an intelligent designer created the universe.

In Japan and China, they are cheering this on, as the rejection of Darwin will set back American schools 100 years, and guarantee that Asia will dominate the global economy for the next 100 years, the Golden Age of Biotechnology.

In Iran and Iraq and Afghanistan, they are cheering this on as well, but for a different reason.

Could the religious zealots of the Taliban variety gain a foothold in the U.S.? It appears they are well on their way to do so. And all you have to do to help is remain silent...

I don't know whether to laugh or cry! Would you want to be treated for cancer by a doctor that didn't believe that cells can spontaneously mutate?

Can't wait until I go to the M.D. Anderson Cancer Center and they cure me through the laying on of hands.

'Scuse me, my head is about to explode and I just may well begin to speak in tongues!

If this guy weren't in prison, he'd be one of their star experts:

If you want to waste say two hours of your life, and laugh really hard, watch that whole video.

It's Creationism + Cryptozoology. And that equals one zany analysis.

And Sir Karl Popper rolls over in grave.