Will Ronnie Irving Lead or Be Pulled Screaming? 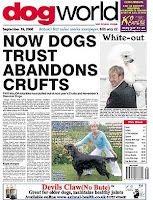 Will Ronnie Irving, Chairman of the Kennel Club, lead the organization or will be be pulled screaming into the 21st Century?

When the history is written, will he be seen as the man who stood by as the UK Kennel Club, like its American counterpart, foundered and sank on the rocks of common sense and the free market?

Or will he be seen as a man who understood that the time for change was at hand?

Time will tell. What Ronnie Irving does in the next few months will be his epitaph one way or another.

The time for reform is clearly here. As Dog World observed in a recent article entitled "Now Dogs Trust Abandons Crufts," the BBC is no longer willing to stand idly by:

AS TWO major charities pulled out of next year’s Crufts and November’s Discover Dogs, the BBC announced it had appointed an advisory panel to decide what measures the Kennel Club should take now and commit to in the future.

That advice would form the basis of speedy discussions, the BBC said, before planning began from coverage of Crufts 2009.

On Wednesday the BBC stated that it was "seeking reassurance, on behalf of its viewers, that the objectives, practices and organisation of the breed competitions at Crufts have as a first priority the health and welfare of all dogs taking part in the competition".

The panel will be asked to consider "the issues raised about the health and welfare of dogs taking part in the breed competitions at Crufts."

By contract, the BBC has to film Crufts through 2009.

That said, it does not have to have the same prattling announcers sputtering nonsense about the breeds, does it?

How about having honest assessors of the breeds come on to talk about the defects, deformities, and diseases of each breed?

How about talking about the misery cost of the defects and the cash cost of veterinary care as well?

If the Kennel Club insists of having a parade of defects, then let's see it announced as that.

And while we are at it, let's talk about all those dog breeds that do not work. People still hunt, use sled dogs, race dogs, use herding dog, and needs dogs for protective work. The fact that Kennel Club dogs are not seen in the field very often is not a small point -- let's explain why.

And would people watch such a show? In droves! Something NEW and TRUE is being said. There is always a market for that!
.
.

I am suprised in all these kennel club discussions that no one has brought up the more positive aspects of the UNITED Kennel Club(UKC), which has been around in the U.S. since 1898, and has always put more emphasis on function rather than just conformation. I attended a UKC Plott Hound event, where, although they had a "bench" show, it was blatantly apparent that the activities involving actual hunting skills were what was considered more important(activity and discussion-wise). I have spoken with otheres that say UKC events are more family friendly and not nearly as horrendously political and snobbish as AKC conformation shows. The UKC oriented people have zero interest in AKC registered dogs, and have been tooling along for generations doing their own thing, and not caring one whit for being snubbed by the AKC-types. But because they don't wear suits-and-ties or dresses to their events, perhaps they do not impress the general public as much. After all, the PEOPLE participating at AKC conformation shows are being "judged" every bit as much as the dogs, you can be sure.... I'd like to hear some UKC folks join in on these discussions, but they are probably too busy out huntin' with their dogs!...L.B.