Pekingese Standard to be Changed by Kennel Club 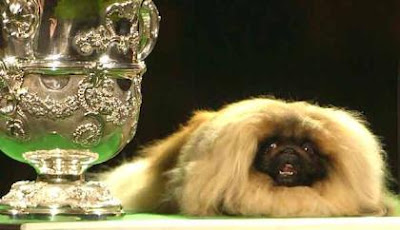 This Crufts winner is so wrecked it has to open its mouth to breathe and is sitting on an ice pack so it does not overheat.


Dog World reports that the Pekingese breed club is the first "to feel the force of the Kennel Club’s new get tough policy" in the wake of the airing of Pedigree Dogs Exposed. The Kennel Club has reportedly written to all the Pekingese Club secretaries telling them that it is going to change the breed Standard "with health issues in mind"and "as a minimum" remove reference to "profile flat" from the head and skull clause.

Now about the other breeds?

And how about ending the closed registry system that is the source of so much genetic destruction?

How about it Kennel Club Chairman Ronnie Irving?

How many dogs have to remain damaged, diseased, deformed and defective as a result of Kennel Club policies?

Is the Pekingese the only one you will will step in for? And only after the travesty of putting Danny up (he is pictured at top) for the top ribbon at Crufts -- a dog that could not breathe, could barely move, and had to sit on an ice pack so it did not overheat while standing still?
.

Don't forget the temperment issues in breeds too. For instance the akita standard says aggressive to other dogs. Perhaps breeders should be breeding AWAY from that trait. If it can be prevented or toned down shouldn't we?

And I don't believe breeding away from dog to dog aggression will dampen down the drive in a dog like others have suggested. Would love to hear our thoughts on that though.

Good golly Miss Molly! Get a load of the nest on that rat.

No wonder the thing needs a block of ice to lay on, it's like a bizarre cane rat / bulldog cross in a mini wookie suit under limelights. Somebody should shave the poor thing -- probably earn its undying gratitude, for what that's worth.

You have to start somewhere to be honest, a good first step

As the owner of a Harlequin Peke named Mr. Moe, I am relieved that the standards are being changed. i cannot imagine Mr. Moe not being able to run, jump and play while on our walks. Imagine having having to live on a block of ice to breath. Shameful!!! The owner should sleep on a bed of ice!!

So hard to understand…

We breeding Pekingese for more than 20years in Portugal, and on summer is very hot weather, some times with 40º in some hot days…
Thanks to God, that we have a big stone home, fresh on hot days, but we never used an ice pack.
We have our “Ch Armani Drummondville” an red Pekingese, a long coat and without any nose, he runs, he jump, he do everything he pretend to do, and is a very healthy dog as well.

I do not understand why the Club pretends to change the Standard only by this situation on show…
I do believe that the Club should change the mind of some persons and exhibitors, that remains the exemplars in no conditions, like maintain exemplars on cold rooms just to make all the long hair, loosing the “body shape” as we can see in some actual exemplars on show.

Another opinion about, I do believe that should help, as a first step by the Club, to make a visit to that exhibitor to see how are the conditions on him kennel, to see if it is a common problem.
Than I do believe as well that the Club should send a few number of inspectors to visit a considerable number of national breeders to see if the problem is only of one breeder of if it is a common problem in the entire national breed.
After the results of the study I do agreed with the final results and decisions from the council of the breed.
It is not easy to change the standard on exemplars of a line breed with years, only by a problem with one exemplar and an exhibitor.
I do believe that the change was an action taken with out some reflections on the reaming situation all over the world.

Why is there no illustrated breed standard for this breed?