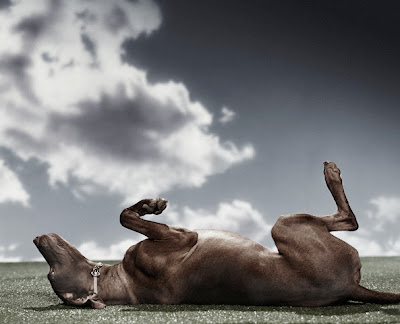 All things being equal, smaller dogs tend to live longer than larger dogs.

Of course, not all things are equal, and that is especially true in the dog world.

Take a look at the two graphs below, for example. Though they may look similar, they are not, as they are actually plotted on different axes. 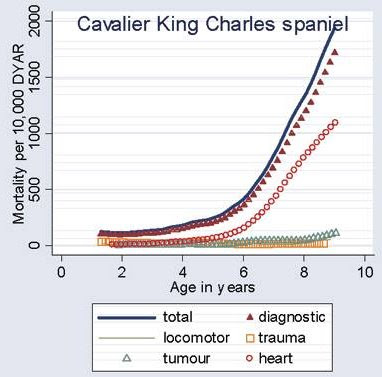 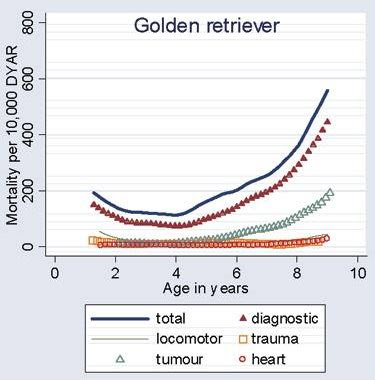 It turns out that Cavalier King Charles Spaniels are so unhealthy their mortality cannot be graphed on the same scale as that of the Golden Retriever!

In fact, in Sweden, where this data comes from, it seems that the Golden Retriever is about as healthy as a mongrel -- and in fact may be a bit healthier.

As the Swedish longitudinal analysis of over 350,000 dogs in the Agria Insurance data base notes,

Golden retrievers were at low risk for mortality in this study – only 22% died before 10 years. Golden retrievers were significantly less likely to die of trauma and heart disease and were in the baseline (average) risk group for neurological and tumour causes of death. They were at increased risk in the first age category for locomotor problems, but this effect waned with age as demonstrated by a negative age-breed interaction. 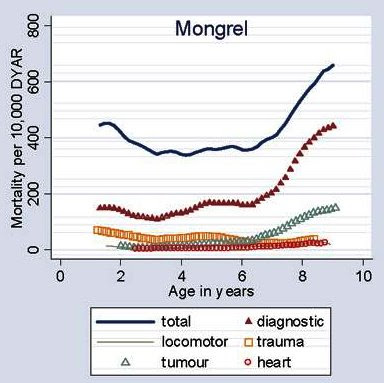 As the Swedish study notes, breed-specific information gleaned from the insurance data can be extremely useful to people looking to acquire a dog and those trying to determine whether an investment in veterinary treatment is worth the expense.

Information on the average survival pattern for different breeds is useful clinical information. Prospective owners should understand that in getting, for example, either a Bernese mountain dogs or a golden retriever, the likelihood of the dog living past 10 years of age is very different. Most owners, once their dog becomes seriously ill or dies, are keen to know if the condition is rare or common, in general or in their breed. Many owners are especially concerned if they feel their dog has died prematurely, that is at a younger than average age. Veterinarians and their clients can also use survival statistics as part of informed decision-making regarding expensive veterinary care and for conditions in which quality of life is an issue. For example, an Irish wolfhound that has survived to eight years has a 76% chance of being dead before 10, whereas an eight-year old golden retriever has a 90% chance of surviving to 10.

WOW such an interesting blog...glad I found you! :)

Salukis (tazis, call them what you will) are very long lived, almost always over ten. My Ataika.s mother in Kazakhstan was 13-!!-- when she had her. John Burchard just buried an old male at 13 and says he had dogs in the same line that reached 17.
I'll email you a video from a friend in Germany of her old male from Afghanistan who was 17 a few weeks ago.

Of course this a great genetically diverse population that until recently was never "closed"...

This is an interesting study.

The only reason why I would think that goldens would have such mortality rates is that 1. Goldens were interbred with other retrievers extensively, 2. Goldens have two breed standards, and the FCI/Kennel Club Standard is notoriously not specific,3. We've always had dramatic type differences in the breed.

The Irish wolfhound isn't the same breed that killed all the wolves out of Ireland. That animal went extinct around the time of the American Revolution. George Washington sent for a pair of them, and none could be found in Ireland. The modern breed is a recreation of that type by a Scottish officer named Grahame. It was a cross between a deerhound and great dane. The original dog may have been smooth coated and more like a mastiff than a greyhound.

That would not be correct about the Wolfhound.

By the mid-1800s, there was still a small number of Wolfhounds in Ireland, even if there hunting wolves function was obsolete as there were wiped out 50 odd years before.

Captain Graham and associates decided to help the breed escape extinction, so brought up the remaining population. To increase the genepool, the stock was mainly crossed with the Wolfhound's close sister-breed, the Deerhound, and to keep some size, some Great Dane, which was a much different breed than today.

Various skulls and the sort were founded of a Wolfhound-type of sighthound from over the last few centuries, so they weren't a mastiff-type breed, maybe there was some smooth-coated individuals, but in the Irish climate it is between to have a rough coat.

Here is a painting of Wolfhound from about 1800:
http://www.irishwolfhoundarchives.ie/images/Ward%20painting.jpg

There is also the 'Mazzerene Hound', a crude statue of a Wolfhound-type dog from the 1600s, with a sighthound head and ears and long legs.