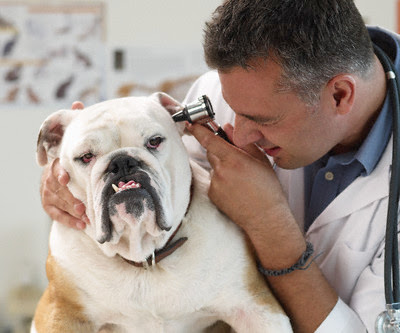 Below are links to the BBC show Pedigree Dogs Exposed. It is, as the producers correctly put it, "the greatest animal welfare scandal of our time."

Watch the whole thing. And then read Inbred Thinking for a little history of how we got into this mess.


As for producer Jemima Harrison, hat's off! You have put into video the true story of the Kennel Club, and you have held up the camera lens as a mirror.

If it looks ugly, it is because it is ugly.

If it looks immoral, it's because it is immoral.

If it looks ignorant, it's because it is ignorant.

And you want to know the hilarity of it? The ugliness, immorality and stupidity does not stop! In response to this show, The Kennel Club has gone out and hired a publicity machine which is spending hundreds of thousands of dollars buying "Google search terms" in order to steer people to the Kennel Club's site where ... wait for it ... a Dalmatian is the entry point graphic.

A Dalmatian! A breed beset by congenital deafness, and where bad temperament is a way of life!

A Dalmatian! The mind reels.

I am on dial up (and a dodgy dial up, at best) so can't watch the program but I do hope it airs on US TV at some point. The e-mail lists have certainly been churning over this controversial program and I would so much like to see it for myself!

I seriously wanted to vomit a few times while watching it. Freakish beauty pageant is correct.

What enrages me is that the kennel clubs whine when asked to require their members to have passed genetic/general health soundness tests before being able to register/show their dogs.

For an event that is supposed to be 'evaluating breeding stock' why the HELL is that considered 'going too far' by these people? It's true they care only about the money, and all the claptrap about 'loving the breeds' is BS.

I watched the entire show. The reporter brought to light the problem with poor breeding, and with poor Breeders! Those who breed unhealthy dogs, dogs with life threatening problems should be ashamed of themselves! Those who breed dogs who cannot do what they were designed to do (herd, hunt etc) are poor breeders who have more concern with themselves then they do with the dogs.

What I disagree with is that they admonished all linebreeding and cast a shadow on all breeders as bad and that simply is not the case. Linebreeding on healthy dogs, sound in mind and body is a good practice and brings us more sound animals, Breeding any dog with a known genetic disease either by linebreeding or outcrossing is simply stupid! The owner of the BIS Cavalier should be banned by that breed club. It’s not the method of breeding, it’s the Breeders themselves!

There is also another side to this story that they didn’t tell. How about the hundreds of breeds who are healthy and still do the jobs they were bred to do. Yes, in some breeds there are people who are only interested in the show aspect, but there are many more who use the dogs for work. In the sporting breeds we may have breeds where there are differences, but for most, the working dogs far outnumber the show dogs. And then we have the Dual bred dogs, that can (and do) compete for the show ring, and do the field work as well. They are out there, and in large numbers. So for all the poorly bred, poorly designed dogs, there are many out there that are correct.

The idea that mixed breeds are healthier than any pedigree dog is ridiculous, where are the studies that could possibly prove that? If an unhealthy mixed breed has puppies, then somehow miraculously those puppies will not inherit that problem? Who knows what problems the sire or dam have, have their owners had them tested for anything? Doubtful.


Some good things could come out of this show, hopefully anyone considering breeding their dog will find out what problems their breed is known for and will do the proper tests before they have puppies . As always, anyone looking for a purebred registered puppy must do thier homework before purchasing one. Find out what health problems are in that breed, demand that the breeder give you proof that the sire and dam (and hopefully grandparents) have been tested for and are free of those diseases! If they won’t, go find someone who will. We are out there!

I generally cull anonymous posts as noted in the comments instructions, so let me stress AGAIN that people need to READ. Future anonymous posts are likely to hit the trash can very fast. If you really care if your post is seen, you will post an email address in teh body of your comment.

You say "The idea that mixed breeds are healthier than any pedigree dog is ridiculous, where are the studies that could possibly prove that?

Here's a hint: look for the studies. They are NOT hard to find.

For example, you could have read the blog post on survivor rates and disease by breed. See "Dead Dogs Do Tell Tales" at >> http://terriermandotcom.blogspot.com/2008/08/dead-dogs-do-tell-tales.html

Bottom Line: RESEARCH, READ and do not hide behind the cloak of anonymity. The more you are required to defend what you write, the more you will research it, and the more likely you are to be able to play a constructive role in the debate. Who knew truth to suffer in a free and open debate? Not me! That said, I go get tired of answering anonymous folks who say things that *sound* like they might be right because they cannot be bothered with actually "using the Google" and finding REPUTABLE sources.

Patrick, did not mean to post anon.... my name is Bernee Brawn, I breed German Wirehairs and own a Border Terrier. We have emailed before.

The mixes I know and take care of have many of the same problems some of the purebred dogs have. I see it, I deal with it. It runs the gamut from heart problems, skin problems, hip and joint problems. Almost worse is the temperment problems. Some man made, some definitely inherited.

I am on boards for a lot of breeds, from Terriers to herding dogs. I do read!

What this program did was handpick breeds with problems, granted huge problems that need fixing. But there are many many pretty healthy breeds out there. So we can't lump all pure bred dogs into one huge can. Blanket statements tend to turn out all wet.

I am a conscientious breeder who does not, and has not bred a dog with any known genetic diseases. I xray for HD, and test for Thyroid, and am always on the look out for problems arising in my breed.

These are the things I know and what I do. I have purebred, linebred dogs... they live to be 14-16 yrs old.

I would have no problem what so ever if we had to prove both health and working ability before our AKC dogs were bred. In fact, we need to start campaigning for just that.

At this point in the game, it's harder to find a Kennel Club breed that does NOT have an uncommon incidence of a major health problem than it is to find one that is basically as healthy as a mongrel.

For the record, I consider Border terriers pretty healthy, but as you note some lines have heart problems (and epilepsy problems too it should be said), and almost all are now too big to work.

Since the first line of the Border Terrier standard says the dog is "essentially a working terrier," the Kennel Club result (an over large dog) is essentially a mockery of intent. What made the border terrier special -- that it was a working terrier (or could be) -- is now gone in 95 percent of the dogs being bred.

Yes, as you say mutt dogs (or cross breeds if you prefer) have all of the array of genetic issues that you see in Kennel Club dogs, but they do not have the same incidence rate of those defects. In short, you get LESS pathology, on the whole, with non-pedigree dogs, which is why they live longer, are insured for less, etc.

Just as important, however, is that mutt dogs, true working dogs, and non-pedigree dogs (i.e. types) are generally not selected for extreme physical characteristics. With these dogs you tend to lose the smashed face that causes breathing problems, the deeply wrinkled skin and extreme ears that invite infection, the bowed legs that are a sign of dwarfism (which leads to heart and bone problems), etc.

See the lecture from Emma Milne that I put up a few minutes ago on this blog, in which she argues that for MANY breeds, the Kennel Club breeds are selecting for pathology. She is right. And where they are are not selecting for pathology, they often have very small effective populations which results in dogs that are nothing less than cancer bombs, dysplasia veterinary bills on four legs, and heart attacks with fur.

The survey covers a total of 420 dogs, and cancer accounted for 29.6percent of all reported deaths. Of dogs that had a median age of 5, 36 percent "had at least one reported health condition."

Thank you for making this available so early, Patrick. I am slowly downloading it. As you may know John Burchard and Terence Clark were on showing salukis working with hawks, salukis being one of the VERY few breeds still semi- open (though of course some want to change it). Sadly, they were apparently cut to about a half- minute.

Your #5 is a repeat of one of the earlier clips-- can you find the actual 5?

I have linked to this post and the next two. Good work!

Thanks Steve -- fixed that link.

youtube seems to have taken down most if not all of the videos. thank you so much for posting them. i really hope bbc america airs them.

Thanks for the note cvinzant. I have loaded new links to the series and added a one-stop-shop link at the bottom as well.

Thank you for blogging information about this documentary and the scandal it uncovers.

Those innocent victims of irresponsible breeding for profit depend on voices to speak (and scream) on their behalf. Thank you!