The Incredible Shrinking Hogzilla II Is a Pet Pig

Is Hogzilla II a hoax, a tall tale gone out of control, or simple wishful thinking?
To see a larger version of the top two pictures >> Click Here

The folks at NBC News in Oxford, Alabama put up a slide show of what the Stone family says is the skull of their "giant hog."

The last photo in the series shows young Jamison Stone holding the giant pig skull. By clipping that picture and pasting it on another photo of Jamison (wearing the same shirt) that can be found earlier in the series, we can get some sense of scale for the skull.

By comparing the much-circulated picture of Jamison and the "giant hog" with a picture of Jamison holding the hog's skull, we can get some idea of how much "forced perspective" was at work in the original hog photo widely circulated on the internet. The folks at StinkyJournalism.com are clearly right -- this is some type of photographic hoax.

One way to look at the photo is to simply move the pig skull from the right photo to the left and then move it up close to the top of the pig's head (since no animal has very much flesh over the top of its cranium due to the need to cool off the brain quickly when overheated). The gap below the bottom of the jaw bone and the bottom of the photo of the pig's head gives some some idea of the degree of artifice in the photograph. 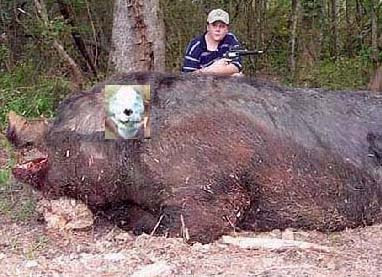 Photo shows real skull of hog properly sized (facing forward) next to pig.
The pig looks so large because the boy is standing many feet
behind the pig -- a type of photographic forced perspective.

Bottom line: This was a big hog, but it was no bigger than any really large farm pig of the type commonly made available (for a price) at other canned hunts. And let's note, once again, that this WAS a canned hunt. The pig, it turns out, was penned in a 150-acre fenced enclosure and it had been trucked in from somewhere else in the not-too-distant past.

Quote of Note from The Los Angeles Times:

Eddy Borden, owner of the spread where the hunt occurred, declined to comment on how the hog got into the 150-acre area where it was killed by Jamison Stone of Pickensville, Ala.

Borden said he was getting tired of questions about the hog, which Jamison's father said weighed 1,051 pounds and measured 9 feet, 4 inches from the tip of its snout to the base of its tail. The kill drew international attention.

"I didn't ask for the publicity. I just want it to all go away," said Borden, whose Lost Creek Plantation is in eastern Alabama.

Woops! A public relations stunt gone bad. Ouch. One thing is for sure: Mr. Borden knows how much he paid for that hog, and that price was based on weight, and there is probably a receipt of sale somewhere. Another thing for sure: that hog was not in that 150-acre pen for very long, as a big hog can wreck a lot of ground pretty quickly. This hog was taken out of this kill pen dead at about the weight he was put in alive.
Hogzilla Update:
OK, it's all over. This was a pet pig, and a hat tip to the always-readable J.R. Absher over at the Outdoor Life Newshound blog who has the full story gleaned from the Anniston Star, the local Alabama newspaper. The long and short of it is that "Fred" was a pet pig and a gentle swine that played with the previous owner's grandchildren. I hate it when I'm right. Honestly, it's a burden.
.

Wow, it certainly does look fishy.... I guess time will tell.

It all does sound a little strange. Check out our Blog for a forced perspective test.
maypearlpipes.blogspot.com

The size seems to have not been altered though, since the previous owner named others' doubts about the size of the pig as his reason for coming forward -- cnn.com: "Phil Blissitt said he became irritated when he learned that some thought the photo of Fred was doctored.

That doesn't take away from the many problems with this (and other) canned hunts.