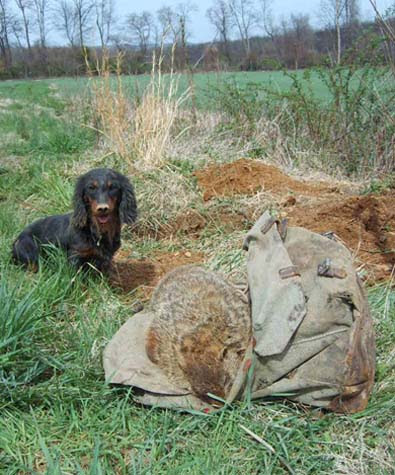 Suli with a Spring groundhog.


Teddy Moritz writes that: "Digging season on the farms has just commenced up here. I'm starting an eighteen month old mini longhair dachshund named Suli. This is the fourth chuck she's seen in the last three days. She's making progress and the farmer is happy. Suli worked rabbits under the hawk all winter but these varmints that bite back are a different quarry."

If you have never seen a working dachshund in the field, you are missing something. They have good noses, loud voices, and chests small enough to get down the hole with ease. Another advantage they have is that they are a little less likely than a terrier to try to wrestle the quarry into submission, which means a dachshund is a little less likely than a terrier to get injured and have to sit out a week or two while things knit up. Since we can dig year round in the U.S., this is no small thing.

It should be noted that working dachshunds are not the ponderous heavy-bodied standard dachshunds most people are familiar with. In fact, to differentiate working dachshunds from their heavy-chested pet- and show-dog cousins, the German word "Teckel" is generally used.

For those interested in working dachshunds in North America, see >> http://www.teckelclub.org/hunting-with-dachs.htm

For those interested in the German or FCI standard for the working Teckel or hunting Dachshund, see >> http://www.fci.be/uploaded_files/148GB99_en.doc (WORD document)

I could not get the German link to work.

My Doxie X out in the field with my farmer neighbors caught and ate
(I have the xray to verify this) 3 Gophers in one day. She was only 12.5 lbs. I did not know your blog then or I would have found a way to work her (but not let her eat so many)

Correct me if I'm wrong, Patrick, but I thought that dachshunds were terriers.

We had a miniature short-haired when I was a kid (named, predictably, Fritz) who hunted rabbits avidly and in summers devoted himself to digging up pocket gophers.

You broach an interestig issue Chas., and one I will try to tackle in the next few days -- what exactly is a terrier? It's actually a little muddier than most folks imagine, as animals called "terriers" are almost pure hound (the Airedale comes to mind) and cannot go to ground, while some dogs that go to ground (like the dachshund) are actually classified as hounds. "Dachshund," for example, literally translates to Badger (dachs) Hound (hund). Adding a wrench into it all, the first book on hunting animals to ground was French and showed small hounds as work, but was translated into English and plagiarized (even the pictures were stolen!) with the word "hound" replaced with the word "terrier" even though the pictures were at odd with the wording.

Hund just means dog in German. Close enough to hound in English for Dachshunds to become hounds instead of just plain badger dogs.

So glad you are touching on a topic that I felt was missing from your book. There are many devotees who work (or would like to work) this breed, that I felt could have benefited from its inclusion.
Obviously, much of the technique would be the same but it would be interesting to hear opinion on the advantages and disadvantages of this "other" terrier!

I've always had jagdterriers but after several years my wife just couldn't deal with the intensity of the dogs( I loved it). Anyway, I purchased a teckel and to my surprise she is a "hunting machine".
Yes, they are great as companions too, as I found out but these little things have major drive.
From my experience the German imported teckels also have more of a heavy boned structure while really athletic. My female has large and extremely strong feet and she is astonishingly fast. Yes, I said fast. She runs with my blue lacys and hangs with them, for a good while anyway.
I personally will always be partial to jagds because they are honestly the highest performing dogs i've ever come across and I hunt hogs.That being said, I am very happy with my teckels blood trailing ability and willingness to hunt( she's also pretty gritty though never even thought of putting her on a hog directly).
These little sausages are no joke.