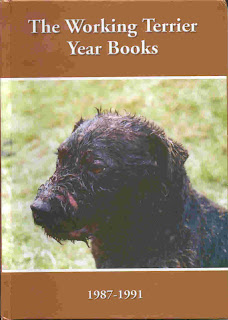 The compilation volume entitled The Working Terrier Year Book, 1987-1991 is a box of small jewels, and a good read for the dedicated working terrier enthusiast.

The book is eclectic and full of short pieces on a wide variety of themes related to working terriers, but if there is a central thread that holds these pearls together, it is that the sand is always slipping steadily through the glass. Some of what what has gone before will never come back, and some of what what exists now may soon be lost forever.

The passage of time is not entirely unexpected as a theme in a Year Book, least of all one on working terriers in the U.K.

It was during during this five-year period, after all, when the political pressures to ban fox hunting really began their ascendency, and when the last vestiges of legal badger work had only recently gone the way of the buggy whip.

At the same time, the push was on to pull the Jack Russell Terrier into the Kennel Club, while some of the legendary greats of the terrier world from the 1940s, 1950s and 1960s, were getting long in the tooth and passing on to the Great Hunting Ground in the sky.

Add to this mix one of the constant beats in the terrier world: the loss of great dogs before their time, coupled with the rise of young know-nothings and fools who continue to give the sport a bad name.

So is the book grim, then?

Suprisingly, not at all, for the central voice is that of the diggers that have endured and will always endure, not the least of whom is editor David Harcombe himself.

A short section bemoaning "Which way for the Jack Russell Terrier?" is also somewhat bemused that otherwise intelligent people are going down the road to Kennel Club oblivion thinking this old road must now lead to somewhere else.

A piece entitled "The Spirit is Willing," is a celebration of an old dog who nearly loses his life due to the mistake of his owner.

A piece entitled "Respect for the Quarry" reminds us all that we safeguard our own self-respect when we treat dogs and wildlife with some reverance.

Again and again in this book we get quick profiles of notable characters, famous names, and unique voices in the world of digging. We also get a regular peppering of concern and amazement about about how terrier work is presented in the press.

I have to say I do not wonder why terrier work is often misrepresented: the world seems to be full of young fools only too happy to do it all wrong and present the ugly side up. This last week, for example, I was rather alarmed to read one person on a semi-public forum who suggested that a ban on fighting dogs was a threat to terrier work (it is not, and to equate the two is pure nonsense and an insult), while on another semi-public board a young digger posted pictures of the ugliest kind of fox culling. Did we need to see that?

Of coure the young who have done very little have to show all they have ever done, no matter how pathetic. And if some people waited for knowledge before they spoke, we would still not know they existed.

As an antidote to the poseurs, this Working Terrier Year Book gives us the varied voices of experience -- of those who observe that a mute dog was never valued in the old days, and who note that a really hard dog cannot stick with it over the several hours (or more) that it may take to dig deep.

My favorite line, is stolen from Napoleon Bonaparte, and is used to describe why show rings are incapable of judging the invisible but not emphemeral, qualities of a true working terrier: "The spirit is to the material as three is to one." Excellent!

And, of course, there are stories of digs and dogs and men. The murky pedigrees of some famous terriers are debated as if they are important, while a well-thought out piece on Jocelyn Lucas wonders whether his dogs were really any good and whether Lucas himself was more of a writer than a digger (good question, good question!) Short profiles are given of such "names" in the world of working terriers as Bert Gripton, Arthur Nixon, John Park, Ken Smith, and Ken Gould.

All in all, this book was an easy and quite enjoyable read, as it presents a varied set of topics in easy-to-digest bits and pieces that are perfect for consumption between coffee and work, dinner and bed. A very worthy addition to any working terrier book collection.