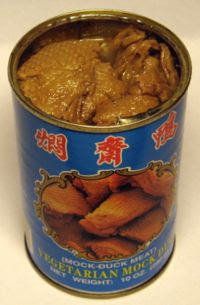 Over at the Pet Connection Blog, Gina Spadafori is reporting some pretty distressing numbers, with more than 3,000 pets already dead due to over 60 million pounds of rat-poison and melamine-contaminated dog food being shipped around the country.

Some reporters seem to have taken to quoting PETA about this dog food tragedy -- never mind that PETA knows nothing about dog food or nutrition, opposes ownership of both pet dogs and working dogs, euthanizes more than 85 percent of the dogs given up to to it, and steals dogs from shelters in order to kill them.

The poor quality of the reporting on this dog food story is amazing. For example, in all of the writing, no one has taken the time to ask a basic question: What the hell is wheat gluten, and why is it in our dog food?

Here's the answer: Wheat gluten is synthetic meat made from processed wheat.

In vegetarian cuisine, this stuff is called Seiten, and if PETA had its way, not only would your dogs and cats be eating nothing else, but so would you.

The picture at the top of this post is a Taiwanese can of "mock duck" made from 100 percent wheat gluten. 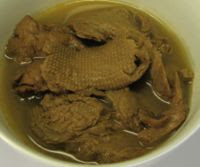 To the right is what the contents of this same can looks like when it is dumped out into a bowl.

Does that look like the "chicken and chunks" you have been serving your pooch?

That's not an accident. Along with "Mock Duck" you can find wheat gluten carefully shaped to look like "mock" beef, mock turkey, and almost anything else.

Wheat gluten is imported from Asia because it is made in massive amounts over there, where is used as an alternative to soy-based meat substitutes such as tofu.

Wheat gluten is cheap and it is a realistic-looking meat substitute. In and of itself, it is not necessarily bad for you, but since most wheat gluten is imported from overseas, almos none of it is inspected by the FDA.

It turns out that folks who thought they were giving their cat or dog "real meat" were -- more often than not -- giving them a little bit of meat and a whole lot of wheat gluten produced overseas by the lowest bidder in a non-FDA-inspected factory.

OK, let's go to a second point: How and when did the dog food companies finally realize that their pet food products really were heavily contaminated by poison?

Early reports from customers were the first sign, of course, but the definitive evidence came from routine "live feed trials."

In a live feed trial, kenneled animals are systematically fed food samples from the production line. When about a third of the cats and dogs in a Menu Foods feed trial subsequently died, that company knew it had a disaster in the making.

What no reporters have mentioned in all their articles about this mess is that PETA is against testing any pet food on any live animals. In fact, in the middle of this pet food recall, PETA actually produced “a list of dog and cat food manufacturers that don’t test on animals.”

Talk about missing the message.

And while we are at it, let's also test prescription drugs and vaccines too. 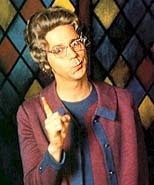 Our children are worth it, and so are we.

As for this dog food mess, let's remember that's while it is primarily caused by poor corporate management, human greed, and an incompetent FDA, you can also find the hand of Seitan at work.

And no one loves Seitan more than PETA.

The point you and others reporting on the issue missed is this: according to Whole Dog Journal -- who know a LOT about animal nutrition -- wheat gluten is a lousy form of protein for animals. I feed my cat no grains at all and my dog gets food with rice and barley only.

I don't feed my dogs wheat gluten. They are rice & lamb fed.

But your post drives another question. Is wheat gluten contaminated in all the 'vegetarian' mock meats sold for human consumption?

Not sure I agree with your idea that this is greed driven, but more likely encouraged by ignorance of consumers who buy lots of gluten based foods for their pets. A company is going to make and market the lowest price product it can sell to max profit. Why would it do otherwise?

Gluten is used in a wide variety of foods. Ask anyone with Celiac Disease and they'll tell you it's a common ingredient. I agree with you that pet food companies cut corners to make higher profits, but your spin is that they're trying to pass off gluten as meat and that gluten itself is dangerous to pets. I just don't think that's the case. Contaminated gluten is the problem here, not gluten itself.

Moreover, you're attack of PETA does your cause no good. PETA is one of the only organizations calling for more regulation and accountability in the pet food industry. Whatever your thoughts of PETA overall, no one can deny this is a good goal.

Wheat gluten is also an appetite stimulant, much like humans find anything wheat-based a comfort food, and leaves us hungry soon after eating it. And this is why it's in the pets food. Sells more.

Same as it's in everything humans eat. Keeps em coming back for more.

They say there's a pet obesity epedemic as well? What - are they spending too much time playing computer games also?

Lord, can't we stop them from putting all this crap in everyone's food?

peta people make love to animals. that is all.

Thanks- I was trying to verify that the Fancy Feast (Chunky Chicken) that the Chinks were in fact the Wheat Gluten. My cat loves the flavor of the Chunky Chicken because unlike the regular Chicken Fancy Feast sells, Chunky Chicken has some FISH which makes it unpassable for my cat.I have been removing most of the chunks(1/2 the can) and she has less wet poop now plus she usually spits the chunks on the floor because they are sometines huge pieces anyway. I get to take out some small slivers of bone now as I sift through the can also that stick to her tongue every 20 cans or so that she tries to use her paw to get off but since their tongues are one way burred to the rear it kind of sucks for her awhile but also keeps her from that food for a few days to a week due to her great memory and bad experience with it.
She gets more KFC crispy breast meat and mild cheddar cheese after that.She would go through 4-5 cans a day of cat food so if I can get her to eat just 2 cans a day for all the added vitamins cats need the KFC doesn't keep her from eating it since she has an eating disorder and loves FOOD all the time. That is what happens when you are a starving STRAY for the first six months of you're life I guess, now she is 18 pounds but happy around food , It is funny - she will run to her food if she gets upset - LOL