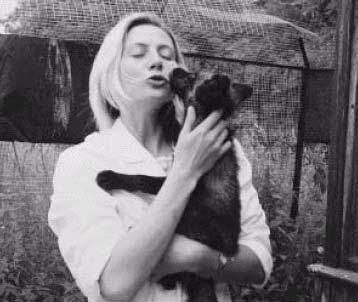 How do you make a dog?

Simple: Just take the calmest most gentle fox you can find, and keep breeding and culling them for 40 years. And Yes, it's been done.

For an easy-to-read version of the story, click here. The original March 1, 1999 article from The American Scientist is here. The authors of this article note that:

"[After] 40 years and 45,000 [fox]... our experiment has achieved an array of concrete results. The most obvious of them is a unique population of 100 foxes (at latest count), each of them the product of between 30 and 35 generations of selection. They are unusual animals, docile, eager to please and unmistakably domesticated. When tested in groups in an enclosure, pups compete for attention, snarling fiercely at one another as they seek the favor of their human handler. Over the years several of our domesticated foxes have escaped from the fur farm for days. All of them eventually returned. Probably they would have been unable to survive in the wild."

As the foxes became tamer, some of their ears flopped (only elephant ears flop in the wild), their tails curved over their back like many domestic dogs (and like the wolf-dogs kepy by the American Indians), the legs got shorter, the heads got wider, their snouts got shorter, their bark became dog-like, and specific color phases occured, such as white added in the head region.

A Footnote: The Russian researchers which had spent 40 years doing this study became a victim of cost cuts after the fall of the Soviet Union, and they were forced to start selling tame foxes as house pets.

For a video version of the story, with Ray Coppinger doing the explaining and Dan Ackroyd doing the narration, see the clip below:

I once spent a day at the home of a Vermont mink farming couple. We were there looking at horses, but we discussed the mink operation, too. This was quite an outfit, the guy would go out and collect downer livestock and bring it home for mink food. He had a contract with the highway dept to collect roadkill. He carried a gun to put the animal down if he had to do that. He told us that he had killed an entire herd of beautiful Arabian horses on the orders of General Patton. The horses had been a gift to Patton. One of them killed Patton's wife in an accident and he ordered them all shot. This mink farmer was a tough old guy. He fed his own horses after they died to the mink. Tough bird.

The couple had first raised foxes for fur and switched to mink. The reason? The fellow got too fond of the foxes and could not continue to do them in. The mink were nasty. He carried a big screwdriver in his pocket in case one of them latched onto him. He could pry the mink off with the screwdriver. He didn't get emotionally attached to such nasty beasts and had no problem when it came time to skin them.

I can see fox becoming dogs in less than 30 generations.

I've written to you before about this article, but I wanted to add the amazing observation that the coat patterns of the more docile foxes started to resemble common patterns found in dogs (think border collie, white blaze between the eyes, collar, socks, etc). This also rendered the fur worthless for fashion.

I believe that was one of the sparks that got the whole thing going. Other animal ranchers who had bred nasty wild animals for fur tried to breed out the nasties to make it easier and they too observed the coat colors going to pot.

Interesting post. I was just reading information on fox color phases, trying to figure out some information on the "silver foxes" I see around my part of Idaho.

I know that the red fox has many color phases. But the story I hear from old timers is that the silver-phase foxes I see are descendants of fur farms that were released by owners when those farms went bust.

From my reading, there is a lot of conflicting information on red fox genetics. Some claim the fox is not even native to the USA--but there is strong evidence that the fox WAS here for thousands of years, just with a very low population.

Clearly, more foxes were brought from Europe for fox hunting, and the species has been moved around quite a bit across the country, also for sport.

I wonder what role fur farm escapes and releases have played in the red fox's spread. The silver-phase animals are quite beautiful; I wonder if they are descendants of captive breeding. I see them fairly frequently here, and have never seen such color phases in other places I have lived.

Then again, I know the "cinnamon" and "brown" phase black bears are quite common in Idaho, but are only found in 1% of the black bears of my home state of PA. Interesting stuff to a wildlife geek...

Great video, I hadn't seen that and I'm glad that you posted it.

I think it's John Lithgow, of "Harry and the Hendersons" fame, doing the voice over though.

I don't think it's the lesser Blues Brother. He's on a mission from gawd.