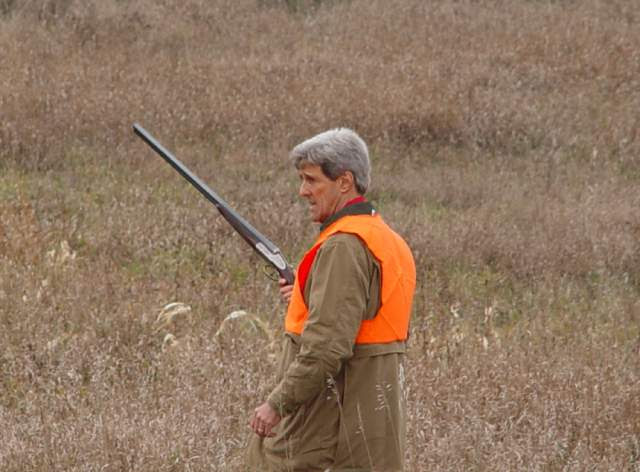 With bird in hand.

"As a life-long hunter and fisherman, I am proud to be among the millions of American sportsmen and sportswomen who are dedicated to conserving fish and wildlife and passing along the American hunting and fishing heritage to the next generation." - Sen. John Kerry

There are no vegans on Mount Rushmore -- but there is Teddy Roosevelt who hunted rats with his terriers in the basement of the White House.

Major on-the-rack magazines and TV shows in the U.S. are devoted to hunting, and several members of the Supreme Court are either hunters or anglers (or both).

Both John Kerry and George W. Bush hunt, while the Congressional Sportsman's Caucus and Foundation are among the most powerful bipartisan groups on Capitol Hill.

Here in Virginia the public decided that hunting, fishing and harvesting game should be considered a right, and that right is now in the State Constitution -- similar language is being embraced in other states. Meanwhile, in West Virginia, the ACLU is suing so people can hunt on Sunday.

Click here to read a well-written study on the economics of hunting packed with solid numbers you can use in debates, letters to the editor, and when teaching others about the economic value of hook-and-bullet conservation.

The simple truth is that hunting and wildlife viewing are worth more to the American economy than many major industries. In fact, economists now recognize that there is no amount of timber that can be extracted from our National Forests that comes close to equaling the value of those forests as recreational centers.

Yet, the U.S. Forest Service continues to LOSE over $1 billion a year selling our timber and our wildlife heritage to for-profit timber companies, even as we taxpayers foot the bill for ripping new roads into wilderness areas.

Why does this travesty continue? Simple: Payola politics. The current head of the U.S. Forest Service is a timber and paper company lobbyist who is setting policy because because a handful of big timber companies slipped over $4 million into the campaign coffers of George W. Bush during the year 2000 election cycle. As a direct result of this kind of "Crony Capitalism," a paper company lobbyist is now in charge of our National Forest system.