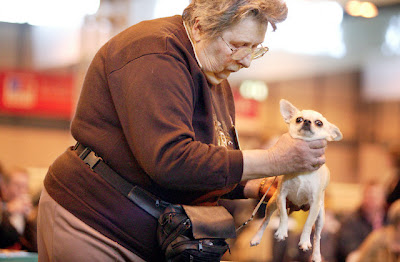 An owner prepares her Chihuahua for the Crufts judges.

Charles Cruft, pictured below, was born in 1852 into a family of jewelers. Charles had no interest in his family's business, and upon graduation from college in 1876, took a job with American James Spratt, who had set up a new venture in Holborn, London selling "dog cakes". 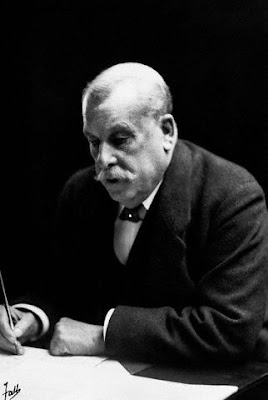 Charles Cruft did not own a dog, but he was an ambitious dog food salesman, and traveled around England and Scotland drumming up business for Spratt. Cruft's travels brought him in contact with large estates, sporting kennels and the first commercial dog breeders in the U.K.

While traveling to Europe in 1878 hawking Spratt's dog biscuits, a group of French dog breeders invited the young Cruft (just two years out of college!) to organize and promote the canine section of the Paris Exhibition, which he did.

Upon returning to England in 1886, Crufts took up the management of the Allied Terrier Club Show at the Royal Aquarium at Westminster, with an eye towards making money.

The first formal "Cruft's Show" was booked into the Royal Agricultural Hall, Islington in 1891. This was the first in a long series of dog shows that Crufts held there, each of them making an appealing profit for Cruft who still did not own a dog himself.

In 1938 Charles Cruft died, still having never owned a dog, and his widow ran the 1939 Crufts Dog Show. Three years later Mrs Cruft felt the responsibility for running the show too demanding and, in order to perpetuate the name of the show her husband had made world famous, she asked the Kennel Club to take it over and it was sold to them.

The 1948 Crufts Dog Show was the first under the Kennel Club auspices.

Now that is a fascinating article! May I have you permission to reprint it in my terrier newsletter? Fascinating and well written..A+