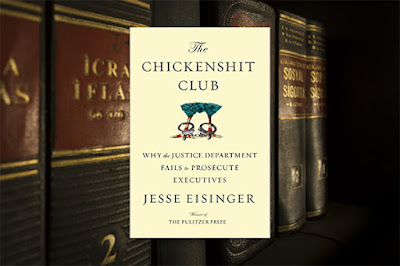 We have a problem, and it’s systemic.
Cops and prosecutors beat up poor defendants — disproportionately black, Hispanic, and immigrant — because they can.
Why?
Simple: Cops and prosecutors are often weak characters with less skill than they claim, and they know it. Because the incentives are calculated as wins to losses, weak law enforcement focuses on those least able to hire competent lawyers and fund appeals.
The result is a massive “chicken shit club” in which both state prosecutors and the Department of Justice give the “big wink” to white collar criminals who can afford to “paper wrench” the system.
Overt criminal actors from Donald Trump to the head of Johnson & Johnson are able to walk away without jail time, shoving money ahead of them as either payment to lawyers, or as fines for malfeasance.

It’s no different within corporations and associations where theft, sexism, racism, and harassment by top executives is papered over by cash payments and nondisclosure agreements that are never reported to stock holders, donors, workers, or members.
Under Trump, the head of the DOJ Civil Division was leading the insurrection.
Right. And where were the DOJ whistleblowers? Cloud-hidden, whereabouts unknown.
And guess why? Simple enough:  the nail that sticks up is the one that gets hammered down.
In the end, a thousand people make a thousand independent decisions, most of them soaked in self-interest and cowardice.
This is the system, and it is self-reinforcing, with the folks at the top making rules for the privileged at the expense of those on the bottom.