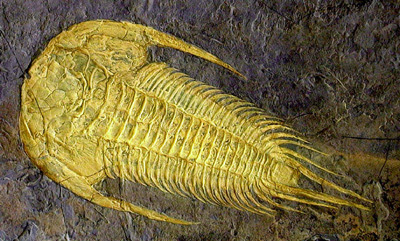 An 1888 New York Times article about groundhogs and shale deposits reminds me that the geology of this part of the U.S. has quite a bit in common with parts of the United Kingdom.

To be sure, a great number of things on the surface are different, but if you scratch below the surface of the soil, you will find "It's a small world after all."

I am not the first person to notice.

As early as the 1860s, scientists in Wales noted that the trilobite known as Paradoxides davidis, occurred in both Wales and the Northeastern seaboard of the U.S. near Newfoundland.

The odd thing -- the "paradox" that gave the Paradoxides genus its name -- was that this shallow water trilobite was separated from its identical brethren by a thousand miles of deep ocean. How could that have occurred?

Paradoxides trilobites were not the only thing that occurred in fossil beds separated by thousands of miles with no connective geological tissue to be found between. How could this have happened?

Around 1915, Alfred Wegener of the University of Marburg in Germany, suggested a bizarre explanation for which he was roundly ridiculed: that the continents drifted around like icebergs on the ocean, with the the lighter granite and dirt of the surface continents slipping and sliding on the harder and denser basalt that lay below.

Wegener was a little vague as to what forces were propelling the continents -- he suggested centrifugal force, or perhaps a lunar pull similar to that which raises the tides. One thing he was certain of, however, was that continents did move about.

In the 1950s, the U.S. began to systematically map the ocean floors incidental to planning for submarine warfare. The systematic mapping of the world's oceans revealed two phenomenon unknown up until that time; the presence of a world-wide system of mid-ocean ridges, and the presence of deep trenches along the edges of what appeared to be geological "plates."

In 1962, U.S. geologist Harry Hammond Hess postulated that sea floors were spread by magma pumped out of mid-ocean ridges, and that a counter-vailing trend was going on in the deep ocean trenches where the earth was being pulled back into the core through a process of subduction.

According to Hess, the earth was essentially on a long slow boil fired by atomic energy being released at the core of the planet, with the continents more-or-less-floating like congealed scum on top of a soup of magma.

With Hamond's explanation and Wegner's theory, the table was set for Dr. J. Tuzo Wilson of the University of Toronto to postulate the unifying theory of Plate Tectonics to explain why parts of the U.K. and North America shared identical fossil beds.

Wilson suggested that the United Kingdom and America had collided into each other some 500 million years ago as the Iapetus Ocean, a precursor to the modern Atlantic, closed up. As a result of that collision, the Appalachian Mountains were pushed up, along with the mountain ranges of Wales and Scotland. Because these mountain ranges are made up, at least in part, by the folded remains of the same strata, they share some of the same characteristics and fossils.

Between 200 and 60 million year ago, however, the continents drifted apart again thanks to the addition of new material from the mid-Atlantic ridge.

So what does this mean for terrier work?

Perhaps not much, but it does suggest things are not so different from one side of "the pond" to the other. That said, while I have moved a lot of crumbled slate and shale while digging on the terriers, I have yet to find a trilobite. Apparently, they are a rare find in the U.K. as well.

What is not rare in my area are groundhog holes with slate and shale-littered spoil piles like the one pictured below. Imagine dozens of these in your farm field, each of them with tunnels beneath, and heavy harvesting equipment driven above. No wonder farmers want groundhogs gone; it's can be a matter of safety as well as commerce.

When folks from England, Wales, Scotland and Ireland came to the U.S., they found a country not all that different from their own, at least geologically. Not for nothing does is "Highland County" Virginia called Highland County!
.
And, as one recent immigrant huntsman to Virginia told The Fauquier Times Democrat, the piedmont area of Virginia is very similar to Shropshire in the English Midlands on the Welsh border. I'll bet he does not know how true that really is! 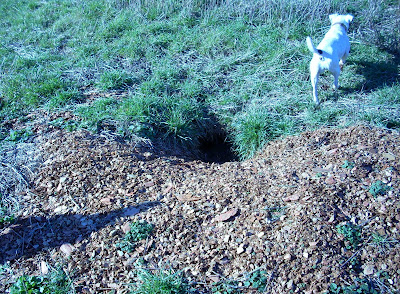 What looks like wood chips is actually shale in various states of degradation.
..

Email ThisBlogThis!Share to TwitterShare to FacebookShare to Pinterest
Labels: geology

If you ever visit Michigan. You find Petoskey stones everywhere. Fossilized remains of many animals. My friends up there would take me to the local lakes and select the stones imprinted with the skeletons of ancient animals. It's a fascinating place to visit. One friend who went to U. of Michigan. Told me of the Biological Research Station that Theodore Roosevelt started in 1904. That he spent on summer at in Pellston, MI at the 'tip of the mitt'. I loved visiting it. I saw an entire tree full of Baltimore Oriels nesting right on the shore of Lake Michigan.