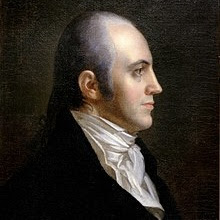 Former vice president Aaron Burr was arrested and indicted for treason in 1807 for betraying American interests to foreign powers for personal gain. He intended to establish an independent country in Louisiana, the Southwestern United States, and parts of Mexico.
This was after he stood in the middle of 5th Avenue (in Weehawken, NJ) and shot somebody (Alexander Hamilton).