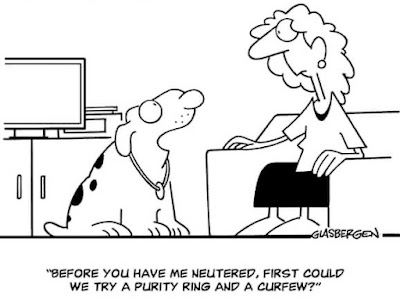 In America family planning is now fully politicized, same as covid, voting, clean water, and basic civility.
Assholes. Yes, we’ve become a country full of assholes. Go figure.
There is no need to enter into the thicket of partisan politics. Suffice it to say that the same racists and fascists who lost the Civil War and cheered for Hitler and Mussolini are now plumping for Putin and spurring on Qontoversy and Qonspiracies of every type.
It’s enough that every reader knows who I am talking about.
This is where we are now.
Earlier this week, a Florida judge decided that a 16-year-old who sought a court waiver to terminate her pregnancy wasn't "mature" enough to receive an abortion, but *is* mature enough to have a baby.
This is where we are now, and never mind that the International Criminal Court lists forced pregnancy as both a crime against humanity and a war crime.
This is where we are now.
What’s this have to do with dogs?
Well dogs and humans, left to their own devices, have astounding levels of fecundity as well as jaw-dropping rates of maternal and neo-natal mortality, to say nothing of behavior problems due to poor and inconsistent parenting.
You want to know why we no longer kill 5 million dogs a year down at the pound?
Simple: spay and neuter laws work. Fewer dogs are born to be abandoned, and more are trained and cared for.
You want to know why violent crime in the US fell by 47% and property crime by 33% from 1998 to 2014?
Simple: legalized abortion meant that 20 years after Roe vs Wade, there were fewer poorly raised 20-year olds. And yes, states with higher abortion rates experienced more dramatic crime declines.
Dogs and people are not so different; it’s why we understand and associate with each other. We’re both social pack predators. And pregnancy is pregnancy.
I am a demographer by training. No demographer is unaware of maternal and neo-natal mortality rates, even if the dangers of pregnancy are never counted by cheerleaders for “accidental” pregnancy (Oops!) in either the world of people or dogs.
The dog breeders who caution against early spay-neuter use the one number they know is wrong (zero) when it comes to maternal and neo-natal mortality and mass killings at the pound due to the predictable consequences of delayed contraception.
On the human side, the cheerleaders for forced pregnancy use the one number they know is wrong (zero) when it comes to maternal and neo-natal mortality, wrecked lives, violent crime, and suicide due to restrictions on family planning.
Want to read more? See >> How Many "Oops" Litters Do You Know About?
Related Posts