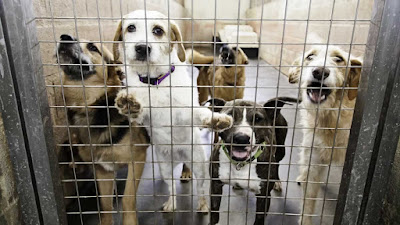 I recently discovered that back in 1973 the inventor of the oral contraceptive pill, Carl Djerassi, also wrote about pet over-population in, all of places, the Bulletin of Atomic Scientists.

In "Planned Parenthood for Pets?" he writes that:

In contrast to the rising concern about the human population explosion, the pet population explosion of dogs and cats has hardly received any attention of the scientific community. Early puberty, large litter size and shorter pregnancies make dogs about 15 times and cats 30 to 45 times as prolific as humans: while approximately 415 human beings are born each hour in the United States, 2,000 to 3,500 dogs and cats are born.


At the time this article was written, about 13 million cats and dogs were killed in local pounds every year -- gassed, shot, drowned, killed with injections, or suffocated.

Read that last sentence again, because this is the number that no one tut-tutting about spay-neuter programs ever talks about.

The absence of spay-neuter programs is not something we have no experience with -- it's the history of several millennia of dead dogs and cats drowned and shot, run over, and dead from disease, starvation, parasites, and injury as they prowled garbage dumps and cemeteries, biting children and terrorizing livestock.

Surgical contraception programs for dogs and cats -- spay and neuter -- were advocated by Djerassi and by animal welfare groups and animal control officers across the U.S.

And they have worked. As Andrew Rowan and Tamara Kartal note in "Dog Population & Dog Sheltering Trends in the United States of America" (2018):

In 1973, The Humane Society of the US (The HSUS) estimated that about 13.5 million animals (64 dogs and cats per 1000 people) were euthanized in the US (about 20% of the pet population) and about 25% of the dog population was still roaming the streets. Intake and euthanasia numbers (national and state level) declined rapidly in the 1970s due to a number of factors, including the implementation of shelter sterilization policies, changes in sterilization practices by private veterinarians and the passage of local ordinances implementing differential licensing fees for intact and sterilized pets. By the mid-1980s, shelter intake had declined by about 50% (The HSUS estimated 7.6–10 million animals euthanized in 1985). Data collected by PetPoint over the past eight years indicate that adoptions increased in the last decade and may have become an additional driver affecting recent euthanasia declines across the US.


So what are the numbers today?  As always, the shelter numbers are soft but the direction, velocity, and relative scale are clear, and the crash in killings over the last ten years (a better than 50 percent decline in the US) has been truly remarkable.

Microchips have resulted in more pets returned, and county-, state- and privately-subsidized spay-neuter programs have made a huge difference, as has a 25 percent rise in adoptions.

A special shout-out to New Jersey which was the first in the country to address its pet overpopulation problem with a statewide low-income, low-cost, spay/neuter program, and which continues to provide these services. The result: the number of dogs impounded in that state dropped by 75% from 1984 to 2014, while the number of dogs euthanized dropped by over 90% over the same period.