Police Dogs Need to be Banned 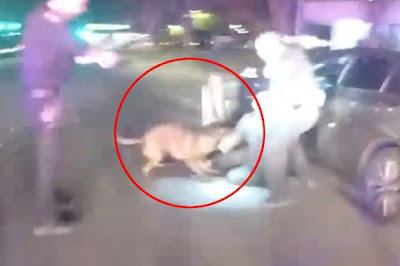 I’ve written before about the fact that police systematically use dogs to savagely maim Black and Hispanic citizens on pretextual stops and for no cause.  This is NOT unusual.
It has to end.
In the era of infrared scopes, beanbag rounds, drones, reliable chemical sniffers, and tasers, dogs are increasingly used ONLY used for pretextual searches and unnecessary violence to the fleeing and unconvicted.
A case in point: an Egyptian immigrant "gig" driver badly mauled by a police dog after missing car rental payments.

Dashboard and body-camera videos obtained by the San Francisco Chronicle show an unresisting Ali Badr wailing in pain, his arm in the teeth of an aggressive San Ramon police dog for more than a minute as officers tried to cuff him.

“I never do nothing,” Badr yelled to officers, the videos show. “I never in my life do anything.”

Badr, a 42-year-old resident of Oakland, has driven for Uber and Lyft and started delivering food for DoorDash when the pandemic hit, the news outlet reported. Forced to give up his own car due to declining income, he agreed to rent a Toyota Camry owned by startup CarMommy, which caters to gig workers, according to the lawsuit.

He told The Chronicle that he fell behind on payments, but told the company he would pay them shortly. It was something he had done before, he said. But CarMommy CEO and cofounder John Blomeke had reported the car stolen, said Matthew Haley, Badr’s attorney, resulting in the car’s license plate number being listed in a state Department of Justice database shared among agencies.

Badr was driving to work at a gas station when the plate triggered one of the city's license plate readers, alerting police of a vehicle reported as stolen. Officers in a half-dozen cars pulled him over, guns drawn and dog barking. He ended up being rushed to the hospital for surgery.

San Ramon Police Chief Craig Stevens told the news outlet in an email that the department conducted an internal investigation into the arrest of Badr, but declined to answer other questions citing the lawsuit.

Badr filed a federal lawsuit last month against the city of San Ramon, its police chief, and several police officers. He is also suing CarMommy, Blomeke, and HyreCar Inc. of Los Angeles, which brokered the rental.

Note that Mr. Badr was not resisting and was surrounded by police and police cars.  Why was the canine even taken out of a car? Simple: police are eager to have their dogs "get in a bite" especially if that bite is against someone who is not white.

Police dogs are incredibly dangerous. I have seen what they call 'training' up close as I live near a state police K9 facility. I have never been impressed by K9 handlers ability to call off a dog engaged in bite or pursuit. I witnessed a completely unprovoked K9 attack outside a bar typically packed with college students. A fight had broken out either inside or near the entrance and police were dispersing a crowd. I saw an unattended dog inside a cop car, window wide open. I was trying to head to my car quickly in a knot of people when I saw that dog, unbidden, launch itself out the window and attack an innocent man right near me. Opened up his leg from groin to almost his knee. Hundreds of stitches and a whopping lawsuit later, that man's leg will never be 100%. NOT ONE cop was able to call that dog off, it took ppl in the crowd bashing it with a garbage can to get it off the man.

This was a town level cop shop, and their K9 'training' consists of a few hours after they get the dog shipped in from Checkoslovakia and a seminar in a hotel conference room 6 months later sans dog. Pathetic. And yes, the man I saw attacked was most definitely dark skinned, poor guy. I have never seen a dog handler (and I've handled dogs for thirty years, rescues, racing greys, fosters) so woefully underprepared to handle a weaponized dog in my life. Steer far clear of ALL cop K9 'teams'.