MLK and America's Dogs of Oppression

Fifty years ago today, Martin Luther King was assassinated by a career criminal and white supremacist who had escaped from jail the year before.  James Earl Ray bought a Remington 30-06 the week before the assassination, paying cash and without a criminal background check or waiting period of any kind.

The day before he was assassinated Martin Luther King had delivered his last speech, the Up to the Mountain speech which, in hindsight, seemed laden with foreshadowing:

Well, I don't know what will happen now. We've got some difficult days ahead. But it really doesn't matter with me now, because I've been to the mountaintop.

And I don't mind.

Like anybody, I would like to live a long life. Longevity has its place. But I'm not concerned about that now. I just want to do God's will. And He's allowed me to go up to the mountain. And I've looked over. And I've seen the Promised Land. I may not get there with you. But I want you to know tonight, that we, as a people, will get to the promised land!

And so I'm happy, tonight.

I'm not worried about anything.

I'm not fearing any man!

Mine eyes have seen the glory of the coming of the Lord!!


By Martin was not focused on dying that day. He was focused on freedom and the terrifying gauntlet that America makes people run if they wish to make history.

All we say to America is, "Be true to what you said on paper."


We aren't going to let dogs or water hoses turn us around.

Martin mentioned America's dogs of oppression three times in his last speech. It was not a metaphor; there were real dogs. 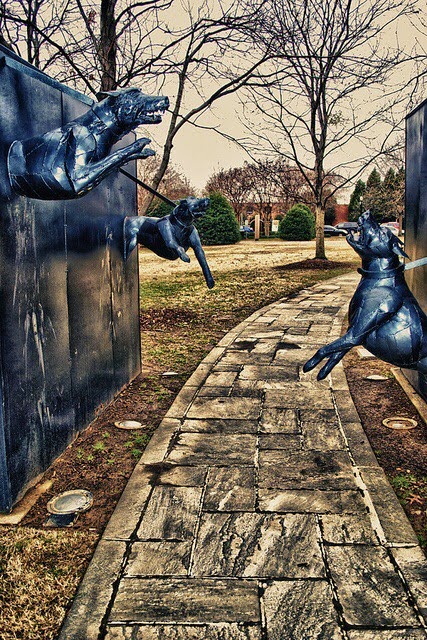 This is the Kelly Ingram park in Birmingham, Alabama which is located across the street from the 16th Street Baptist Church which was bombed by racists in September of 1963, sending four young school girls to their death. 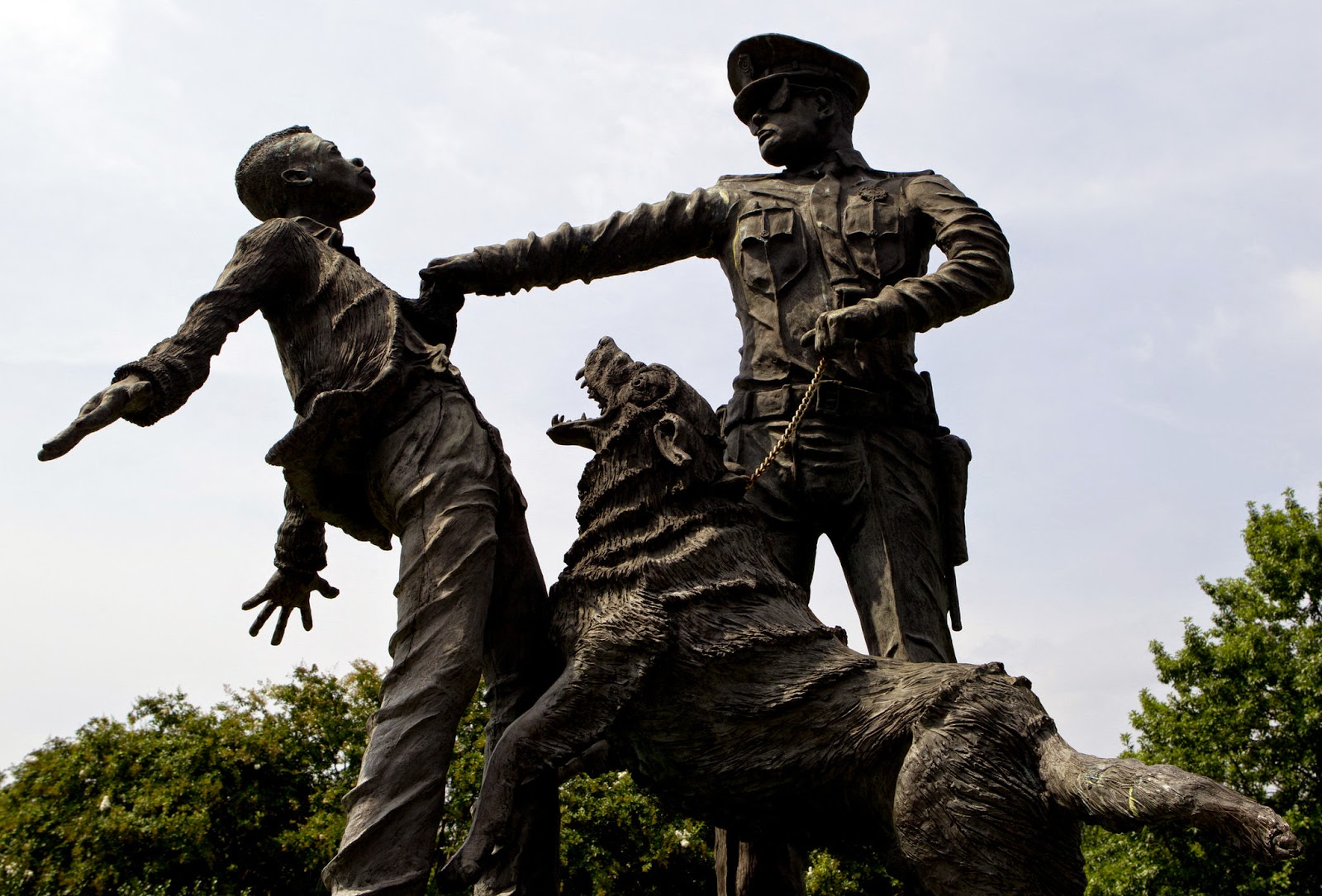 Think about these sculptures for a minute -- and about the role of dogs in police oppression and violence against citizens the world over.

In the hands of police, the use of dogs to oppress and intimidate people is far more common than their use as tools to catch criminals or even locate the lost. The good news is that in an era of police helicopters, bean-bag rounds, and thermal imaging, catch dogs are bringing less and less to the law enforcement table.

The inscription on the statue, above, reads:

This sculpture is dedicated to the foot soldiers of the Birmingham Civil Rights movement.

With gallantry, courage, and great bravery they faced the violence of attack dogs, high powered water hoses, and bombings. They were the fodder in the advance against injustice. Warriors of a just cause; they represent humanity unshaken in their firm belief in their nation's commitment to liberty and justice for all.

We salute these men and women who were the soldiers of this great cause.


And yes, what is depicted here happened all the time and was repeatedly photographed. The whole world was watching and the actions of these police officers are framed forever.

In the U.S., about 2,000 law enforcement agencies have K-9 dog units, but the level of training of both dogs and people is very uneven, and as a consequence handlers and innocent civilians are routinely bitten, driving up liability costs for all taxpayers.

Studies have shown that law enforcement dogs are disproportionately used in inner-city communities, and of course dogs have been used in the torture and intimidation of prisoners, by both the U.S. and other countries, for more than 100 years.

The use of dogs by civilian police forces in the U.S. is in need of a long overdue examination.

For example, in Ferguson, Missouri, the center of a great deal of animosity and controversy a few years back, we find, according to the most recent Department of Justice report, that the use of police attack dogs was “part of a pattern of excessive force in violation of the Fourth Amendment,” that dog bites were exclusively inflicted on African-Americans, and that the police “appear to use canines not to counter a physical threat but to inflict punishment.“

Of course, any tool is subject to abuse. That said, some tools are simply more expensive and riskier than they need to be. Do police dogs too often fall into that category? Has the rise of alternative methods and technologies changed the cost-benefit equation?  Did the equation ever really balance?

The use of dogs to conquer and oppress has a very long and brutal history. See, eg.,

Dogs were also important as enforcers of slavery in the USA
https://sniffingthepast.wordpress.com/2012/02/23/slavery-and-dogs-in-the-antebellum-south/