The Grievance and Racism Party 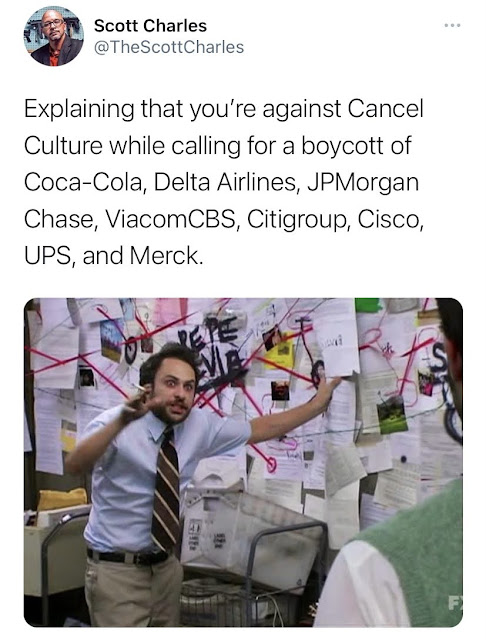 At this point, the RepubliQons stand for nothing but racism.

Not fiscal austerity (no one has ramped up more debt for less);

Not personal integrity (no one has lied more, stolen more, or grifted harder);

Not family values (they are the party of wife-cheating and pussy-grabbing);

Not right to life (they literally race to kill prisoners in the electric chair);

Not personal responsibility (refusing to wear masks, maintain distance, and not gather in rallies);

Not opposition to government bailouts (they supported every corporate bailout);

Not support for veterans (who have been mocked and had their benefits slashed).
Racism, and racism alone is the only plank in the RepubliQon Party platform.

It’s why they oppose Colin Kaepernick taking a knee, and why they rally to support officer Derek Chauvin kneeling on George Floyd’s neck until dead.

It’s why they invented the “voter fraud” lie and then moved to close voting locations in black and Hispanic neighborhoods while stripping mail-in voting, Sunday voting, and ballot boxes, while shortening voting hours.

It’s why they oppose a higher minimum wage for those on the bottom of the economic ladder.

It’s why they are obsessed with the slogan “Black Lives Matter,” even as they ignore the organized violence and planned murders by Oath Keeps, Proud Boys, Boogaloo Boys, Nazis, and white supremacist gangs masquerading as “militias”.

It’s why they are hyper-focused on blue collar crime (even though it’s been declining for 40 years), even as they give the Big Wink to billion dollar thefts by hedge funds and corporations, while ignoring massive tax cheats, insider trading, and charity thefts from their own leadership.
Racism, and racism alone is now the primary organizing tool of the RepubliQon Party. It’s their core identity.

It’s why people fly the Trump and confederate flags;

It’s why they fly the fascist “thin blue line” flag;

It’s why they foment “culture wars” targeting blacks and Hispanics, especially picking fights with minority women whose strength seems to be particularly scary.
RepubliQons are not “tired” of being called racist — they glory in it, and continue to invent new ways to operationalize resentment and hate in general, and racism in particular. To that end, they have manufactured one grievance and fake fear after another, from “reverse discrimination” to gay marriage, from coed bathrooms to transgender girls in sports, from “welfare queens” to “reefer madness”. The RepubliQons are aggrieved victims, don’t you know? The reason they are not living large on a sack of cash is not that they have acquiesced to a real-world decline in wages, job security, retirement security, and infrastructure investment, but because some “minority” somewhere is no longer living with a boot placed as firmly on its neck as it once was.
The RepubliQons want that boot placed back on that neck.
That’s their entire platform. That’s their grievance and their identity.

Well said. It's so very sad because I remember 'fiscally conservative' republicans or 'Rockefeller' republicans back when they were a force in their party. They provided a good counter-balance. It's why so many 'blue' states tended to have republican governors. Now they stand for only one thing, as you catalogue here, it's racism pure and simple. I will never vote R for any office, not even dog catcher. I couldn't believe it when Reagan used to go on about the worst thing to hear: 'I'm from the gov't and I'm here to help' nonsense. Why run for office then? If you hate gov't so much? Trust me I know a lot of deep red folks who are happy to get the help from FEMA when their property floods. Or the farm subsidies, they put their hands out for those, no problem. That's different, they say, I deserve it. THOSE people don't. All the party has now is hate for the other. And hate buys votes and social media clicks faster than anything. They are in their death throes and they very well know it, so they aren't even bothering to put a fig leaf on their voter suppression. They just straight up tell judges if they don't make it harder to vote, they'll lose. The kids are onto them, though, the generations coming up won't believe their lies so easily.