Time to Shoot the Dog 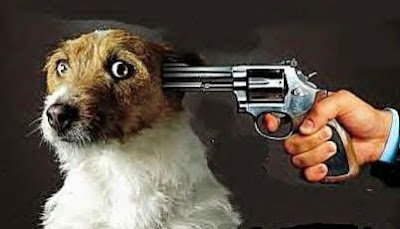 A few words about the fascist rioting by Q-Anon and racist insurrectionists in Washington, D.C. yesterday.
If you think this is over, you’re NUTS.
These racist, fascist Trumpers said they would be back on the 19th, and armed.
This was not a take over — this was a RECON for what’s next.

Trump needs to be IMPEACHED or taken out of office with the 25th AMENDMENT, citing mental illness.

The Q-Anon and Proud Boys need to be jailed, and Breitbart closed.

The Virginia and Maryland National Guard need to be detailed to Washington for 10 days surrounding the inauguration.
To be clear, the problems we have with white racists in this country is a failure of PUNISHMENT.
Instead of jailing and hanging traitors and insurrectionists in 1865, at the end of the Civil War, we jailed no one.
The same occurred for the next 125 years as racists used police fascism to enforce Jim Crow laws and as police actively winked at lynchings and cross burnings, while manufacturing crimes and escalating confrontations with people of color.
Cops were never punished and Klansmen were almost never jailed.
What’s this have to do with dogs — the topic of this page?
Quite a lot.
Training is going on all around us all the time.
So too is bad behavior.
Most of the time, however, bad behavior is put in check, not by rewards but by aversive consequences.
Two men raining blows on each other will stop fighting pretty quickly once the police come, and they will not be quick to fight again after the police haul them to the station, book them, and they have to explain to their spouse, children, and boss why they have to go to court, pay a fine, and spend three weeks in jail.
No policeman ever said: "We have to know why they are fighting in order to change their behavior"
No policeman ever said: "It will take a long time to teach them not to fight."
Police and the criminal justice systems know something; Fighting is a self-rewarding behavior.
Sometimes it feels good to get the adrenaline up and pop someone in the nose.
The Proud Boys and Q-Anon yahoos are mostly in this to feel important and to swagger with impunity.
The impunity is the problem.
Most of us color within the lines of civility because time and experience has shown us that staying calm, engaging in rational discussion, and walking away when mad results in a better long-term outcome almost every time.
When did we learn that? Was it second grade when we were pulled down to the principals office and our parents were mortified because we were suspended for a day?
That didn't take? Then the penalties got higher until they did. How much do you want to lose? Your allowance? The car? Your freedom? Your job? Your future?
\
Our entire legal system swings on penalties to stop self-rewarding behavior, whether they are penalties for simple assault or robbery, sexual assault or embezzlement.
Why is our legal system focused on penalties?
Because they work.
Rewards are great for encouraging people to show up early, study hard, and help paint the gym, but none of those behaviors are internally self-rewarding, which is why they have to be externally self-rewarding.
How do you stop internally self-rewarding behavior, and how do you stop it pretty damn quick?
Punishment. The "P" word.
And does punishment work?
Like new money.
So, to bring it back to the craziness and violence in Washington: all of it is due to lack of punishment.
Senator Susan Collins said she thought Donald Trump “learned his lesson” when he was impeached by the House but not convicted by the Senate.
Trump DID learn a lesson, but not the one Susan Collins imagined.
He learned he could engage in treason and open theft without consequence.
He learned that the politicians and the press corps are confused, divided, tentative, and WEAK.
So how do we fix things now?
We shoot the dog
What’s needed now — TODAY — is for Nancy Pelosi to begin impeachment proceedings and for Pence and eight cabinet officers to invoke the 25th Amendment.
Shoot the dog.
The FBI and local police around the country need to publicly and RAPIDLY arrest and jail every person they can identify storming the Capitol.
Shoot the dog.
Breitbart and dozens of insurrectionist and conspiracy web sites need to be shut down and taken off line.
\
Shoot the dog.
Senators Cruz and Hawley need to be censured along with the other four that led the insurrection.
Shoot the dog.
Capitol Police Chief Steven Sund must resign or be fired today, and every police officer seen opening gates or taking selfies with the rioters should be terminated for cause.
Shoot the dog.
Every advertiser on Fox News needs to pull their spots.
Shoot the dog.
At this point, nothing else will work.
You don’t “click and treat” when the pit bull is coming up your arm. You shoot the dog.

Well written, thank you. I still cannot get over the difference in response to peaceful black lives matter and women's march protestors, and this. I will always maintain that had those insurrectionists in the Capitol building been people of color, the response by law enforcement would have been vastly different. It would have been stopped much more quickly and violently. One white woman traitor even yelled, 'You're supposed to shoot BLM protestors, not us!' White people have always gotten away with more violence in this country, they fully well know it, and it's got to be stopped. Yes, indeed it must be punished swiftly and decisively. Otherwise, they get more and more emboldened and we have seen the results. I wholeheartedly agree with you that they've been trained, encouraged by lack of consequences and punishment.
The white supremacist dog needs to be shot. Now. Once and for all.

I read that acting US Attorney Michael Sherwin is in charge of the prosecution. He seems to be in Trump's camp.