A Short History of Vaccines 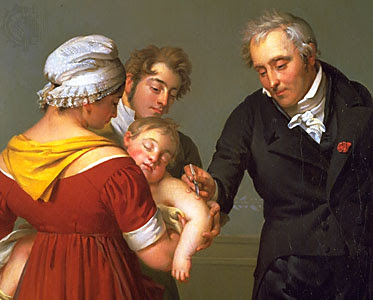 The idea of vaccinations to prevent disease dates back to 1796. In that year Edward Jenner, a British physician, noted that dairymaids who had caught cowpox (a minor disease), could not catch smallpox (an often fatal disease in humans).

Jenner took infected matter from the hand of Sarah Nelmes, a local dairymaid who had become infected with cowpox, and inserted this ooze into the cut arm of James Phipps, a healthy eight-year-old boy. The boy then caught cowpox.

Forty-eight days later Jenner injected smallpox matter into the boy. Miraculously, it had no effect. This was the first recorded vaccination.

The term "vaccine" is a reference to the origin of vaccination. "Vacca" is the Latin word for cow.

The term "vaccination" is now generalized to refer to any germ, disease, or injection given to people to prevent a more serious disease from striking the individual.

A few key dates in the history of vaccination:

It was not until after World War II that a reliable vaccine for distemper was developed and made available to the public. Prior to this time, distemper would sweep through breeding kennels and wipe out litter after litter of puppies.

Ironically, one way distemper got into the kennels was through dog shows, where judges and spectators would transmit the virus from one dog to another as they moved through the show petting puppies and adult dogs alike.

Hello. I was glad to see this entry on vaccinations as everyone is gearing up to take flu shots. I subscribe to Dr. Mercola's Newsletter which has had quite a bit on the vaccination controversy. I was curious about your opinion of flu vaccinations. Here is one recent article from Dr. Mercola -
http://articles.mercola.com/sites/articles/archive/2009/09/19/Inconvenient-Truths-About-Gardasil-and-Swine-Flu-Vaccines.aspx You always make me think a bit further. Thanks.
Mary P. Neck, Houston, Texas

No vaccine is risk-free, but most human vaccines are worth the risk.

I am getting BOTH the regular flu shot and the swine flue shot, for what it's worth, as the incidence of both is very high.

The Gardasil shot is a little less clear to me, and I will punt and say I have no opinion. It was sold very energetically, I will say that.

The small chance of an adverse reaction to a vaccine (and the nature of that adverse reaction) has to be weighted against the chance of getting that disease and the damage it can do, and the difficulty of treating the disease after the fact. Every vaccine, in short is a weights game, and vaccine makers have no reason to do anything but sell their product.
On the other side of the coin, there is a lot of fomented paranoia and crackpot demonization of vaccines, which I do NOT subscribe to. Vaccines are probably the greates public health leap forward ever -- maybe even bigger than sewage systems and chlorinated water.

A great book on the subject especially for dog people is "Rabid: A Cultural History of the World's Most Diabolical Virus" by Wasik and Murphy. It describes the history and cultural ramifications of rabies and its cure by Pateur. It's written like a potboiler novel- very good!

I've read that one!