Back in 2008, I noted that Ron Menaker, Chairman of the AKC, was worried about the 20-year collapse in AKC registrations.  In his Chairman's report to the AKC board, he noted:

“If the current trend continues and dog registrations decline to 250,000 over the next several years, AKC will face an annual revenue shortfall of $40 million. To put this in perspective, if this scenario occurred, and we relied solely on raising the event service fees to make up for this revenue shortfall, the fee would be a staggering $20 per entry.”


Right.  Boost entry fees, because collapsing AKC registrations is only a revenue problem, not a problem that reflects a fundamental change in how Americans see dogs and themselves, or a rejection of the sick and inbred animals that are selected for defect and  celebrated by the AKC.

Over at The Canine Chronicle, the web site of the show dog set, Lisa Dubé Forman notes that

In fact, I have been told privately that AKC registrations have now fallen below 500,000.

But is that fact being shared widely with the show dog set?

Nor is the data being presented in an honest fashion.  As John Mandeville notes in the March 30, 2012 issue of Dog News: 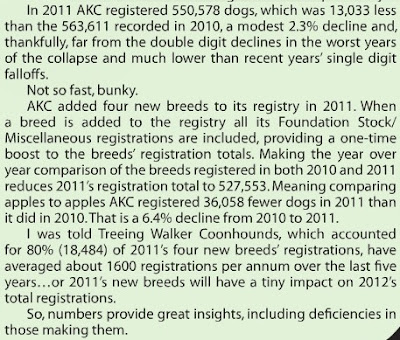 The AKC continues to add new breeds in order to shovel sand against the tide, but still the overall numbers fall, and at a precipitous rate.

When new breeds enter the AKC, their gene pools are often small and that gene pool is further reduced through sire selection.  What follows next is as predictable as gravity: increased rates of disease, and eventually a serious health disorder named after the breed itself.  As I noted on this blog back in 2006:

And yet inbreeding is not an option with the Kennel Club -- it is required. The option of outcrossing a Lakeland Terrier to a Fox Terrier is not possible within the confines of a closed registry, nor is the crossing of a Curly-coated retriever to a Flat-coated Retriever, or a Greyhound to a Saluki.

Along with an increase in the incidence of serious genetic problems within a closed-registry population, you have other problems that may not be clear to an individual pet owner, but which become obvious to those studying canine demographics: increased neo-natal mortality, shortened lifespans, and increased infecundity (dogs that are sterile or barren). All of these characteristics are endemic to deeply inbred populations, and are showing up with increased frequency in the Kennel Club.


Of course, as I have observed in the past, the AKC cannot easily change its ways and, as a result, is more likely to go extinct than to embrace reform:

Why then has the Kennel Club not changed its policy?

The short answer is economics.

The Kennel Club is a huge money-making bureaucracy dependent upon selling people on the "exclusivity" of a closed registry and a scrap of paper that says a dog is a "pure breed". So long as people are willing to buy Kennel Club registered dogs that have predictably higher chances of serious physical impairments than cross-bred dogs, the Kennel Club (and Kennel Club breeders) have little motivation to change the way they do business.

Let me hasten to say that the Kennel Club is not filled with evil people intent on doing harm to dogs. It is, in fact, filled with regular people who are different from the rest of the world only in the degree (and the way) they seek ego-gratification and are status-seeking.

This last point is import: the Kennel Club is not primarily about dogs. Dogs do not care about ribbons, pedigrees, titles, and points. These are human obsessions. The reason a human will drive several hundred miles and stand around all day waiting for 10 minutes in the ring is not because of the dog, but because the human needs that ribbon, that title, and that little bit of extra status that comes from a win.


Unwittingly adding sauce to this line of thinking is Lisa Dubé Forman over at The Canine Chronicle who does not suggest that the AKC could produce healthier dogs, but instead suggests the AKC could change its shows in a way that would result in twice as many ribbons being handed out!

Well yes, they could do that, and I actually do salute the notion of getting rid of professional handlers.

And, of course, if things keep going as they are, that is exactly where the AKC will be as well, and I can hardly wait.  Every dinosaur has its day, and at the AKC that day is approaching with speed!
.

Some of the slowness of the AKC decline can be attributed to the media who, every year, fail to see what's in front of their eyes at the Westminster KC Dog show. It's easier to make stupid puns Dog-gone it!

They also made the Canine Good Citizen a title for your dog. Costs more, of course.

Which AKC breed has a gene pool so small that INBREEDING is required? Breeding father-daughter or brother-sister is certainly not a typical breeding among reputable breeders. Line breeding is much more common - breeding distant cousins, or something similar. Outcrossing, breeding two relatively unrelated dogs of the same breed, is also a common practice I see. While I agree many competitors are ego-driven and the dogs don't care about ribbons, but they do care about spending time with their owners and enjoy their time in the ring strutting their stuff. Perfect example is Joe, the Westminster winner, who adores his handlers Ernesto and Carlos!

rjrkpt (your mother named you that?):

I assume you are new to dogs and do not know the actual size that the AKC and the Kennel Club typically close their registries?

That's worth looking up! Start with your own breed and then pick any five others.

I would not get too wrapped up around the word "line breeding."

Line breeding IS inbreeding or, as we used to say, "your enemies inbreed, your friends line-breed." Right!

The short story with Kennel Club dogs is that most dog breeds have had their registries closed with fewer than 50 individuals, and the effective populatioln size over several generations is often far less. There is lots of stuff written on this, including the study you can find at this post >> http://terriermandotcom.blogspot.com/2008/08/inbreeding-of-kennel-club-dogs-data.html

If you want to see a recent and well-documented case of forced inbreeding, see the story of the Basenji here >> http://terriermandotcom.blogspot.com/2010/06/what-hell-is-congo-terrier.html and note the numbers on the "back to Africa" outcross.

Or, to pick a recent entry to the AKC, look at the Dogue du Bordeaux. Wow.

The Cavalier King Charles Spaniel, of course, was a dog created at Crufts based on a sample size of one. See that story here >> http://terriermandotcom.blogspot.com/2008/05/basketcase-cavalier-king-charles.html

Unfortunately...the Westminster BIS winner is a result of father/daughter breeding.. and was bred in the Netherlands...:-(