Working Terriers at the Tar Pit 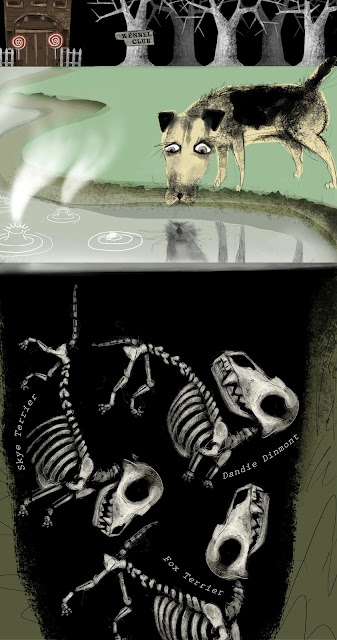 The article, below, is my submission for the June issue of Dogs Today.
The art by the always wonderful Kevin Brockbank
It seems that most dog owners want “their” breed to be of an ancient and storied lineage, and never mind if that’s actually true. In the rush to embrace contrived histories, however, the true story of breeds is often obscured, and with it a tale of canine caution.
The story could be told with almost any type of dog, but terriers will do. In the last 150 years, British working terriers have been schismed and morphed into a variety of dogs variously called Fox, Jack Russell, Parson Russell, Border, Lakeland, and Welsh terriers.
Terriers, of course, go back several hundred years. Since the beginning, they have come in a variety of sizes, shapes, and coat colors. Most were farm and family pets of no purpose. Others served as all-purpose ratters, bushing dogs, cart guardians, or turnspit dogs.

The true working terrier, however, is a dog that goes to ground on fox or badger. Though a dachshund-like version of these dogs is mentioned as early as 1500, the true advent of working terriers began with mounted hunts at the end of the 18th Century.

The first discernible ”breed” of working terrier was the Fox Terrier. A predominantly white dog, it came in rough, broken and smooth coats. Alongside this dog, there have always been various types of colored dogs, now called “fell” types.

Working terriers of all colors have always been judged on the quality of their work. Though a dog may be called a “Jack Russell” if it is predominantly white, or a “Border” if if is grizzle, or a “Patterdale” if it is black, this is a gauze-thin classification system.

Digging dogs are best evaluated through the color-blind eye of the fox which, in the darkness of the den pipe, only cares if the dog has found, if it can reach, if it will bay, and if it has the heart to stay when its adversary puts in a tooth.

With the start of dog shows in 1859, however, the world of working terriers took a hind leg to appearance. By 1900, the working Fox Terrier had been “improved” to the point it was nearly useless in the field, and digging men were now advertising “Jack Russell” terriers to signal that their stock had nothing to do with show ring failures.

The colored working terriers were also being gussied up for the show ring, but here, where there had once been a single broad type, three different breeds were now forming.

First up was a dog initially called the “Old English Black and Tan” terrier. But the dog was not English at all, was it? No, it was Welsh, and after howls of protest the terrier was renamed.

Next up was the Border terrier which was added to the Kennel Club’s fold in 1920, after nearly three decades of dog dealers pounding on the door for its entrance.

Why was the Kennel Club slow to admit this breed? A big issue was that the old working “Borders” were not very uniform in appearance. In order to be admitted, working Borders had to be “improved” so that they could hunt rosettes, and never mind if they never hunted fox again.

The Lakeland was added to the Kennel Club’s roles in the mid 1930s, but in truth it was not much of an addition. The visual standard for the dog can best be summarized as being “exactly like a Welsh terrier, but lighter in color.”

When working dogs began to be selected for appearance rather than work, they got less steady in the field until at last they passed a tipping point where no knowledgable working man would take the risk of investing two years bringing on a dog with a higher-than-necessary risk of failure.

A good example can be seen with the Border terrier. Now a Top Ten breed in the U.K., it’s almost impossible to find a registered Border terrier working in the field, and never mind if the Chairman of the Kennel Club’s family goes back three generations as breeders!


The Tar Pit Ahead

So where are we now? What trouble lies ahead?

As always, the threat to working dogs is the tar pit of the Kennel Club from which no breed has ever emerged intact and still working.

Tar pits look benign -- cool water tends to pool on top -- but nothing has ever come out of them but bones.

In the case of the Kennel Club, what has emerged, time and time again, are exaggerated dogs devoid of working instinct, nose, and common sense, with coats inappropriate for the job, and skeletal structures that are often inadequate for a day in the field.

No one who courses dogs looks to a Kennel Club dog to do the job, and the same is true for working sled dogs, herding dogs, cart dogs, pointers, setters, or retrievers.

Terriers are not an exception to the rule.

The answer is to be found in an inherent defect of the show ring, and a basic understanding of canine anatomy.

The essential elements of a working terrier are small chest size, a strong prey-drive, a loud voice, a sensitive nose, and a clever kind of problem-solving intelligence. Aside from size, none of these attributes can be judged at ringside.

In a judging field of 20 or 30 dogs, a selection filter of size alone does not provide the gradients required to articulate a reason for choosing a single dog or bitch as a winner. The breed club solution has been to generate pages of cosmetic criteria which effectively devalue the only important attribute of a working terrier that can be judged in the ring — a small chest.

Another factor is that in the Kennel Club, head size and shape are deemed to be very important by theorists who assign a great number of points to this feature. It is head shape, after all, that gives each breed its distinctive look. It is the head that faces the quarry in the hole. Surely the shape and size of a terrier's head is important?

In fact, when it comes to working terriers, head shape is only important to the extent that it leaves space for brains, produces a strong enough jaw to grip, and allows for unobstructed breathing. Most crossbred mongrel terriers have heads shaped well enough to do the job.

In the world of working terriers, a bigger head is not necessarily better. Larger heads tend to be attached to larger chests — the latter being necessary to support the former. When terriers are bred for the kind of “strong heads" that Kennel Club judges favor, the resulting dog is often large-chested as well.


The Kennel Club has not been content with merely drawing the Fox terrier into the tar pit. Now they have drawn in the Jack Russell under the name of the “Parson Russell” terrier. Already the dogs are getting too large and the coats too linty. Every year fewer registered dogs of this breed are found in the field. Georges Santayana was not wrong when he said “those who do not learn the lessons of history are doomed to repeat them”!
Of course Jack Russells can still be found working and work free of the Kennel Club system. Fell terriers exist as working dogs unencumbered by a show ring standard.
I would raise a caution flag, however when it comes to the hard-working little dog called the Patterdale terrier. At some point in the not-too-distant future, the Kennel Club is likely to reach out for this breed. It takes only a handful of pretenders and dog dealers to make a breed club under whose auspices the Kennel Club can raise its flag.
Will the Patterdale terrier be the next breed to disappear into the Kennel Club’s tar pit? Time will tell. One things for sure, is that the Kennel Club tar pit is cunning and powerful.  Above all, however, it is patient.
.

Another superior illustration to accompany another informative article!

Kevin Brockbank does amazing work, doesn't he? I will post a profile on him -- a fireman believe it or not, and a master artist on top. When the world turns to cloning, it's his cells they'll be coming for, not mine!

His work is an amazing combination of whimsey and serious intent, rolled into one.

Don't worry about "the world coming" for you, or him, since we only have three days left before The Rapture. ENJOY!