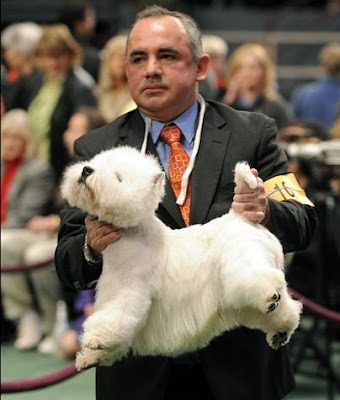 Dogs shows are not about dogs -- they are about human ego.

Lucy Siegle has a very nice piece in The Guardian in which she notes that "Pedigree dogs are often born with chronic levels of inbreeding. Until someone takes a lead, rehome one":

Posing with a puppy is in many ways the celebrity equivalent of a politician kissing baby. Cue Victoria Beckham holding a Retriever puppy aloft in a photo shoot, apparently to signify her soft and cuddly side. As I'd just read a Dogs Trust report on battery-farmed canines, all I wondered about was the puppy's provenance. An estimated 900,000 of us bought our dogs via the internet, a pet retailer or a newspaper advert, often collecting it on "neutral ground" rather than making a visit to see where it was raised, which could mean it originated from a puppy farm....

... And this nation of dog lovers bypasses the thousands of existing dogs waiting to be rehomed because we love pedigree puppies and their characteristics of determined inbreeding, be they excessive folds of skin or snubbed noses. In an effort to meet the bonkers "extreme confirmation" demanded by some pedigree proponents, some breeders even mate mother and son. The result is an ever-declining gene pool, "comparable to that of rare endangered animal species", according to Dr Hellmuth Wachtel, an expert in canine genetics. Other studies show an increase in debilitating inherited illnesses in many pedigree dogs, especially Golden Retrievers (take note, VB).

... [D]on't take ... the fact that next month's Crufts is back on TV, with a different broadcaster – as a green light to go get a pedigree pup. Until the industry acts decisively, the dog days are far from over.

The good news is that the message has already gone out here in the U.S., and has been in play for more than a decade and a half now.

In the last 15 years, AKC registrations have declined 55% while shelter adoptions have increased even more than that.

Of course, we still have problems.

In a word, the problem is Pit Bulls.

For more on that, read "Is 400 Million Pounds of Dead Pit Bull Enough?" -- an earlier post on this blog.

If you're counting shelter adoptions of older dogs (not just puppies) you might well be counting some purebred dogs twice. People ignorant enough to buy a puppy mill pup are also probably more likley to abandon the dog later in life..and a good looking (probably) small breed dog is more likley to be adopted (as opposed to a large ugly mutt which sits on the line too long and gets euthed).