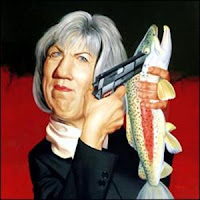 Did Gale Norton, Secretary of the Interior in the Bush Administration, sell out the environment for a cushy job with Big Oil?

That's what it looks like, and the Justice Department is investigating.

Norton works right now as an in-house lawyer in Denver for Royal Dutch Shell. In 2006, while she was still in office, her department granted three tracts in Colorado to a Shell subsidiary for shale exploration.

Also while in office, she had conversations with Royal Dutch Shell about future employment -- a clear ethical lapse.

Of course, nothing about Gale Norton was ever quite square.

This is a woman who used to be employed as a lobbyist for the National Lead Company.

Who suits up to work as a lawyer for a company than manufactures poison?

Consider Norton's list of "accomplishments" as head of the Department of Interior:

Gale Norton was not just toxic to the enironment -- she also seems to have surrounded herself with people who were "ethically challenged."

So am I surprised that Gale Norton is now under investigation for corruption by the U.S. Department of Justice?

Am I surprised that she sold out your public lands for her personal benefit?

Am I surprised to learn she is working for Big Oil?

No, no, and no. I would expect nothing less from Gale Norton.

An investigation of Norton is waaaay overdue. I have a friend who is a biologist for the Fish and Wildlife Sevice and, let me tell, it was very, very, very, very (you get the idea) long eight years for those folks.

I toured Norton around the National Zoo's CRC -- showed her our projects on native wildlife, migratory birds, endangered species recovery, and restoration ecology -- and was left wondering how someone so clueless about environmental issues could be selected to oversee Interior.

Personally I'm waiting for a bigger fish to fry. Namely one Dick Cheney who met with oil execs prior to setting energy policy.