What Happens When a Cat Meets a Coyote? 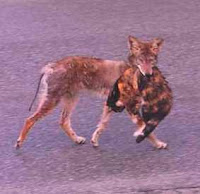 What happens when a cat meets a coyote?

Most of the time, it's lunch, according to The Journal of Wildlife Management which abstracts a new paper entitled: Observations of Coyote–Cat Interactions:

Coyotes (Canis latrans) pose a risk to domestic cats (Felis catus). We captured, radiocollared, and tracked 8 coyotes from November 2005 to February 2006 for 790 hours in Tucson, Arizona, USA. We observed 36 coyote–cat interactions; 19 resulted in coyotes killing cats. Most cats were killed in residential areas from 2200 hours to 0500 hours during the pup-rearing season. Single coyotes were as effective killing cats as were groups (>1) of coyotes. Documented cases of predators killing cats could encourage cat owners to keep their cats indoors and assist wildlife managers in addressing urban wildlife issues

I am reminded of the time I once read a letter to the editor in my local newspaper. Some cat owner was outraged that someone ran over their beloved pet cat at 3 in the morning. I smiled at the irony. Beloved indeed lol.

Looks like everyone could use a good dose of roaming coyotes. Maybe that would keep the cat population in check. Those mean coyotes!!!

I live in a small town that's made national news more than once for our large, problematic coyote population. The town is full of stories of free range pets (cats and small dogs) that 'mysteriously' disappear.

Between cars and coyotes, I'm surprised that so many of them survive!