The Tribe of the Dog 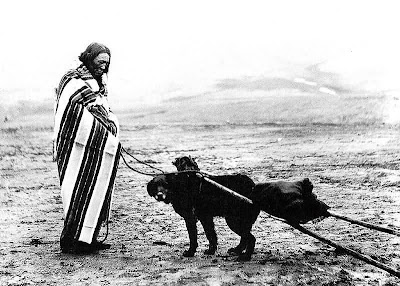 This piece is from the July 2009 issue of Dogs Today.


From a great distance the indigenous people of the U.S. appear be "American Indian," but as you travel west, you discover it's not one people, but many tribes, and by the time you get to North Datoka, the question is not whether you are Sioux, but what type of Sioux -- Lakota, Yankton, or Santee?

Much the same goes on in the world of angling where we also find tribalism at work. From a distance, it's all "fishing," but in fact the 12-year old bait-baller with a cane pole on the bank has a different world view than the 60-year old man with a deep sea rod trolling for shark off-shore.

In the world of dogs, it is much the same. People obsessed with dogs may fall into any one of dozens of over-lapping categories, and move from one tribe to another over the years.

To an outsider, it is all rather confusing, and the cacophony of bitter voices and conflicting perspectives is a bit overwhelming.

Pit Bull rescuers damn the lunatics at PETA who say the only good Pit Bull is a dead one.

Vegan cucumber crunchers curse dog show matrons and their pedigree pooches, arguing that with so many dogs in shelters, “Every dog bred is another one dead.”

The small hobby breeder, only 10 years in dogs, parrots a potted history made up whole cloth 100 years ago by a dog dealer. The problem is the “backyard breeder” he says, never defining the term, but speaking in the confident tone of one who is certain he is not one. He points to a classified ad for retriever pups, $250 apiece, and a phone number.

On the telephone the woman describes her dogs as “fur babies,” and says she is not one of “those horrible commercial breeders.” Does she have hip scores for the sire and dam? No, but she has papers, she says hopefully.

The commercial breeder has hip scores – at least for some dogs. He is rather vague. What breed do you want? He has 200 dogs and raises 15 breeds, most of them lap dogs raised in battery cages similar to those used for chickens. He points out that the floors of his cages are made of plastic mesh, not chicken wire, and he says his waste management system is “state of the art.” All 200 of the dogs are taken care of by his wife and himself alone. And are there papers? Oh sure! Kennel Club papers for one price, another registry for a bit less – whichever you prefer.

In a telephone conversation, the breed club President waves off the commercial breeder. Only a fool would look there for a dog he says, oblivious to the fact that the head of the American Kennel Club says he started in dogs this way, and that he thinks the financial future of the AKC lies in more puppy mill registrations.

And so it goes, in a round-robin of blame and questions, challenged ethics, and sniffing aesthetics.

The people roar, but is anyone listening to the dog?

One small idea is to look to original design. It is not hard to see what God intended. Left to their own devices, dogs devolve quickly to “pye-dogs” or pariah dogs weighing 30-45 pounds with short yellow coats and pointed faces.

What can we say about these natural dogs? Well, for one thing, none have the kind of crooked or “benched” legs common to anchondroplastic breeds such as Bassets, Dachshunds, Bulldogs, and the like.

None have the smashed-in faces common to brachycelphalic breeds, such as Pugs, Toy Spaniels, French Bulldogs, Boston Terriers, and the like.

None have long coats with wild hair cascading down their sides. All have erect ears.

Most of the wild canids are sized between 10 pounds (a small red fox) and 150 pounds (a massive wolf).

In all cases, inbreeding is sharply discouraged. The “lone wolf,” after all, not a myth – it is a very young or old male driven out of the pack to find a harem of its own or die trying. The same occurs with coyote, fox, dingo, and jackal. Mother Nature prefers an out-cross.

What do we hear if we listen to pedigree dogs?

The data here is not deeply hidden. Canine pet insurance companies keep vast data sets on breeds and cross-breeds alike, and they will tell you that mutts are healthier than Kennel Club dogs, and they price their premiums accordingly.

Not only is there less inbreeding among cross-bred dogs than among their Kennel Club analogs, there is also less morphological exaggeration.

With Kennel Club dogs, there is not only a tendency to select for morphologies unseen in nature, but there is also the requirement that these exaggeration be maintained in a closed registry system in which coefficients of inbreeding tend to drift upward due to popular sire selection.

Of course, what I have said here is not new. Biologists, canine genetic experts, and working dog people have been making these points for decades. But their quiet message has been drowned out by the foot-stomping of those with economic and political interests.

Much the same has occurred with indigenous people the world over.

Their concerns too have been blotted out by issues of money, power, and prestige.

"The native tribes? Who cares about them? The natives don't vote and they don't pay taxes."

And of course neither do the dogs.

But does that mean we should not be listening to them?

Does the welfare of dogs not matter at the top?

Who will speak for the tribe called Dog?
.

We can breed healthy, typey dogs. We just need to completely revamp our ideas of what "purebred" and "type" mean.

I like the term purpose bred. Here are pictures of ours. They look like the wolves guarding the sheep flock (and hens, pigs, ducks, geese, us...) They do both guarding and herding. Instinct molded with training and culture passed down from generation to generation. We're a farm. We selectively breed our livestock to improve their lines and we do the same with our working dogs. Our pack members are part of our working team in their own strata with their own hierarchy.

My herding dog is a cross of three stock management breeds. I saw her dam and sire, and have no reason to believe the 3rd breed is not present. She looks and performs in the field like a border collie, and over the years has demonstrated that she herds anything with skill. Thirty five dense pounds, pointy nose and ears, medium coat. She is cared for very well, but not at all babied. Vet visits have hardly been necessary for other than routine matters, shots/vaccinations. She is well into her 12th year. When strangers meet her for the first time, I still frequently get, "Is she a puppy?". Because her demeanor/behavior is good, and they have not seen her on stock, I assume that they believe she has the gait/motion/bright expression of a puppy. I agree -- she does. She herds cattle and/or sheep almost every week, and otherwise has a busy life keeping up with me. As far as I am concerned she is a purpose-bred purebred stock management dog -- created for performance. I have never bred or sold dogs.