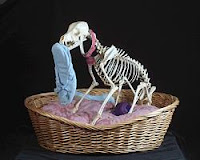 The RSPCA has put out a new 76-page science-based report which provides an overview of pedigree dog heath, and which concludes that exaggerated physical features and inherited diseases cause serious welfare problems in pedigree dogs, and that the Kennel Club has, for the most part, failed at its mission of protecting dogs.

To date, breeding practices and efforts by breed societies and kennel clubs have been ineffective at protecting the welfare of many breeds of domestic dog. Therefore, to safeguard the future of pedigree dogs, changes in breeding practices are urgently required, and for some breeds more drastic measures will be needed. All members of society, and all those who benefit from pedigree dogs, have a moral and ethical obligation to ensure that every action is taken to attempt to rectify the problem and to increase the health and welfare of future generations of pedigree dogs.

The independent report was commissioned by the RSPCA and was authored by a team of University-based veterinary specialists, practicing veterinary surgeons, genetics experts, and experts on canine welfare.

Among the key points made:

Want to read the whole thing, or just the summary? Terrierman has it all, and yes your breed is probably mentioned.

So I download the Pdf and do a search on standard poodles and bingo - Addison's disease, which I'm all too familiar with because my rescue guy has it - plus calcium oxylate stones, chronic pancreatitis, and antibiotic-responsive chronic diarrhea. My other standard - the one I had euthanized last summer at age 11 when he could no longer stand, who had laryngeal paralysis and could barely breathe anymore, who had two mast cell tumors removed - my "healthy" standard poodle, my perfect companion - loveable, liveable, laughable, laudable - the love of my life, dead....

I love the breed but my heart is aging and I don't know how much more of this I can take.

We must have a system that limits the number of litters a sire can produce. Too many dogs in these registries descend from a "most-used sire," and this is killing genetic diversity.

I was very happy to see that among the reforms the study actively promotes, along with opening up the registry system.

Miki -- If you would be interested in taking to a reporter -- you do not have to give your name -- shoot me an email at siriusdogma@gmail.com

Only mentions Factor VII in deerhounds? We have much bigger freaking problems than that! At least that one has a screening test, unlike EVERY OTHER GENETIC PROBLEM IN OUR BREED.

The table that lists breed-related problems only mentions those for which a DNA test currently exists.

If that's what is being referenced.

[rather than publicize it, I prefer to hide my breed at an undisclosed location]