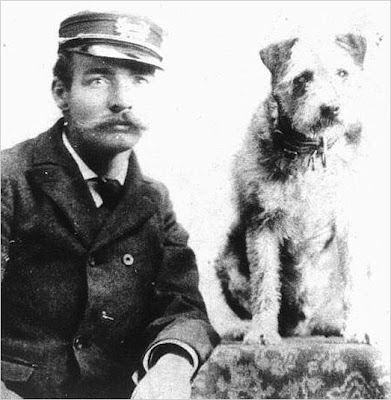 Owney was a stray terrier mutt who, back in 1888, wandered into the Albany, New York, post office.

The clerks, too busy to chase him away, let him stay and he eventually fell asleep on some mailbags and became attached to the smell or texture of the satchels.

Owney began to follow the mailbags and soon he followed a few of them right out the door to the train station.

Not stopping there, he hitched a ride with a few trains and he eventually traveled with the mail bags not only all across the state, but all across the country, collecting little tags and trinkets on his collar as he went.

In 1895 Owney somehow found his way on a boat to Alaska, and from there he traveled around the world, first to Japan, and then through the Suez Canal to Europe, before returning back to Albany.

See the video at the National Postage Museum web site.

On June 11, 1897, Owney boarded a mail train for Toledo, Ohio. While he was there, he was shown to a newspaper reporter by a postal clerk.

The story is a little vague from there on out, but apparently Owney became ill-tempered, bit someone, and was somehow shot for his troubles.

Distraught mail clerks raised funds to have Owney taxidermied, and he was presented as a slightly-bizarre mascot to the Post Office Department's headquarters in Washington, D.C.

In 1911, the department transferred Owney to the Smithsonian Institution, where he has remained ever since.

Today Owney is on display in the atrium of the National Postal Museum, which is located in the old Post Office building, next to Union Station, in Washington, D.C. 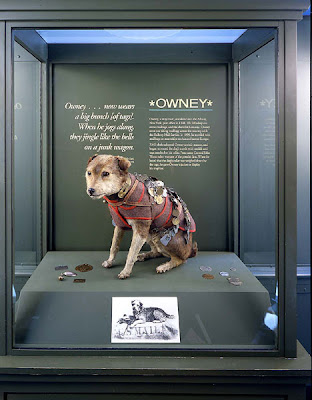 That taxidermy job was pretty good, but have you ever seen the taxidermied turnspit?

Do you think it's possible that some of the fancy "terriers" are really just modified strains of turnspit? I mean once the turnspit's profession was no longer legal or necessary. What were these people going to do with these dogs?

I think they turned them into fancy pseudo-terriers.

That dog resembles a "puddin' Jack Russell" that belong to some relatives of mine. His tail was docked, but he was marked exactly the same way. He even had the same ear carriage.

You know terriers better than me, so what do you think?

Yes. The Glenn of Imaal was a turnspit dog and they STILL haven't found a purpose for ot beyond that arena. There were, however, a LOT of different kinds of turnspits -- not just small wheels for fire spits, but also big treadle rigs for churning butter, threshing, etc. Almost every kind of small and middle-sized dog was used, but mostly mutts (almost all dogs were crossbred of pedigree unknown only 175 years ago). A lot of terriers were also used as cart dogs to guard milk, bread, meat and produce wagons from kids, thieves and other dogs. I will post a few pictures of the treadles and spits used -- a lot of variation. Not sure how many pictures I have any more -- some good stuff went with a hard drive loss a few years ago :(

The meanderings of a history hound said...

Please DO post pictures of the treadles and spits used. I participate WITH my dog in a lot of historical reenactment events, so I love showing how dogs worked in different time periods.

My daughter has almost earned her own dog, when she does, she is getting a small terrier that she can hunt with and that can fulfill different jobs including turning the spit.