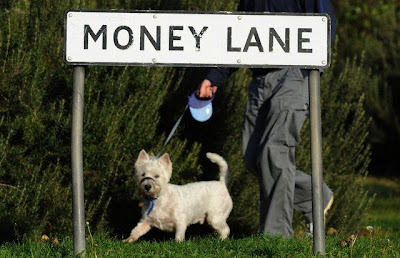 Back in April of last year, I wrote a piece entitled Is Your Veterinarian Clean? Don't Count On It in which I noted:

Most folks are so oblivious to how human health care works that they do not even wonder why their doctor put them on Zocor rather than Lipitor for cholesterol, or why their surgeon installed a Zimmer knee rather than a Stryker knee. Why would a psychiatrist prescribe Zyprexa for psychosis, when another drug has fewer side effects and is cheaper? Why does the ambulance turn left to deliver them to Mercy General, rather than right to deliver them to Baxter Hospital Center?

The answer, in nearly every case: kickbacks, payola, and other unnamed "conflicts of interest."

And this is human medicine, which is highly regulated, and where kickbacks, self-referral, upcoding, and prescribing medically unnecessary services are clearly illegal and punishable by fines that can rise to millions of dollars.

Does this kind of stuff occur in veterinary medicine as well? Of course. There is no magic line between human health and veterinary health.

Well, it turns out I may be a bit psychic. This afternoon, The New York Times notes that:

Eli Lilly, the drug company, is expected to agree as soon as Thursday to pay $1.4 billion to settle criminal and civil charges that it illegally marketed its blockbuster antipsychotic drug Zyprexa for unauthorized use in patients particularly vulnerable to its risky side effects.

Hmmmm .... Is it too much to wonder whether this kind of thing might also be occurring in the arena of veterinary care? I have given examples before, of course. There is the billion dollar Heartworm scam and the billion dollar business of Lyme Disease testing and treatment, and the fantastic growth in cruciate ligament surgery. The veterinary trade magazines are not shy with their advice: They say it's time to tip-off the rubes.

And as for cost of care and quality of care, the evidence is in: they have nothing to do with each other.

Veterinary health is far less regulated than human health care, and as a consequence there is even less incentive to do the right thing.

The American Kennel Club has now gotten into the veterinary referral business, and both vets and the AKC are now in the business of selling veterinary insurance.

The veterinary insurance industry pays a kickback to the AKC and to referring vets, while the presence of pet insurance softens the economic blow from rapidly rising veterinary costs.

In essence, what you have here is a feed-back loop, in which the customer may be triple-gouged; first by veterinarians who bill-pad, and then by the insurance industry which is making a profit by simply monetizing high veterinary bills into monthly insurance premiums. Finally, the very presence of pet insurance means vets have less incentive than ever to hold down prices and a ready-made rationalization to suggest more testing, and more extravagant health care interventions.

No, of course not!

That said, all vets are human, and they are not any more (or less) honest than car mechanics, human doctors, or anyone else.

Caveat emptor with all vendors, and especially when you are being "handled" by a "vet tech" or receptionist whose job description it is to set you up for "additional services."

To be clear: these front office people know next to nothing and generally have been hired to give the real veterinarian cover in case the client calls "bullshit" to the veterinary equivalent of "Can I supersize your meal?"

A word to the wise should be sufficient: use Google to get informed and cut costs, do as much basic veterinary stuff as you can yourself, and negotiate pricing with the veterinarian, not the receptionist.

Finally, never forget the best money-saving advice ever, in terms of canine care: Breed choice matters a hell of a lot. For more on that, read Making and Breaking Dogs In the Show Ring and peruse the canine health links in the blog roll at the right.

I recently came across your blog and have been reading along. I thought I would leave my first comment. I don't know what to say except that I have enjoyed reading. Nice blog. I will keep visiting this blog very often.

I admit to not reading this entry quite as thoroughly as I read others, but I just wanted to comment on the picture you used to introduce it:

The Westie is wearing a head-halter device, unless there is something else to account for the black strap across its nose.

The owner is holding a Flexi or some other type of retractable lead.

This dog may very well end up with some serious injuries (or worse, death, immediate or not) one day should it gain enough momentum and the owner decide to click that 'stop' button or the dog run out of lead. I am not a fan of either piece of equipment, but I cringe when I see the two combined as in this case.

I don't know if this was intentional, but the "Money Lane" sign is very appropriate...just not a fan of the poor dog under it! Indeed if he does survive a cervical spinal injury, he WILL more than likely be a money pit for his owner.